Menu
Home | Culture | 10 Sports That Were Born in Ancient Greece 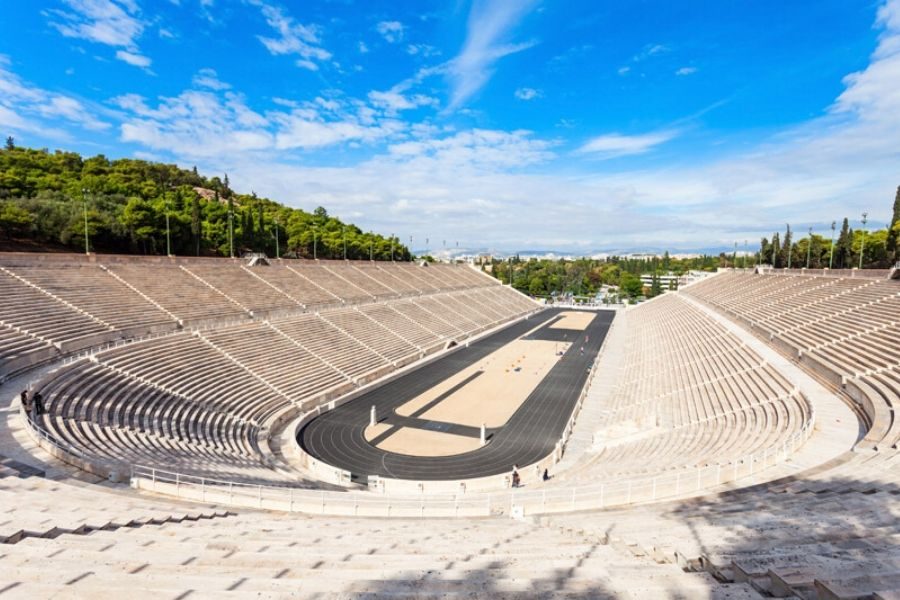 Typically, as we head into the summer of 2020, sports newspapers would have been chock-a-block with articles on potential gold-medallists and the glory of sport. Time to travel all the way back, to the very beginning, to the very origin of some of the sports. Did you know that these popular modern sports have their roots in ancient times?

Initially, the Olympics were a one-day event until 684 BC when the games were extended to three days. Later, they were extended to five days. Most of the Olympic Games as we know them today were either invented or practised by citizens of ancient Greece. Greeks loved sports, especially contact sports, and they built public gymnasiums where people would train and compete. The first Olympics were held in Olympia, a Greek City State in 776 BC as part of religious functions in honour of Zeus. The games were held after every four years, a tradition that remains today although more days have been added to the event to accommodate the many games of modern Olympics. 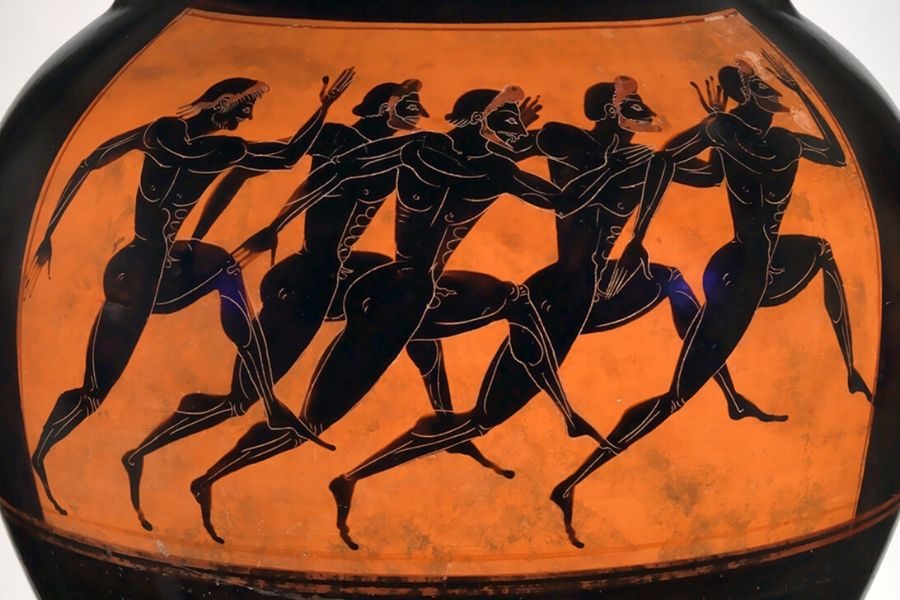 Pentathlon is a word of Greek origin formed by combining two words, pente (five) and athlon (competition). The Pentathlon is a competition with five different sporting events. Pentathlon events can be traced to Ancient Greek Olympic Games in Olympia city-state where it included the long jump, javelin throw, discus throw, stadion (a series of short races), and a wrestling match as the main event. Because of the extra skills and strength needed for the pentathlon, soldiers comprised the largest number of competitors and winners. However, due to the evolution of the event and the need to make pentathlon less bloody, modern pentathlon is more focused on skills of shooting, swimming, fencing, equestrianism, and a cross country run. Each of the five events gathers different points, and the overall winner is usually the one with the most points. 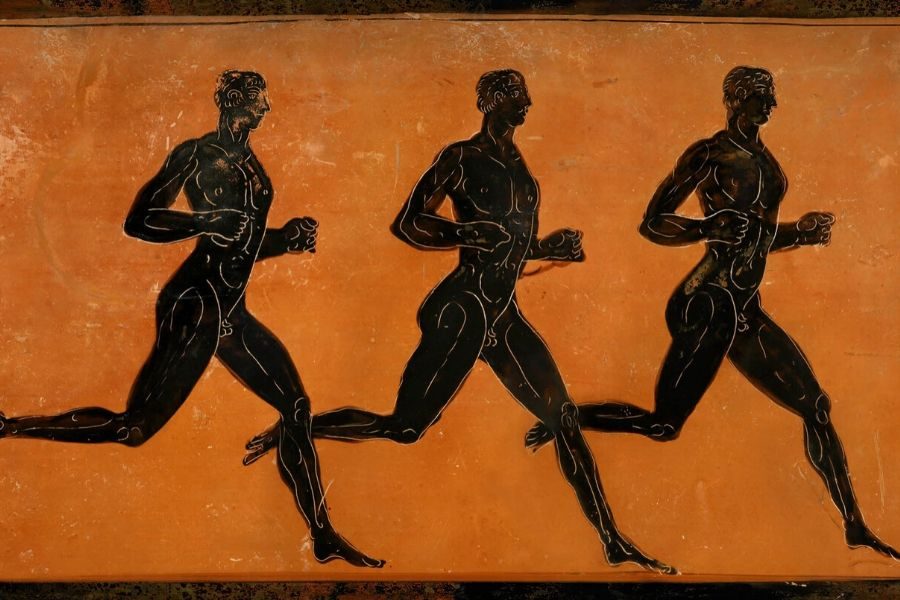 Running is an old sport that does not include contact. In ancient Greek culture, running contests included speed tests of approximately 219 yards known as the stade race, the diaulos which was a 437-yard race, and a longer race called dolichos. During the ancient period, Greeks were good runners. In the modern Olympics, running was the most diversified event with different races ranging from short races to mid and long races. 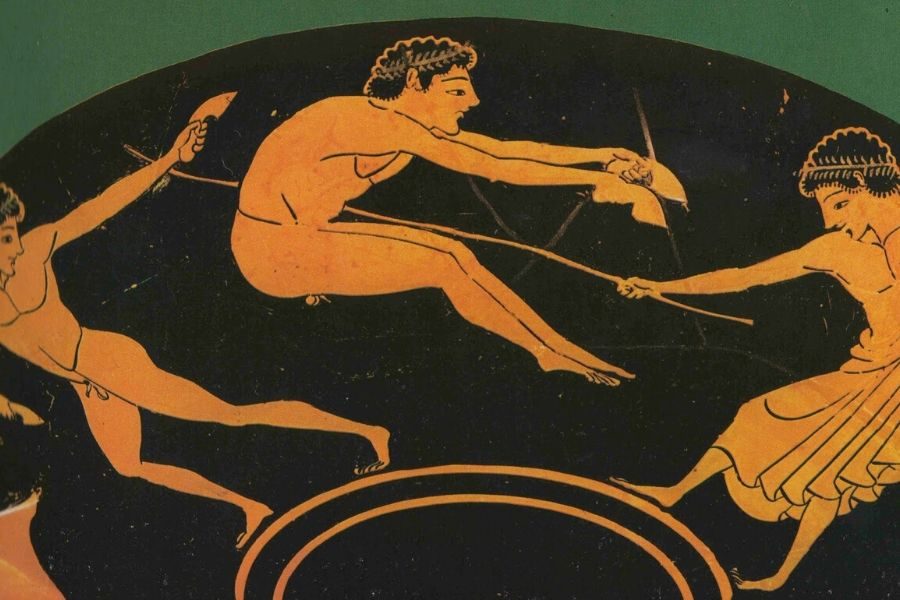 The Ancient Greek sport of jumping is what is known as long jump, broad jump, or horizontal jump today. The sport has its roots in the ancient Greek Olympic games. During ancient Greek periods, athletes used to hold stones or weights in their hands during the jump and release them by pushing them backward towards the end of the flight to propel them forward. The long-jump is the only known jumping event in Ancient Greece, and most sports in Greek city-states were used as training for combat. The long jump symbolized the ability to cross some form of obstacle. The jump has been a modern Olympic track and field event since 1896 with athletes settling records never since seen in modern times. 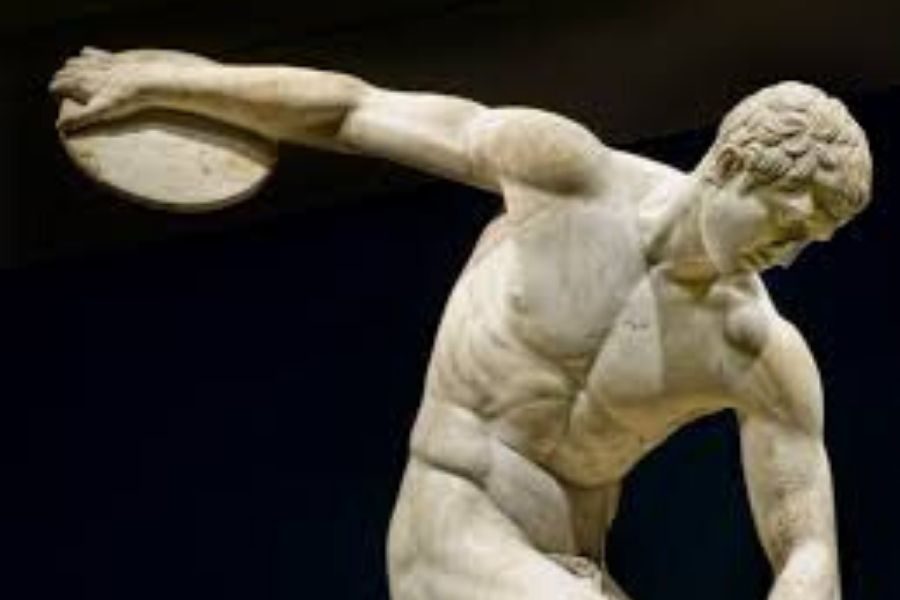 The discus throw is traced to 708 BC Greek pentathlon activities. The discus was originally made of stone. Iron, lead, and bronze were used as raw materials for the discus during different periods of time in Greece. The Myron statue Discobolus suggests that the sport may have existed from as early as the fifth century BC. The technique used in ancient times is similar to the technique used in freestyle discus throw today. In today’s society, the sport is a track and field event that involves throwing a heavy circular disk. 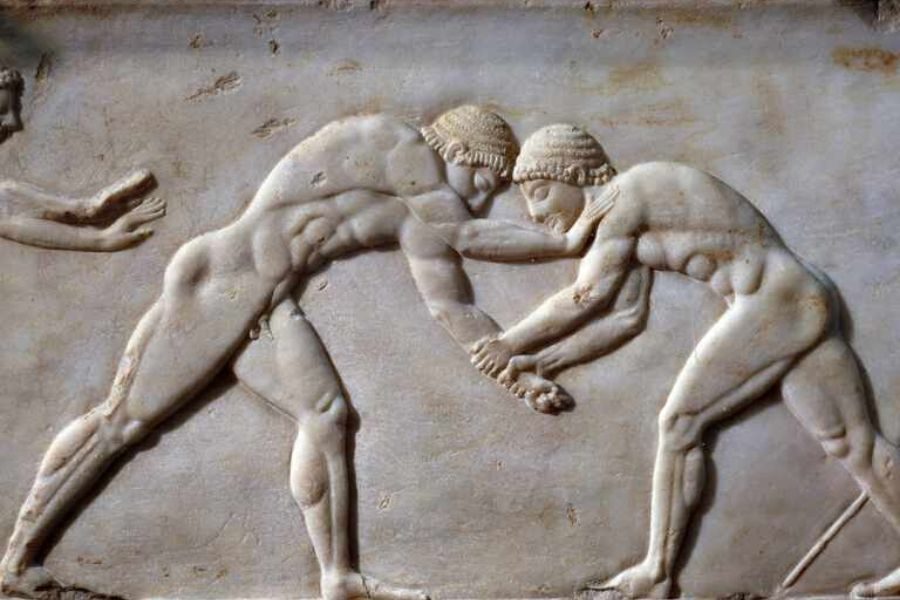 Wrestling is one of the oldest combat sports and is loved by millions. Wrestling is a contact sport involving handling techniques like clinches, fighting, takedowns, joint locks, pins, and punches among others. In ancient Greece, wrestling was used as a competitive sport in the Olympics as well as entertainment for wealthy people. Today, wrestling techniques have found their way into law enforcement hand to hand combat training. During the ancient Olympics, wrestling served as one of the main event sports, and a fight only ended when a contestant admitted defeat or was unable to continue. 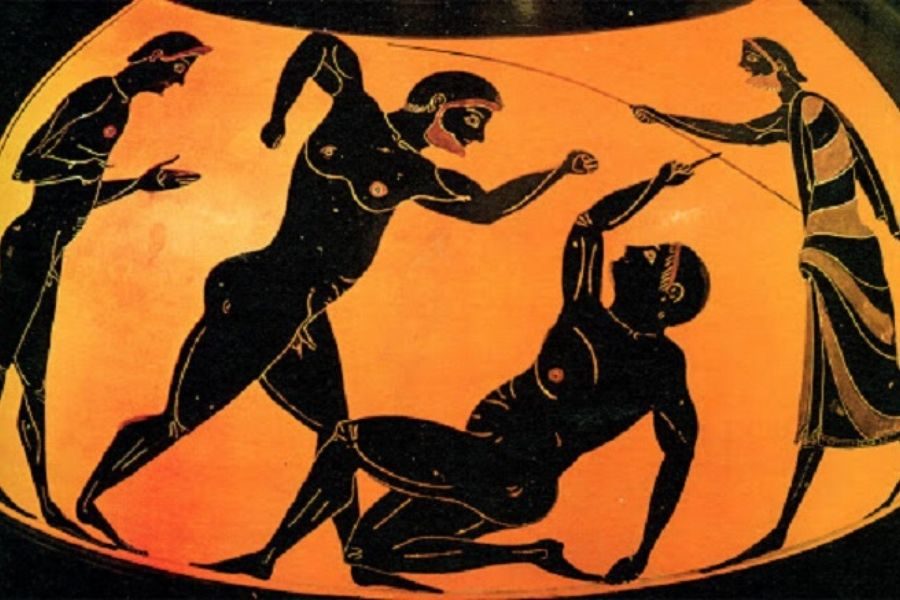 Boxing as a sport can be traced to the 688 BC 23rd Olympic games in Greece. During the ancient Greek times, boxing was one of the most popular games in the Olympics. Boxers wore straps (himantes) around their hands to protect them. Fighting would go on until one of the fighters acknowledged defeat or could not continue. 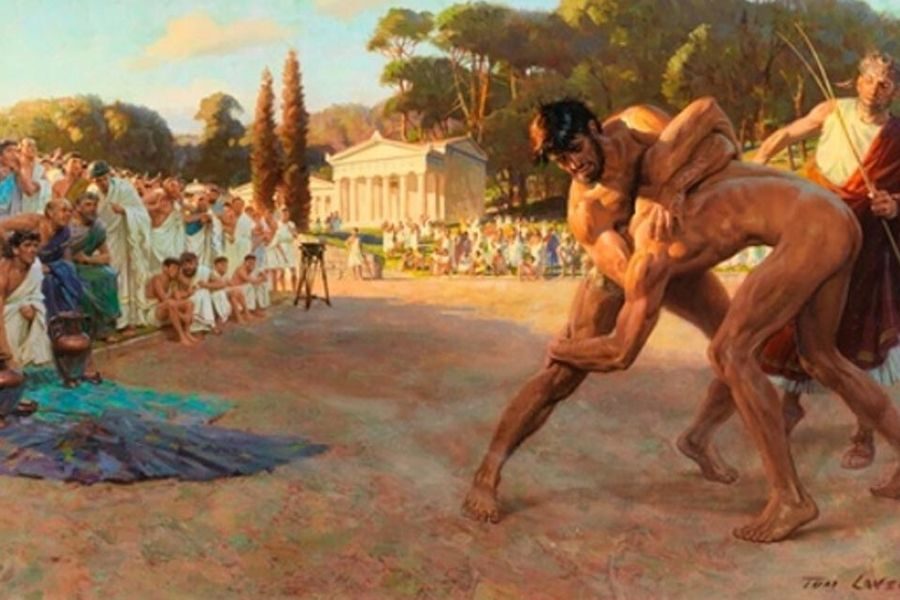 Ancient Greeks believed that Heracles and Theseus developed pankration as a byproduct of having to use boxing and wrestling techniques in their fights. Both men used this skill to overcome mighty adversaries including beasts. In ancient times, pankration was a primitive combat technique that combined boxing, wrestling, and choking skills. Introduced into the Greek Olympic Games in 648 BC, this was one of the toughest sports with minimal rules. Pankration (all power) was a submission only sport and many fighters died in the arena. 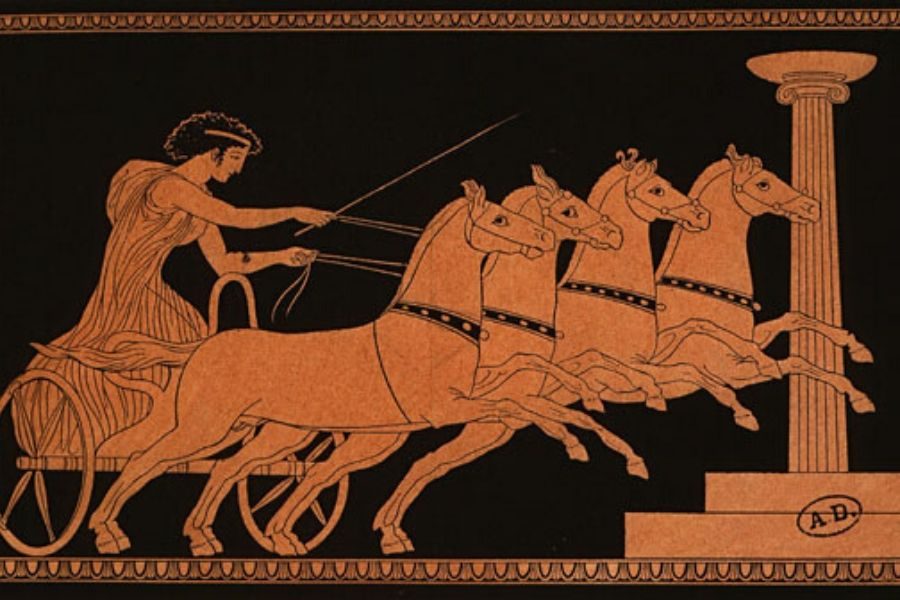 In the early Greek City-States, equestrian events included chariot and horse races in hippodromes. A hippodrome was an outdoor theatre where many important functions and racing sports occurred. Although the Greeks practised equestrian events in the early Olympics, the sport was dropped somewhere in time but found its way back to the summer Olympics in France in the year 1900. During these events, men and women compete together on equal terms. Events include Polo competitions, the Grand Prix Jumping, and the High Jump. Today, these events have seen a transformation in rules and regulations.

Only a few days left to submit your entries!