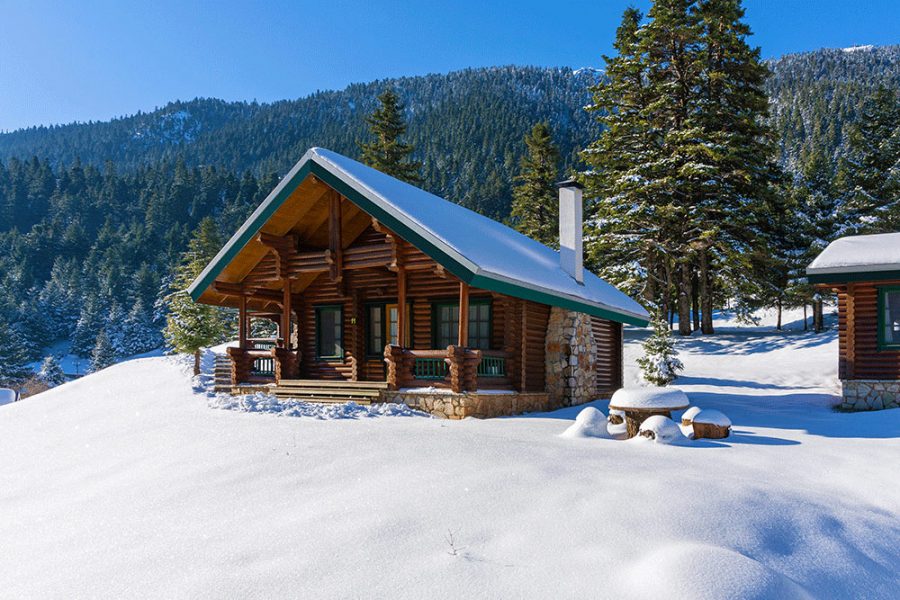 Greece is not just a summer romance. From stylish ski resorts and historic city hamlets to quaint alpine escapes, mainland Greece is awash with irresistibly inviting winter wonderlands. As the evenings close in and temperatures fall, trade balmy beaches and long lunches by the sea with luxurious lodgings in dramatic locales where you can be as active – or as indolent – as your wintery heart desires. Insider shares five of our favourite cosy winter retreats. Let it snow!

In the heart of historic Kavala, in northern Greece, exists this masterfully-restored palace that seems to have arrived straight from a fairytale – but with enough 21st century luxuries to satisfy any modern sybarite (think Bvlgari toiletries and Molton Brown candles). Built in 1817 for Mohamed Ali Pasha, Imaret is a rare monument to late Ottoman architecture and is set amid 3,000 square metres of tranquil gardens and majestic arcades, with heady views over city and sea. 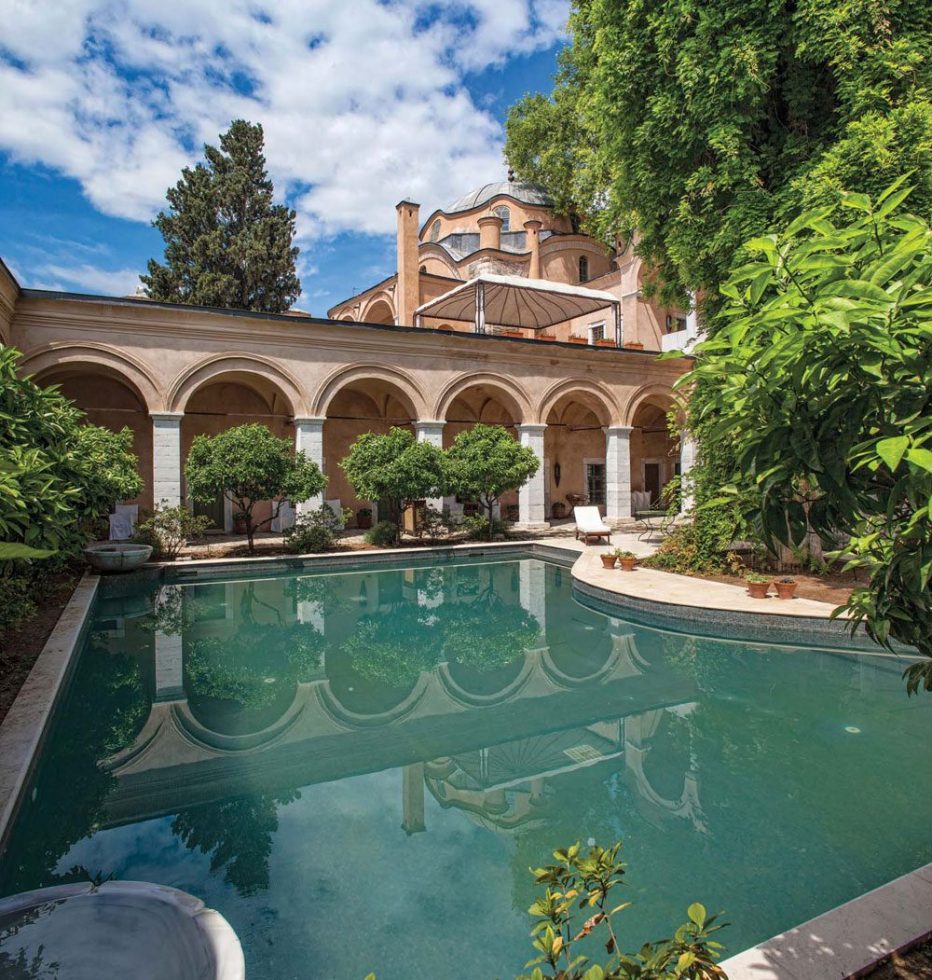 Indulge in the neglected ritual of afternoon tea served in original Haviland-Limoges porcelain. Settle in with an enriching tome on art, travel or history in the impressively-stocked library. Or treat winter-weary spirits to an invigorating interlude at the Imaret’s original hamam where you can recreate 18th century bathing rituals such as flower and spice baths and massages of exotic oils or fruit and nut scrubs. 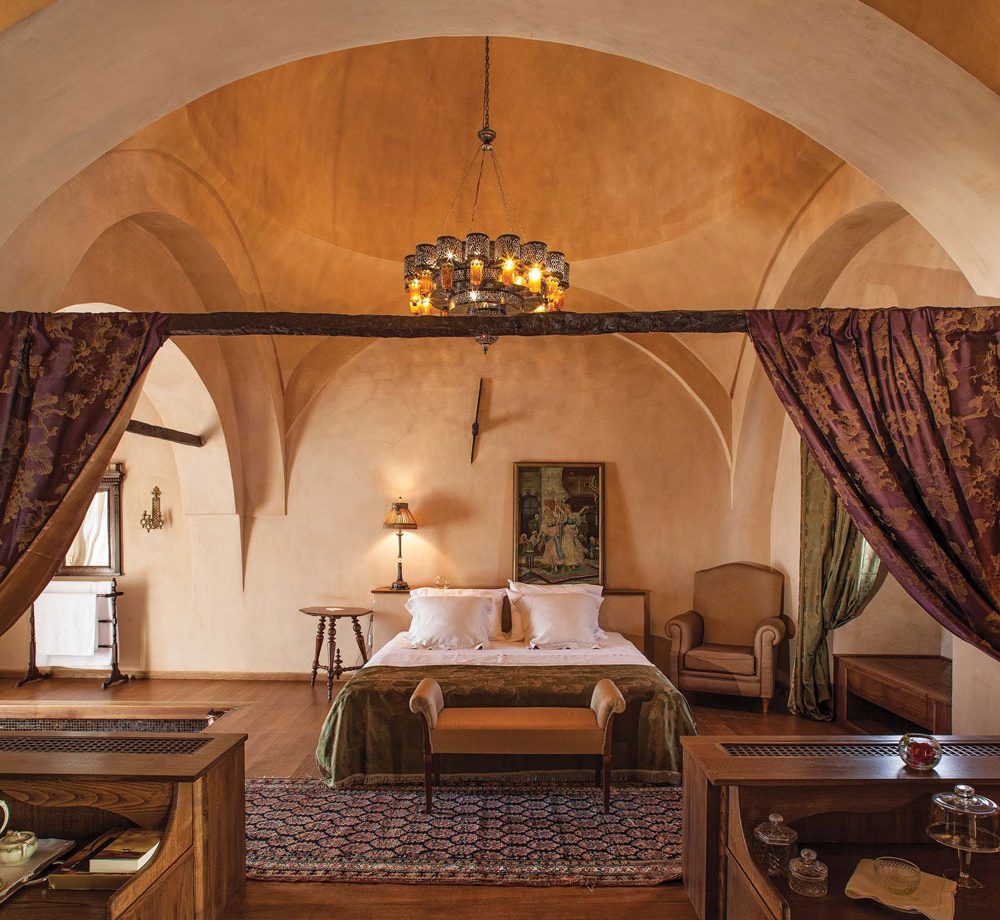 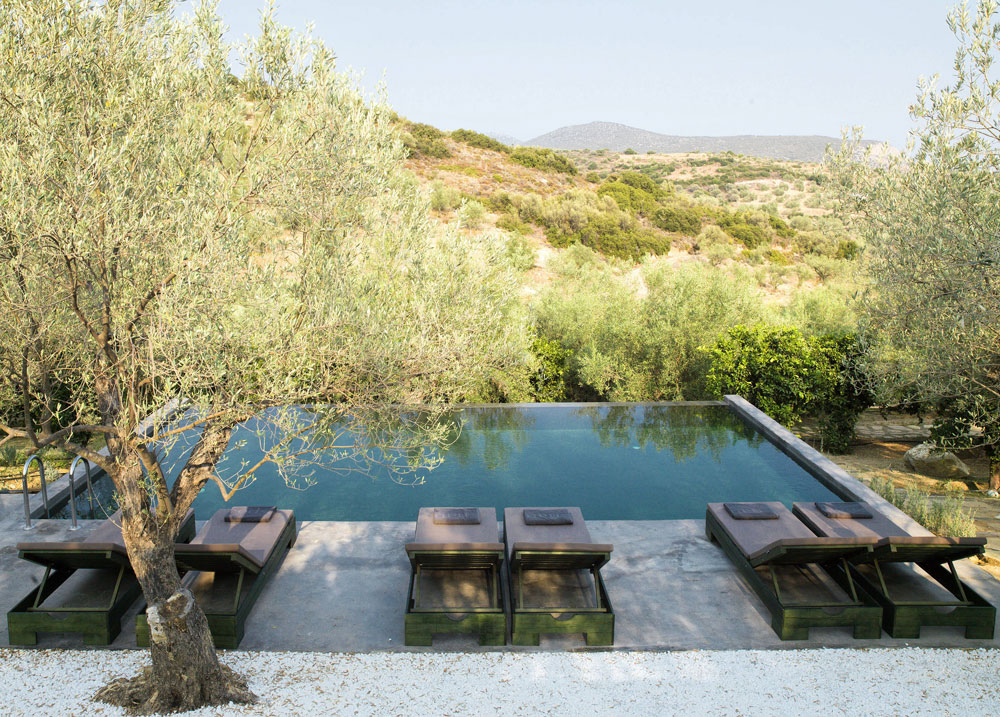 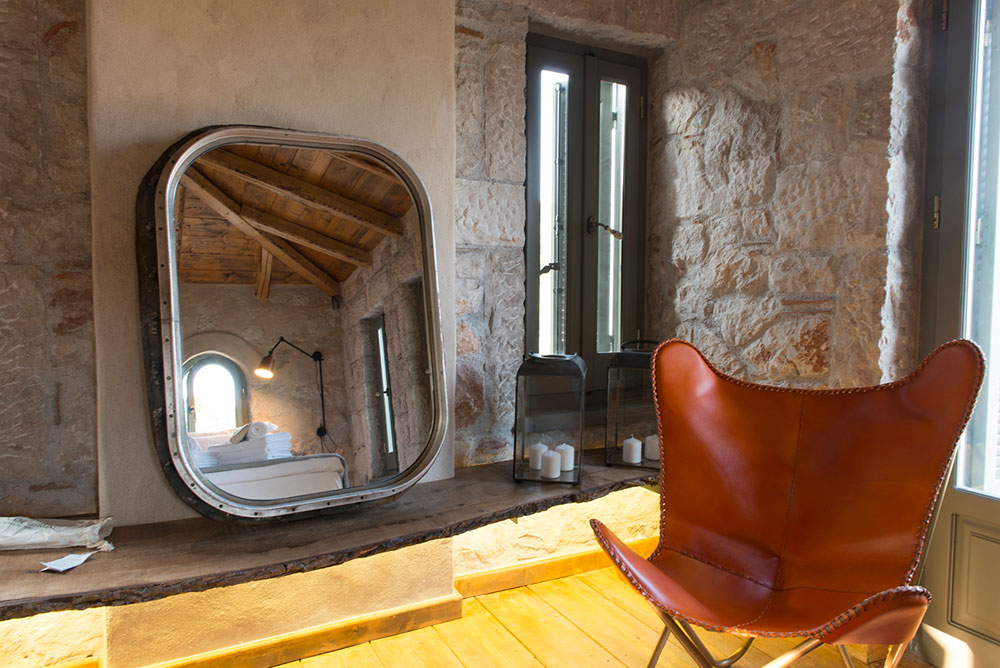 All hail the Queen Bee of the Arachova winter whirl.  Yes, there may be newer, more-boutiquey arrivals in town now. But they just can’t compete with this well-bred favourite: Elatos still retains its crown for fashionable Athenians who love the sociable vibe, beautiful forest setting and excellent leisure facilities (the Club House boasts a fabulous indoor pool and a terribly chic lounge bar with cinematic views that wouldn’t look out of place in Val d’Isère). 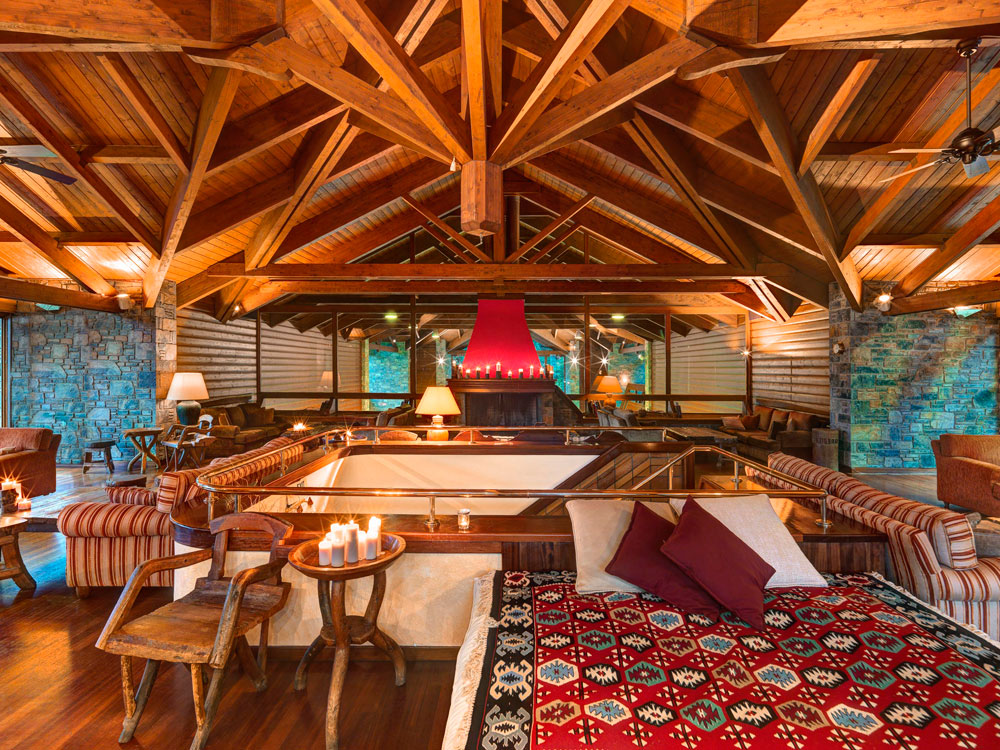 Nestled on the woody slopes of Mount Parnassos, Elatos is a village of classic and spacious wooden chalets, catered to by friendly and accommodating staff, and well located for the popular Parnassos ski centre. Social scene aside, Elatos also organises a raft of active alpine adventures and wellness experiences year-round, such as nature hikes, yoga workshops and family-themed weekends. All of which makes this Arachovian institution a joy to experience whenever the weather outside is frightful. Or pretty much anytime really. 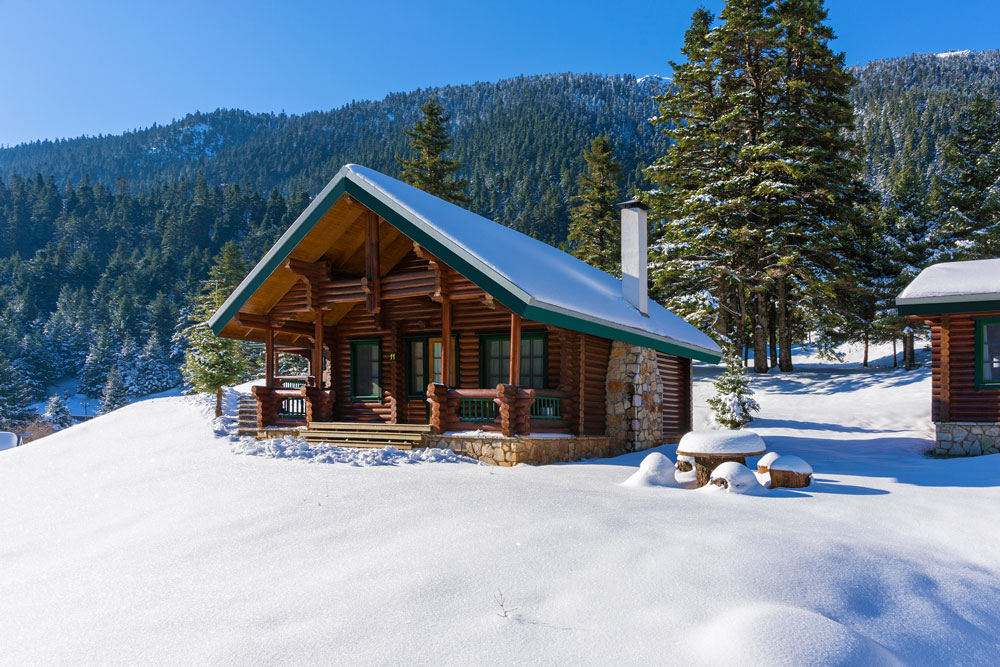 In winter, the enchanting village of Metsovo looks just like a painting. One of Epirus’ most popular tourist drawcards, visitors immediately fall under the spell of the town’s balconied mansions, stone drinking fountains and snow-blanketed squares. Tucked away in a pristine pine forest strewn with walking trails and picnic nooks, and towering over all this loveliness, is The Grand Forest retreat. Here, the simples pleasures of an alpine escape are as elevated as your lofty location (1350 feet actually). 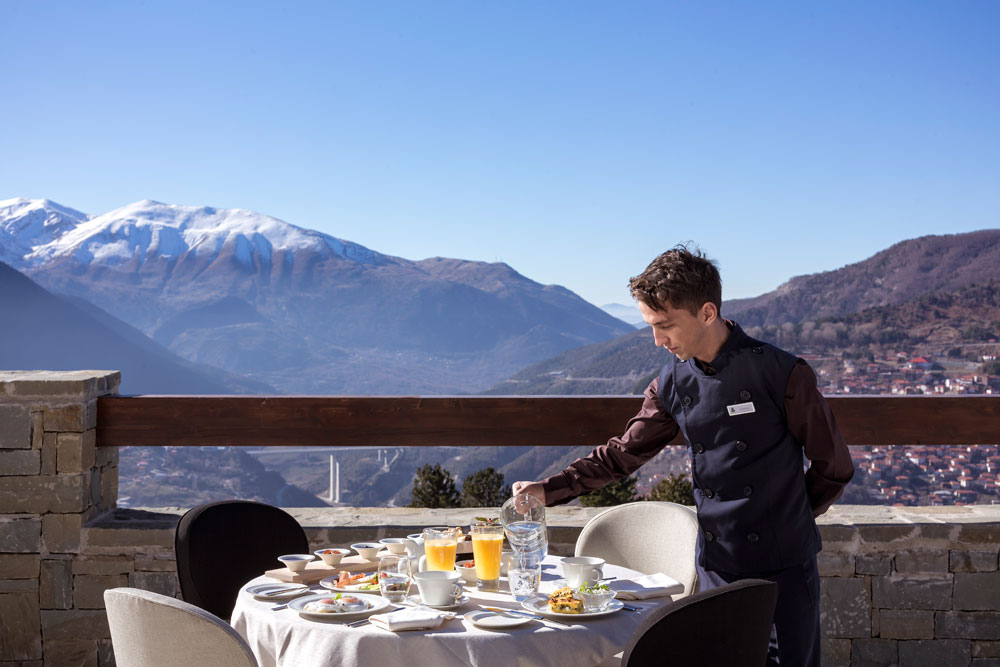 The culinary genius of chef Ettore Botrini has been enlisted to create a menu that reflects Metsovo’s rich gastronomic traditions and delicious local produce. Meanwhile, the luxurious Fontus spa, named after the Roman God of Springs, has built its state-of-the-art wellness treatments around revitalizing local herbs. Which makes Grand Forest a perfect destination for those seeking a detox holiday too (although frankly, in Gourmet Metsovo, that seems rather a waste!).

Legend has it that Zeus was so besotted with the bewitchingly beautiful Semeli that he transported her onto the slopes of the Pieria mountains (miles away from her native Thebes) so that he could admire her from atop his throne on Mount Olympus. Named after the legendary princess, Semeli, perched 1050 metres high on the Pieria mountains, enveloped by forests of beech, oak and fir trees offering mesmerizing views of Mt.Olympus and the unspoilt Thermaic Gulf below qualifies as a bucket-list getaway. 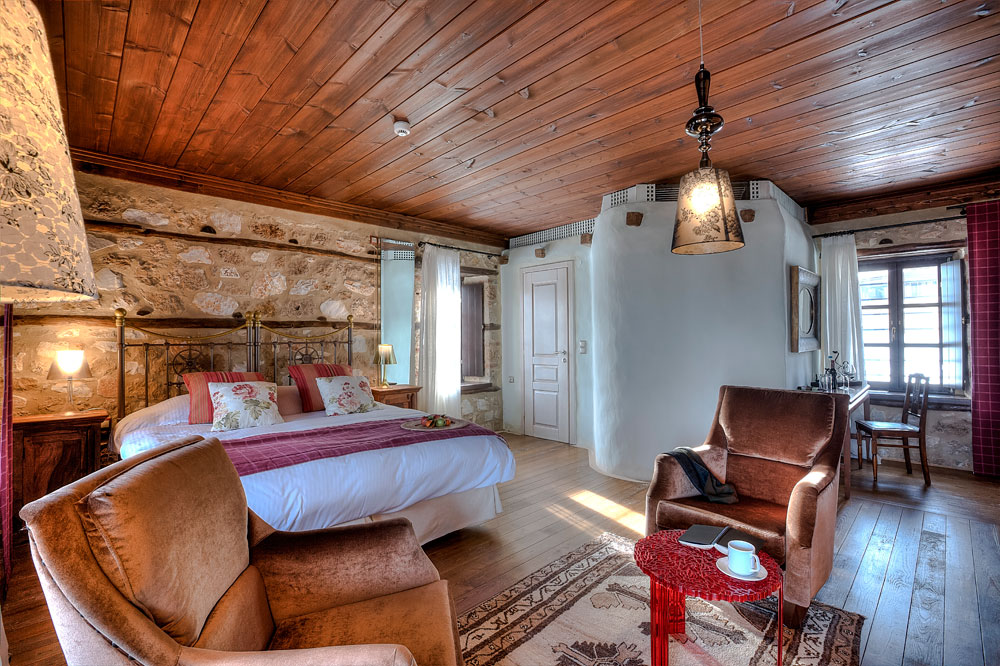 The smell of crackling wood, gourmet cuisine, après-ski pampering and designer interiors (Philippe Starck chairs and earthy Bukhara rugs), lend Semeli a warm, inviting vibe. A mere 5 kms away from the ski resort of Elatochori, here is a great way to spend a guaranteedly white Christmas while slaloming down the slopes. Outdoor options range from a leisurely walk in the forests to water rafting at the Enippeas gorge and hiking, trekking and rock climbing on Mt. Pieria and Mt. Olympus. The ski centre at Elatochori is among the newer and better-organised winter sport venues in Greece. For the culturally inclined, Thessaloniki is little over an hour’s drive away; the royal tombs of Vergina and archaeological finds at Dion and Pella are about 45 minutes away. 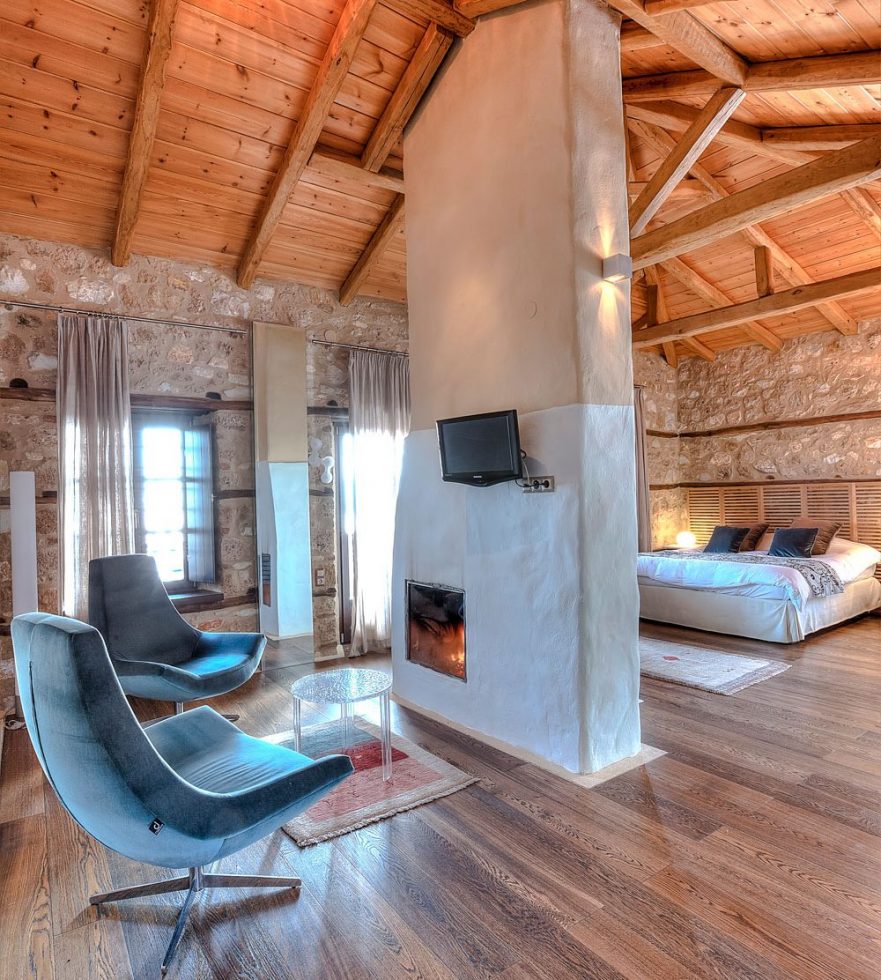