The Heart and Soul of a Medieval Bakery in Mykonos 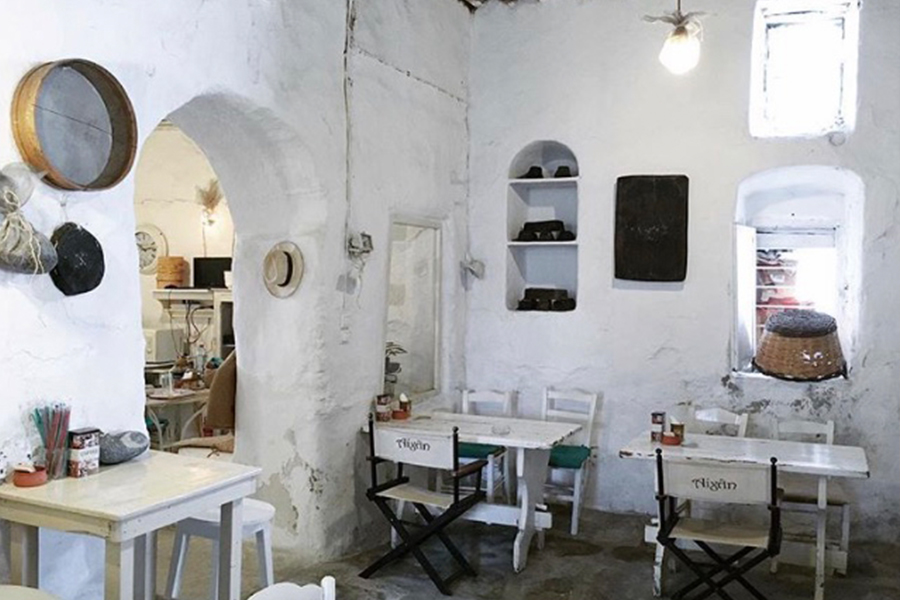 The bakery sits below street level

Discover a different side to Mykonos, far-removed from the glitzy image of the island. One where the smell of warm, freshly baked bread is as seductive as the island’s hedonistic charms. Sue Webb, who found herself happily stranded in Greece, unravels an underground gem in Mykonos – a medieval bakery. Chora’s Wood Bakery promises good old-fashioned hospitality in a Covid-world.

No doubt I’m not the only one who feels as though they’ve lost their bearings this year.  A few weeks ago, hopelessly lost in the whitewashed labyrinth of Mykonos again, I’d had a gutful of feeling as Nan would say, at sixes and sevens. Stopping for a moment to take a deep breath, I caught a hint of something familiar.

Carried by the mischievous northern winds of the Cyclades came the enticing smell of home baking, and sure enough, just around the corner, tell-tale flakes of phyllo deliciously sign posted small narrow steps leading down to an almost hidden kitchen.

It offered sanctuary from the liveliness of the bougainvillea-laced boulevards above, and a welcome as warm as the pastries being brought from the oven.

Still trying to shake the last remnants of lockdown sleep patterns, I ordered breakfast shamefully close to midday.  ‘Greek breakfast is an early lunch,’ smiled Cloe, the owner and curator of what has been dubbed a ‘Parthenon of wood bakeries.’ She is softly spoken and elegant, her hair gathered turban-like in simple cotton cloth.

The heart and soul of this place has been a long time in the making, and it wrapped itself around me the moment I walked in. Generations ago, the bakery relied on the wheat and flour ground in windmills fuelled by the Meltemi, the gusty winds I could still hear causing havoc above. 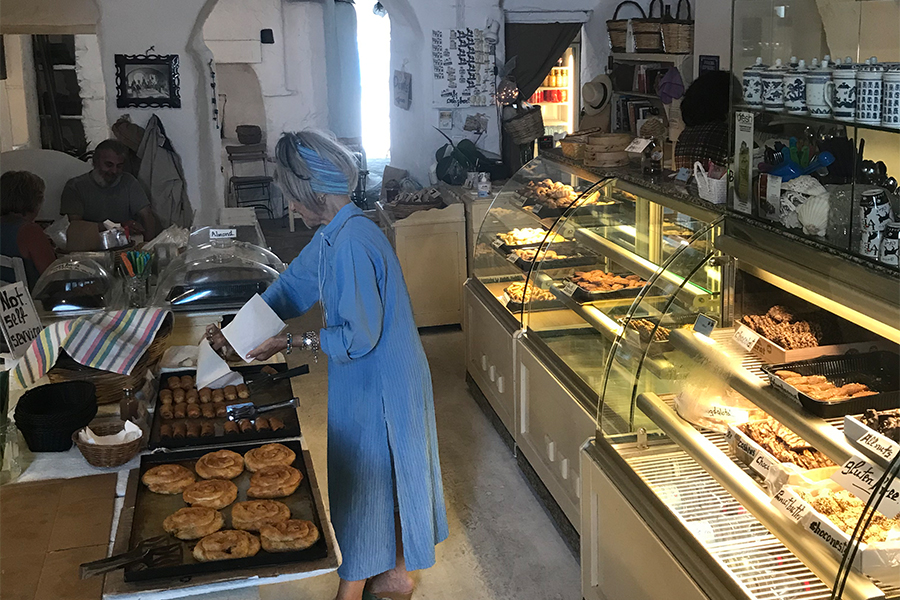 Cloe selects a range of pastries

Now, the disused 16th century windmills are a popular tourist site, and an iconic reminder of the island’s agricultural past. They sit quietly, soaked at dusk by saffron streaked skies, custodians of the history that Cloe and her husband George are trying to preserve.

He still dries the ‘sea bread’ or rusk which once supplied the French Armadas during the Napoleonic wars. Baked three times and good for up to a year, seafarers simply dipped the rusks into the sea to soften them on their long journeys across an untamed Aegean.

‘I studied languages and art history, and when I first saw the shop, I said to myself, I think it needs me,’ Cloe said. ‘To us, the bakery is like a church,’ she explained, and I knew what she was getting at as we sat together breaking open the warm cheese Tiropita, the pastry crumbling through my fingers.

With her understanding of traditional architecture, and George’s skill in artisan baking – a family trade of some 200 years – this medieval bakery has become a working sculpture. Made by hand with stone, hay and mud, it is a witness of their commitment to authenticity and provides the understated warmth and welcome of a Greek family kitchen. 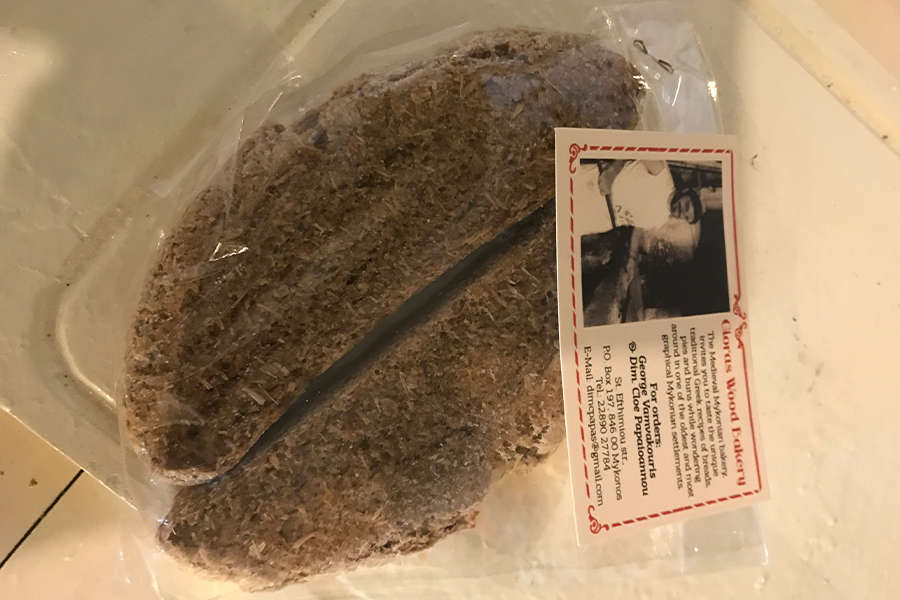 And like most Greek kitchens, the stories are as important as the food. I joined a young woman named Danae and her mother on a simple bench near the hearth of the old wood stove and listened to the stories about her grandmother who played hide and seek through the bakery as a child.

‘In Greece, in the old days, people would not enquire of a stranger Where are you from? They would ask instead, whose are you? The family name was important for determining where you fit in.  For example, my family name, Kouka, comes from the Greek word Koukia, meaning broad bean. Mine is the story of a thief, exiled to Mykonos from Crete for stealing broad beans.’

I could think of worse punishments, I thought, and as Danae laughs about her namesake being that of a broad bean thief from Crete, it’s obvious that she has a strong sense of place and family here. 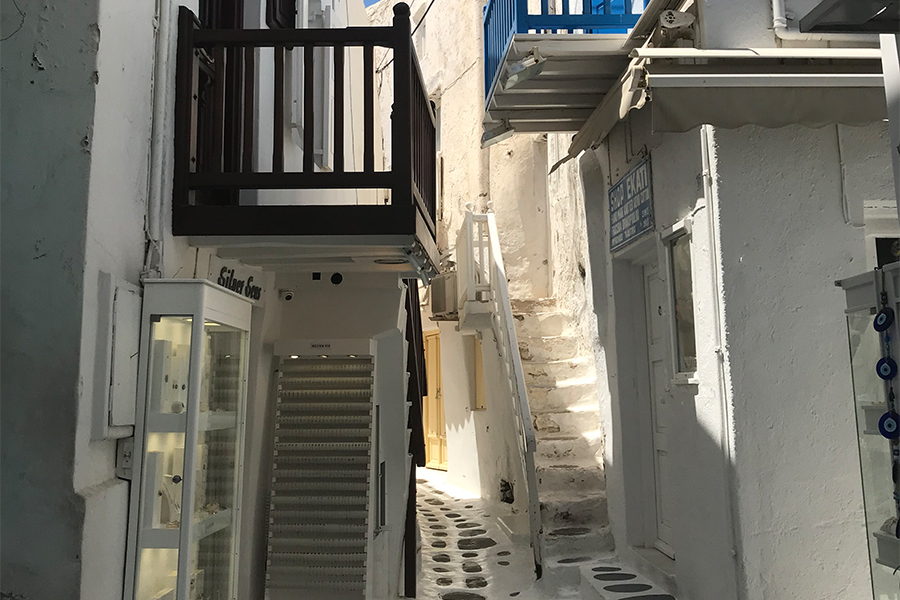 Everyone gets lost in Mykonos, a seductive hodgepodge of limewashed walls and dead ends, intended to thwart pirate attacks and raids carried out in the past. This early town planning remains very effective, and I remarked sympathetically that I knew how the pirates felt.  I’d never once been able to enter the Old Town, or Chora without getting hopelessly lost.

‘It is a clever design,’ she agreed.  ‘Have you noticed the little balconies that jut out over the narrow lanes as you walk beneath them?’ Danae asked. ‘They were built close together so that neighbours could jump from one to another to escape danger if pirates got into the village. The villagers had the advantage of knowing the way out.’

Having regained my stamina, I took this as a cue to resume my own exploration of Mykonos, with its smorgasbord of chocolate box lanes and blue hued walkways.

Too many pastries later, I bid my new friends farewell. ‘Now, make sure we don’t lose you,’ they said as I took my leave.  No guarantees I’m afraid, I thought as I breathed in the history of this underground bakery which has survived pirate raids, attempted Turkish invasions, and now a global pandemic. 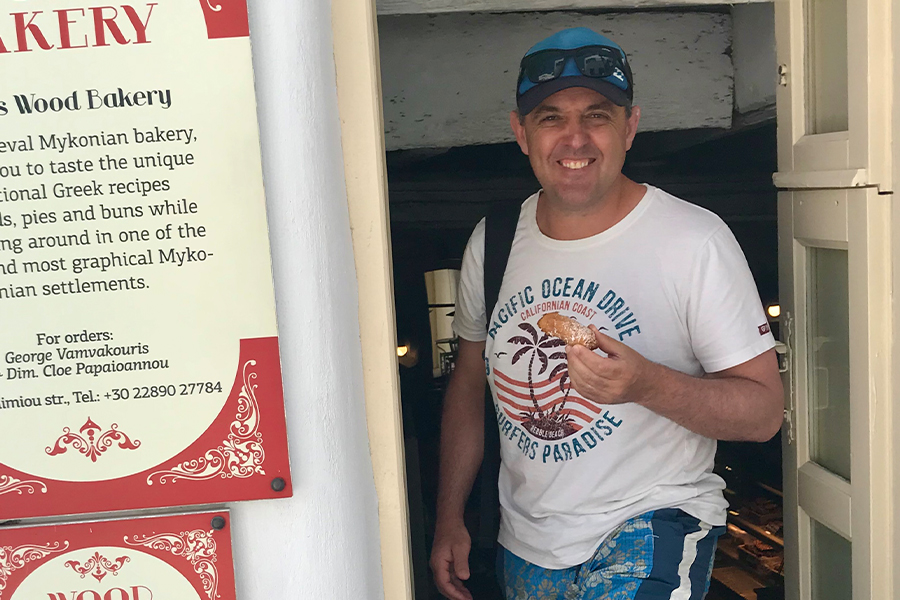 Hubby volunteers to do some quality control

Stepping out onto the sun dipped streets once more, I felt sure that Cloe and George’s recipe of traditionally baked bread and simple hospitality would continue to provide lost travellers with a sense of direction for generations to come. Because a simple welcome is sometimes all it takes to help us find our bearings again, no matter where we are.

Note from the author: You can find Giora’s Wood Bakery in Agiou Efthimiou, Mykonos. If you get lost, just ask one of the locals, or let the winds guide you. 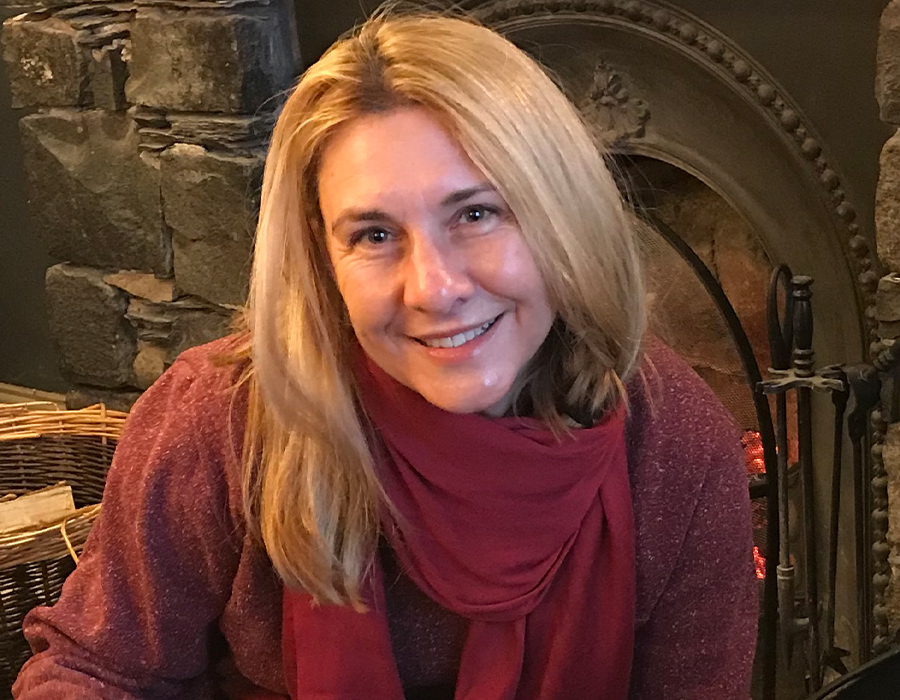 Sue Webb is a high school teacher who lives with her family on the Sunshine Coast. Having sold their family home, they were just weeks into a gap year through Europe when Covid-19 struck. Faced with the choice of abandoning their dream and going home or locking down in Europe with the hope of eventually continuing their travels, the family decided to stay put. As European borders tentatively reopen, travelling in a Covid world has highlighted the need for good old-fashioned hospitality, and how a simple welcome can help us find our bearings no matter where we are. You can follow their travels @webbtrek2020.