Menu
Home | Culture | Socrates: The Right Man for Our Age?

Socrates: The Right Man for Our Age? 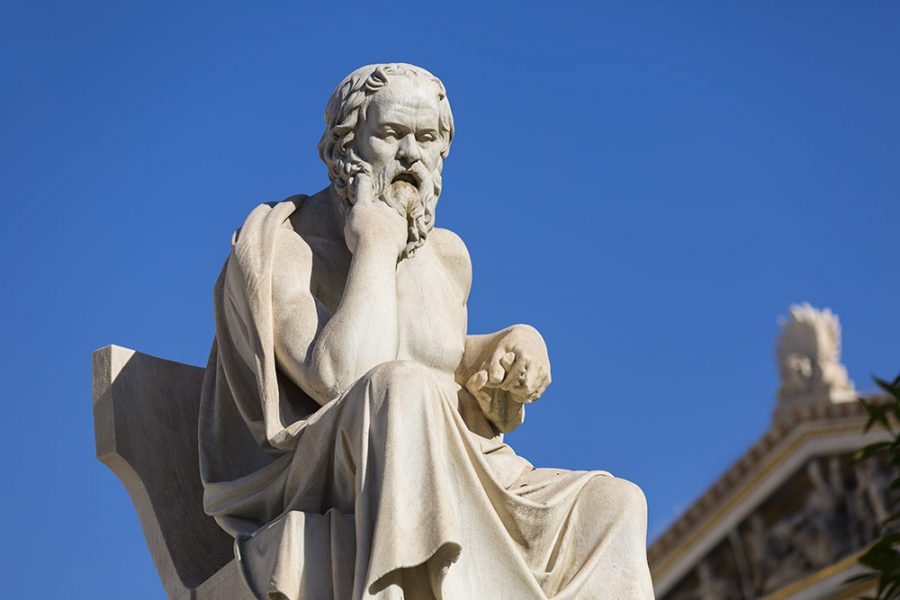 What is Socrates now?

Take a seat in the court of ancient Athens as Socrates goes on trial for his life in history’s most famous defence. Hear the philosopher face his accusers with his trademark wit, cutting logic, and the courage of his ideals. Consider his arguments on virtue, justice, politics, corruption, civic duty, love of life and hope in death, and draw your own judgment. Enjoy the post-performance opportunity to discuss the ramifications of your verdict, led by acclaimed actor Yannis Simonides.

Socrates Now is an 80-minute solo performance (in English with Greek subtitles) that captures the essence of Socratic ethics in an accessible and engaging manner. The international hit theatrical rendition of Plato’s “Apology” returns for the 5th time to the beautiful courtyard of the Athens University Museum, beneath the Acropolis, a few steps from where the philosopher was sentenced to death 2,400 years ago. 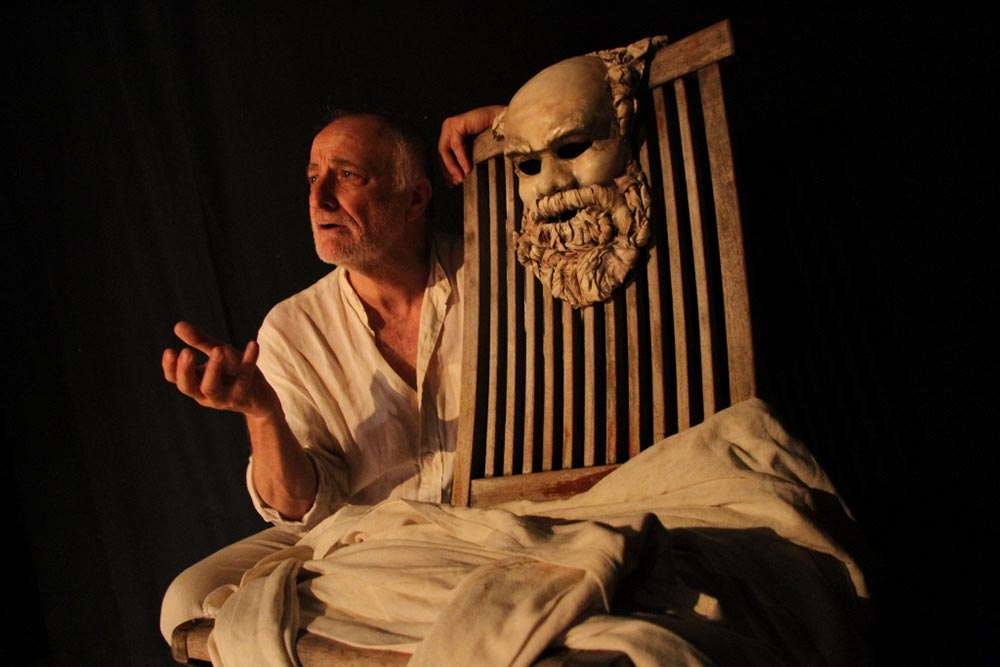 You’ve performed Socrates Now to over 200,000 people in 20 countries. Can you explain its enduring magic?

Socrates Now is not just a performance. It’s an interactive experience where I engage the audience in a conversation and we examine some of the most basic premises in our lives.

Plato’s text really is as fundamental as the Bible and the Koran. So, we take that, and together we talk about how to address the ethical crisis that besets us today.

But more than anything, audiences have fun! It’s an evening of mirth and humour. Socrates didn’t take himself that seriously. He said, “I don’t know anything. And if you think you do know everything, then you’re full of it.” So there’s a lot of laughter and crying and reflecting. It’s not all serious philosophical diatribe, I’ll tell you that!

Socrates. Do they still make them like that these days?

Every era, every place, has its own Socrates. They’ve been around for 2,500 years. People who are willing to put their lives on the line for what they believe. Socrates happened to have the best PR, par excellence, in Plato who chose to make his mentor his mouthpiece. But the fact is that Socrates is a literary creation as much as a historical person. In reality, he was a figure somewhat disaffected by the life of his city. He fought war campaigns where he killed his fellow human beings. We conveniently forget that. And the fact that he and Plato and all those other good people managed to exercise critical thinking and freedom of thought on the shoulders of 150,000 slaves who died for it.

So who might those Modern Day Socrates walking amongst us be?

Let’s not forget that Socrates was not liked by everybody. He had as many enemies as he had friends. Half of Athens hated him and they killed him for it. They said: “You are no good, you are undermining the very essence of this state.” Of course as soon as they killed him, they regretted it. But who likes a man who self characterizes as, “I am a horse fly on the behinds of my fellow citizens!”  Whether you like them or not, you can take an Edward Snowdon, (who leaked classified American National Security Agency documents), or a Julian Assange, or a Dalai Lama, and compare them to Socrates. Now you might consider them opportunistic or liars, but the fact is that they are endangering their lives. Look at the people behind the Panama Papers, who get death threats every day. These are people who have the guts to say, “I cannot live in such a hypocritical world.”

What do you think Socrates would have made of Donald Trump?

The wonderful thing about Socrates is that he never criticizes or attacks anyone directly – he constructively, kindly, lovingly questions human behavior.

Socrates was surrounded by demagogues like Trump. He was killed by Trumps. And they did exactly what Trump does: by taking a situation and turning it upside down to present it in all the darkest colours, instead of its most beautiful colours. Propaganda at its best. Socrates would not have criticized Trump because Trump is merely the tip of the iceberg. He is a symptom of larger malaise. So Socrates would have addressed himself to the malaise instead.

You’ve been performing Socrates Now for over a decade. Have the Great Man’s philosophies and principles altered you personally?

Absolutely. There’s no way something like this can’t influence someone like me who has always been both a Teacher and a Seeker. Socrates always felt that we have goodness inside us. That we are intrinsically pure and good. The only reason we act badly is because we don’t know what’s inside us, and once we start examining it and having nice conversations with ourselves – and listening rather than talking – to that little voice that we all suppress, then we might be able to get to some place that resonates for all of us. So that’s what Socrates has done for me. Perhaps he hasn’t made me a better person. But he’s made me a better student. And he has also harmonized me with my mortality.

So it was learning, not teaching, that really inspired Socrates?

I don’t think Socrates ran around from morning until midnight, barefoot and smelly because he forgot to wash, wearing the same clothes winter through summer, because he was obsessed about teaching. No, you do it because you want to learn. You want to experience life first.

How might Greece in 2016 benefit from the wisdom of Ancient Greece?

There are so many ways. But unfortunately, we are in such despair, that all we can think of is survival and keeping our heads above water. What we really need to do is re-think Greece from ground zero. Get rid of political systems and clientelism and start from scratch. If there is a hope, and this again ties back to Socrates, it is to be found in the idea of Absolute Justice. To him, Justice was something to be found even above the Gods. And if we started with changing the judiciary system in Greece in 2016, we might be able to change everything. Justice here is broken. There are some very good prosecutors who put themselves on the line against moneyed interest, but it is not enough. In the states, you can take Obama to court, and not have to wait for five or ten years for justice.

What other Socratic principles are still relevant today?

Socrates was talking about our freedom to explore things. He never insulted the Gods, but he did say: “Let’s talk about it. Is there one? Or are there many? What’s this voice inside me? What is it telling me? Is it a God?”

Also, Socrates had a great sense of humour; he was very self-deprecating. Greeks are very passionate, as you know. We have great imagination. But, we don’t know how to laugh at ourselves. It’s not in our DNA.

Is Socrates’ fate up for grabs in your production? Or is he always doomed?

It is the viability of his death sentence that is discussed in the second half. Let’s look at the aspects that did make him undesirable and hated. Together, we arrive at an understanding of how people like Socrates, for better or worse, are invariably put to the knife.

You once described yourself as a wandering minstrel. But where do you ultimately think of as home?

This place where I am sitting right now in my “poor man’s castle” in Psyrri, with my plants, is home. I look at the Sacred Rock from my apartment and I feel like a God. Even though my kids are in San Francisco and my grandchildren are in Pittsburgh and my partner in life is on her way back to New York, my Everything is here in Greece. I am comfortable everywhere else that I go. But it’s here that I am closest to an honesty that I don’t find anywhere else.

You’ve lived in the States for 51 years now. How is “New Yorker Yannis” different from “Athens Yannis”?

I just had an English friend stay with me for a few days and she said, “Oh my God, you are different here!” It’s a certain comfort, a certain letting my hair down. I grew up here. I came from Istanbul at 8 and left when I was 19. Greece is the place that made me whatever person I am today. For all that I have been surrounded by American culture and politics, I am hopelessly Greek.

Which pockets of Athens and Greece inspire you the most?

I don’t think there’s any place in Greece that doesn’t fill me with emotion. Greece makes me cry. It’s so beautiful, so extraordinary. It’s no accident that those wonderful gods of the old religion were created here! I was walking down the ancient paths of Hydra a few days ago and I encountered a dirt road with a gnarled olive tree standing in the middle of it and I could have wept because there was so much just in that.

Do you have hope for Greece’s immediate future?

Absolutely. Well if I didn’t, I wouldn’t be continuing to do what I’m doing, because it certainly doesn’t make me rich; it makes me poorer! But mine is not a normal optimism. It is the optimism one feels when one loves something so fully, that one has no choice.

There is so much Greek talent outside of Greece with the diaspora now. An extraordinary treasure of contemporary poets, filmmakers, businessmen, philosophers, artists and other modern voices. It’s a crime that there is such a huge divide between the diaspora and the people here. Because single-handedly, the diaspora could probably save Greece. 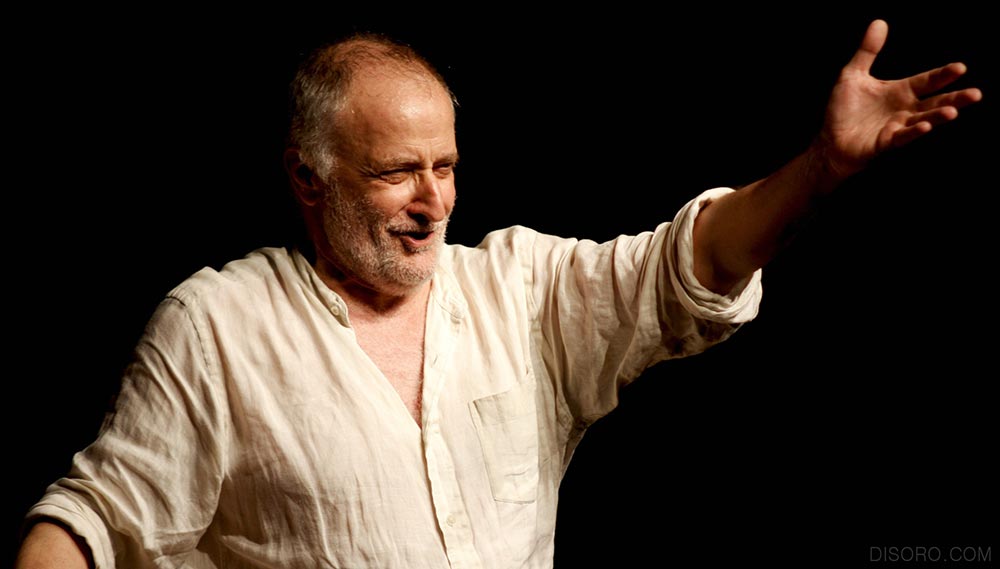 Yannis Simonides appears in Socrates Now,  June 25-July 24 24 (Wednesdays to Sundays), at 21:00 at the University of Athens Museum, 5 Tholou Street, Plaka.  Εntrance fee is €15 for adults, €10 for students & Groups (over 5).  Visit www.ellinikotheatro.org for booking details.