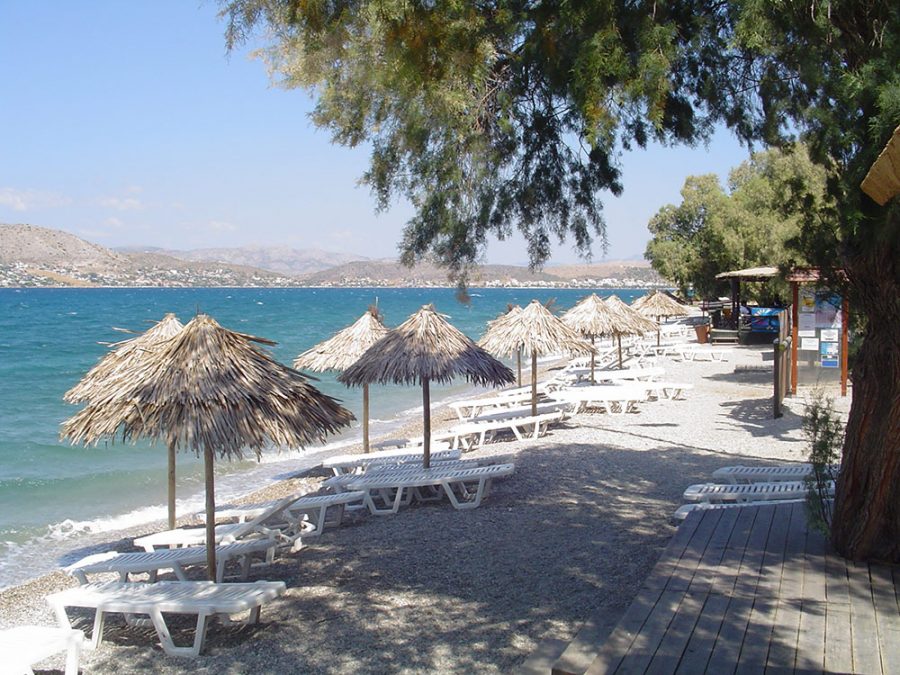 John Carr goes into bat for Salamina, that much-maligned, silent achiever of the Saronic, shaped just like a “stranded octopus”.

“So, did you go anywhere interesting over the weekend?”

(A shocked silence.)  “Please tell me you are joking.”

That’s the kind of reaction you may well expect after you admit to visiting the one Greek island that never claimed to be a tourist magnet and seems to be quite happy not being one.  You won’t find Salamina in your hotel and resort lists.  As far as the vacationing world is concerned, it doesn’t exist.

Ask any Greek what he or she thinks of Salamina and you might well get a wrinkled nose in reply.  That rag of an island, with refineries at one end and a sewage processing plant at the other?  Therefore, intrigued by Salamina’s total absence from the tourism discourse (why does nobody go there?), I checked it out.  So here’s what you can suggest to those sun-thirsty relatives or friends who’ve just popped in from Birmingham or Berlin or Boston, and barely having yanked their luggage off the airport carousel, ask breathlessly:  “Hey, is there a nearby island where we can spend a day, you know, go in the morning and come back in the evening?” 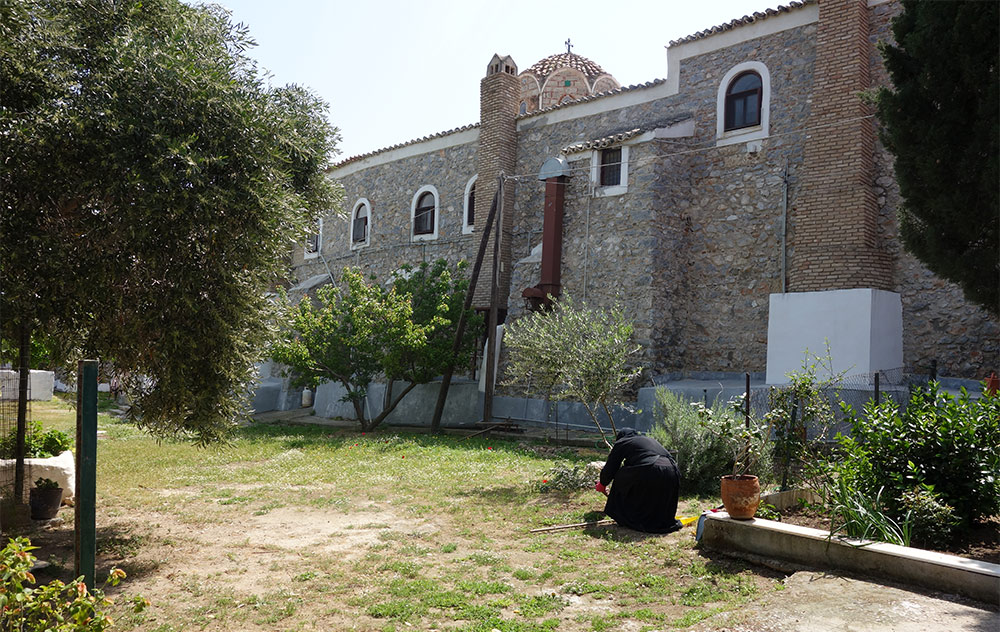 Wallowing in the subtle sense of superiority of someone who actually lives within shouting distance of a Greek island, we might suggest Aigina, less than an hour away by fast hydrofoil, or more distant Poros.  But, we’re happy to announce, there’s a cheaper, nearer and quicker alternative.

The sole guidebook I could find that makes even a passing mention of Salamina describes it as “the best-known island among those who have never visited Greece, the least-known among those who have.”  That dwindling class of people who are familiar with Greek history know Salamina as the island of Salamis, where in 480 BC Themistocles and the Greek fleet pounded Xerxes’ Persian ships into toothpicks while Xerxes himself raged ineffectually from his elevated observation post.  But that’s about the only good press the island has ever had.  In the following centuries its name became Koulouri, to be renamed Salamis/ina in the nineteenth century by a government eager to re-establish Greece’s ancient pedigree.  However, according to the same guidebook, the island “frankly does not live up to so glorious a name.” 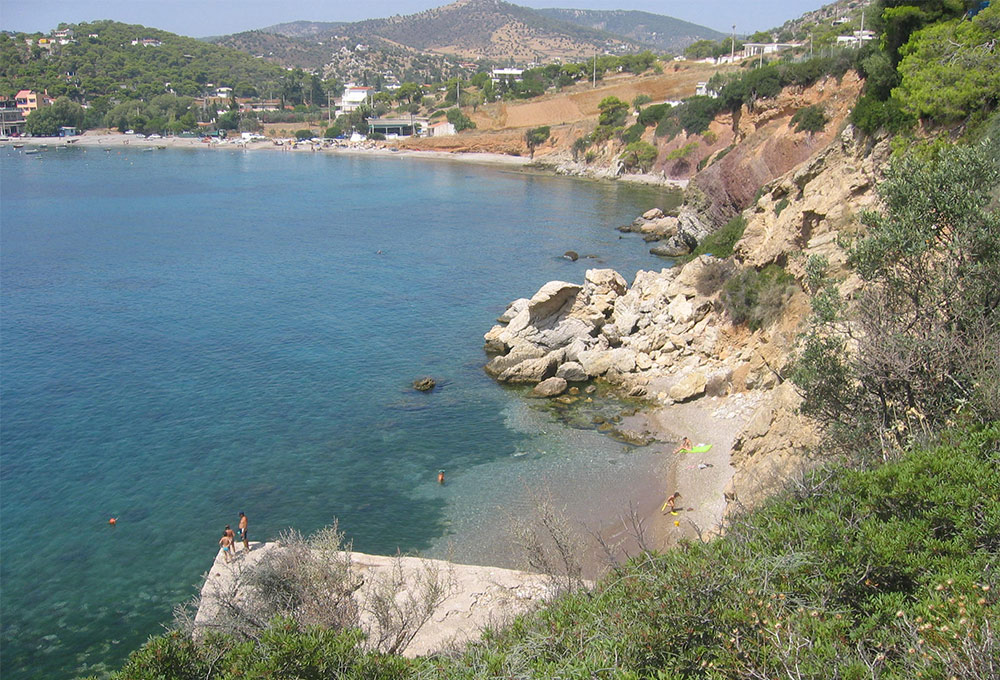 A thirty-minute drive down the Attiki and Corinth highways (fifteen minutes if you’re a Greek driver), brings you to the Megara turn-off.  From there a bumpy asphalt ribbon leads to the ferry terminal.  The voyage lasts all of five minutes – is this the shortest such crossing in the world?  You barely have time to switch off your engine before you’re clanking off again.  After a seven-minute drive through a coastal pine wood, you’re at the main town nestling in one of the deep inlets facing south.  What strikes the visitor at once is the small snow-white church perched on a startling bastion of ochre rock soaring abruptly a few streets back from the waterfront.

Only then do you realize that this is a genuine Greek island and not the oily and grimy offshore rustbelt you had been warned about.

There are waterfront cafes and tavernas, including a pasta place that serves helpings three times the usual size – perhaps a reminder of the days when Aias, a beefy Trojan War hero, was strutting about the island.  Across the bay the pine-clad hills are dotted with holiday homes, many of them well-kept and prosperous-looking.  The locals seem well-dressed enough.

A look at the map reveals Salamina to have the splayed shape of a stranded octopus, with promontories and inlets all over the place.  Pre-lunch, it’s a good idea to drive south through the wooded heights dominating the southern peninsula to the beach at Kanakia.  A fine fish lunch can be had here, or at the more accessible Selinia, reachable from the main port of Piraeus by small passenger boat and offering a view of the Athens coast.

The historically-minded can sit here and imagine what it must have been like in 480 BC, when the smoke from burning Athens filled the horizon and the panicked inhabitants were fleeing in boats to Salamis before the marauding Persians.  Plutarch tells a heart-rending tale of a dog belonging to Pericles’ father Xanthippos, who was one of the refugees.  Xanthippos’ dog, howling in grief and unable to bear being parted from him, jumped into the sea and swam alongside the ship.  It eventually staggered ashore at Salamis, where it promptly collapsed and died.  The dog was buried at a spot called Kynossema (meaning Tomb of the Dog), and honoured for centuries afterwards.  The tomb must still be around there somewhere.

On the way back to the port you can drive past crumbling elegant mansions in their cocoon of overgrown gardens, derelict survivors of a genteel past among the prevailing nondescript concrete.  The waterfront Vegera cafe, kitschily over- decorated as is usual in Greek country towns, is a favourite spot for Sunday-afternoon families and Saturday-evening teenagers, with tables right at the water’s edge.  A haunting place for an evening meal is Aiantio (named after the nearby ruins of Aias’ palace), seven kilometres south of the main town, where the sunset paints the bay a russet gold. 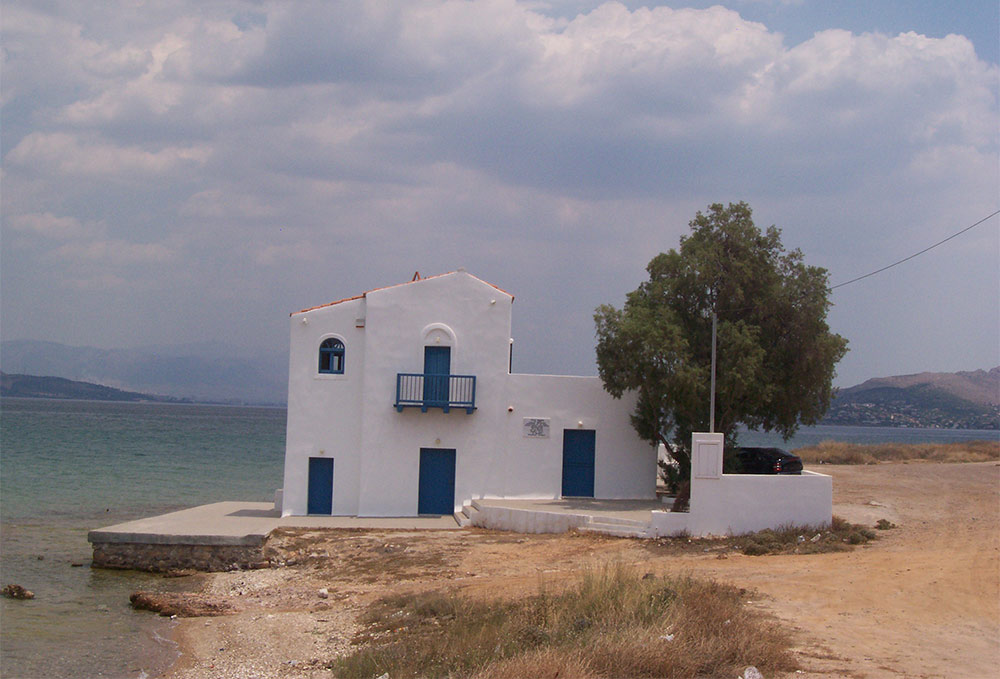 I’ve left until last the one must-see on Salamina, and that’s the Convent of Our Lady Phaneromeni.  It’s on the right of the road just a few minutes after you drive off the ferry.  If you ask politely, the abbess can usher you into the jewel of this particular crown, the 11th century katholikon, or convent church.  The walls and ceiling are crammed with more than 3,000 hand-painted figures from Scripture in a mind-blowing visual explosion (sorry, no photographs).  As you leave, the abbess points out of the door.  “Don’t forget, the world out there is false,” she says, and gestures to the ceiling:  “The true world is in here.” 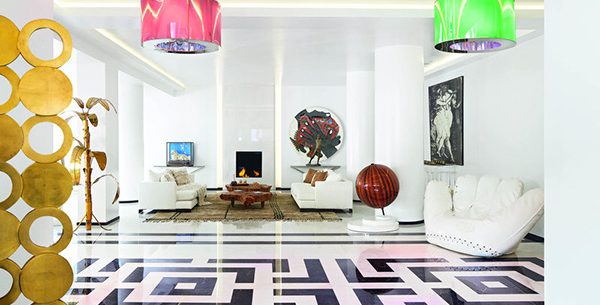 The New Way to Stay in Athens: Boutique Hotels