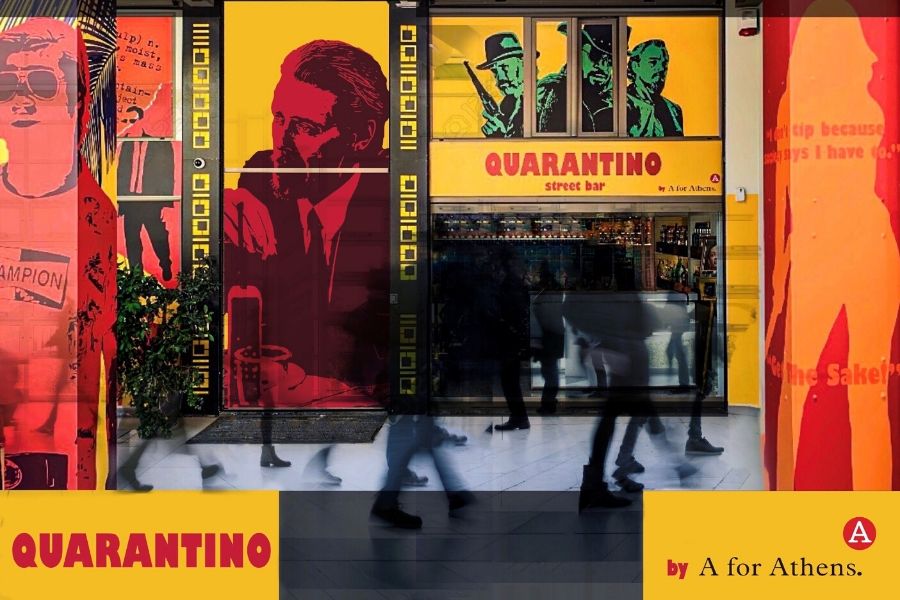 A heady mix of summer cocktails and Tarantino fan talk as A for Athens takes the show streetside, Jack Rabbit Slims-style, inspired by the legendary film maker’s indelible cast of characters at Quarantino. Expect Mr. Pink served with a lemongrass varnish, to generous helpings of Reservoir (Hot)Dogs slathered with coleslaw. And, of course, the playlist is vintage Tarantino. Angela Stamatiadou reviews.

From serving high spirits from their vaunted perch atop the 360 Pop Art Hotel in Monastiraki, A for Athens brings its A-game, several floors below, kerbside, at their pop-up bar, Quarantino. The quarantine and endless hours of binge-watching Tarantino films translated into a new zesty venture – a street bar, open from Fridays through Sundays at Miaoulis 5. Serving cocktails inspired by the cast of characters from Tarantino flicks who have left an indelible stamp on modern pop culture, the drinks here are priced at an extremely affordable € 6. The refreshing “Mr Pink”, with vodka or gin, raspberry, lemongrass, lemon and Perrier brings alive Steve Buscemi’s iconic character in Reservoir Dogs. “Bitch be cool”, with aged rum, tsipouro, citrus sorbet, green tea and mint, transports you to the world of Pulp Fiction.

The script at the new, carefree street bar is expected to change as unexpectedly as a Tarantino plot, so look forward to new cocktails on the menu before the week is out. The playlist here, predictably,  features epic soundtracks from Tarantino movies. If you’re peckish, Reservoir Hot Dogs serves the real deal – with caramelized onions, coleslaw, mustard and ketchup.

As pioneering bartenders, Theodore Pyrillos and his crew have also been pushing for zero-waste cocktails – a root-to-stem approach where absolutely nothing gets wasted. Except for a few of the more enthusiastic patrons, perhaps!

Hervé: Fine dining with a side of attitude