Menu
Home | People | Pomp and circumstance: The real story of an elite Evzone 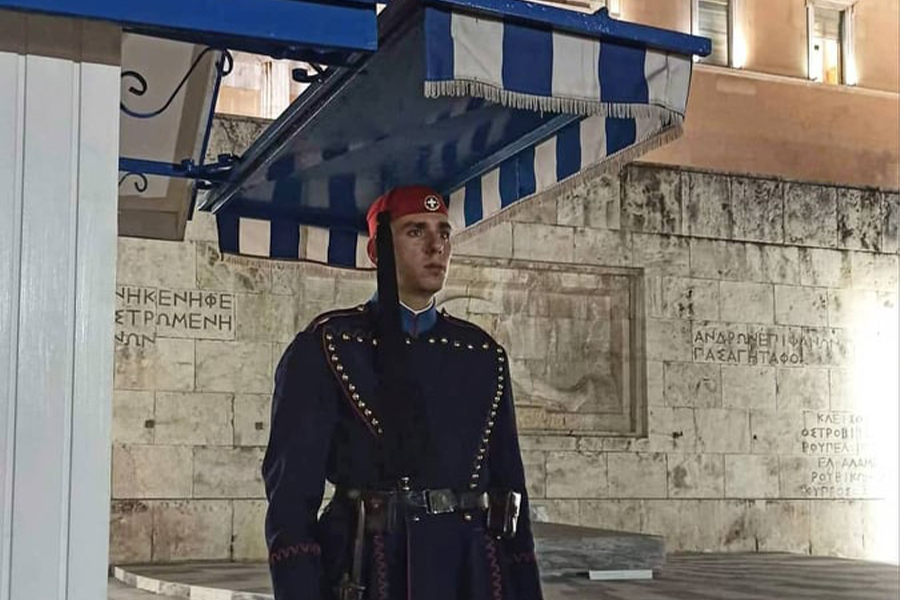 First time at the Acropolis raising the Greek Flag

“We stand still, proud and unflinching. Because at the time we are not human beings. We represent the dead.” Being an evzone is a life-changing honour bestowed only on those with the persistence, discipline and willpower to succeed. Anna Roins speaks to former evzone Sarantis Kouvousis about what it means to walk among the chosen few. 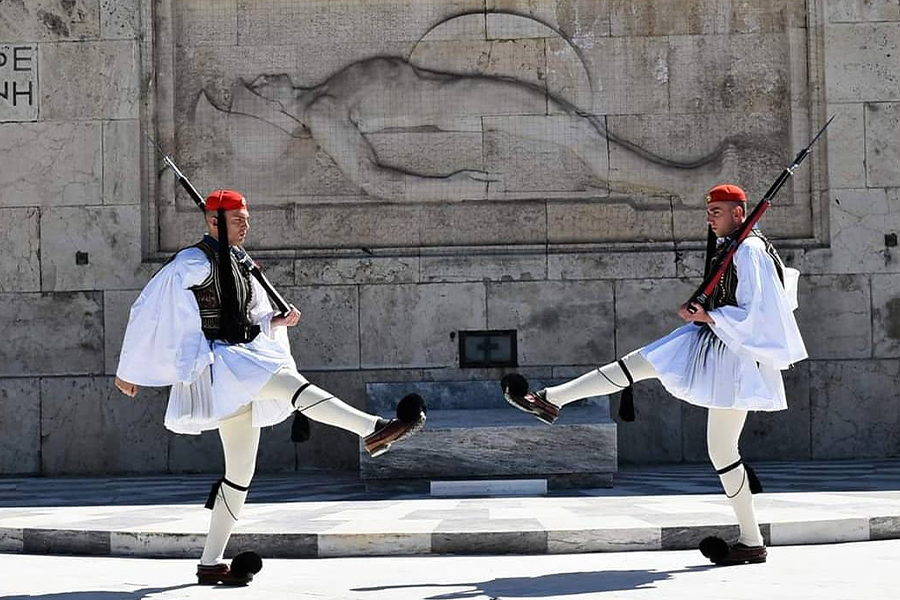 How hard was it for you to become qualified to train as an Evzone?

Becoming an Evzone is a difficult, life-changing process. It’s a mentality shift. We belong to the most elite company a conscript can attempt to join in the Greek Army, since only approximately 200 people become Evzones per year.

What kind of training did you go through?

The training consists of two main components. The first includes physical endurance and technique, which becomes more difficult as the weeks pass. We’re taught basic military commands and bonding through teamwork. After you get paired, you start practising the movements of the service you will have to perform if you qualify as an Evzone. My partner and I were assigned to learn the service for the Tomb of the Unknown Soldier. Others were assigned to the Presidential Mansion, which has a different ritual.

The second – and for me, the most vital component – is the psychological one. Tenacity, discipline and willpower are both characteristics that cannot be taught, but rather revealed. Our training tests our limits on exactly those qualities. 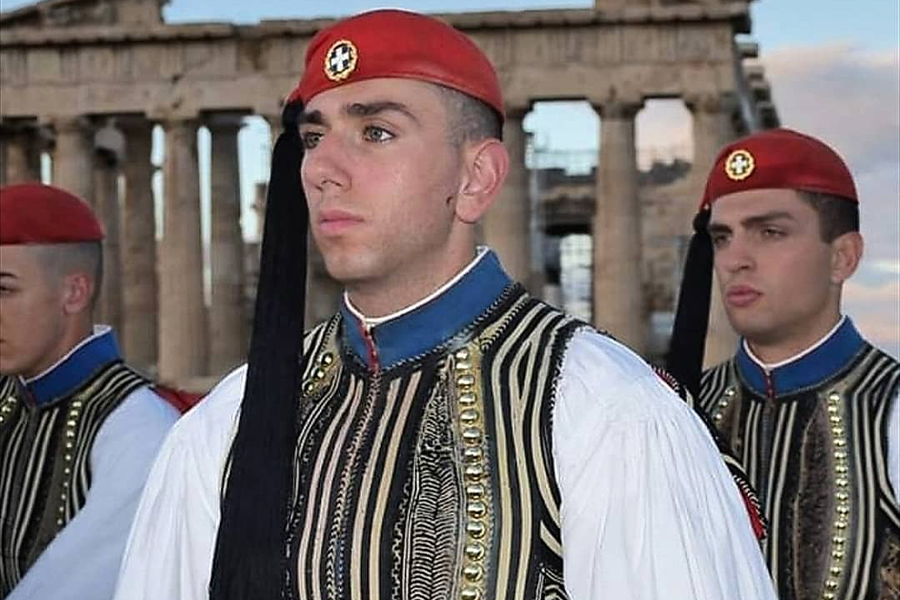 We stand still, proud and unflinching because at the time we are not human beings. We represent the dead. I feel proud. It is a huge honour to join the family of the Presidential Guard and to wear the uniforms that so many Evzones have worn before you and will wear after you. It’s a way to pay tribute to the ones that shed blood and died in battle, for us to be able to have this conversation today. That’s why the garrison cap, ‘fario’, is red. It represents the spilt blood of our ancestors. 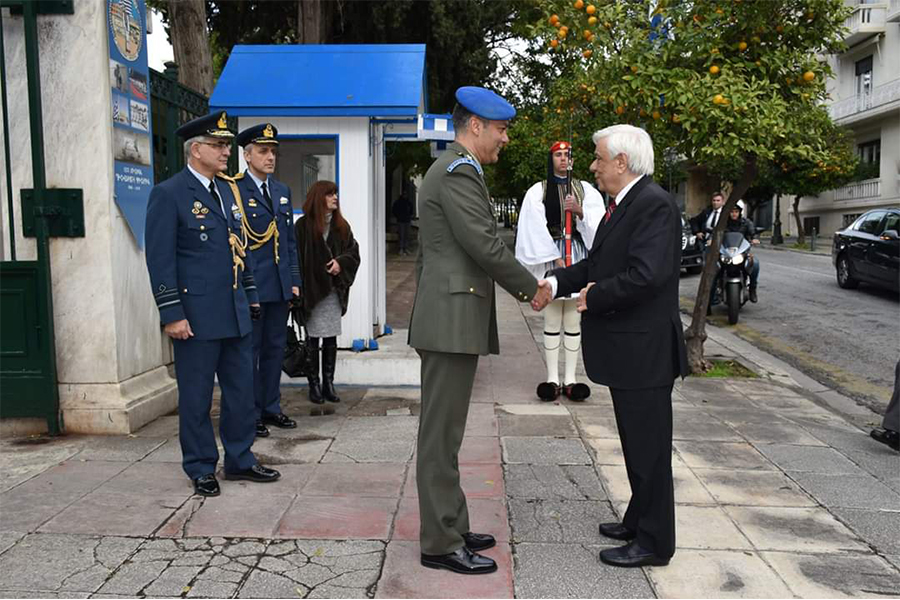 Standing in front of the former Commander of the Presidential Guard, Former President of the Greek Republic, H.E. Prokopis Pavlopoulos and Head of the Greek Armed Forces ©Sarantis Kouvousis

How does it feel being an Exvzone?

I remember once, while we were heading towards the Tomb of the Unknown Soldier, a demonstration blocked the Evzone road, known as the tsarouchodromos.  As they heard our tsarouchia, they opened up, and suddenly, nobody was shouting for the demonstration, but they clapped and cheered for us. But it was not for my partner or me. It was for whom we represented – the brave people who sacrificed their lives for the freedom of Greece.

What was the toughest part of your training?

The toughest part is confronting yourself and your limits, both psychological and physical. Lack of sleep doesn’t help either. 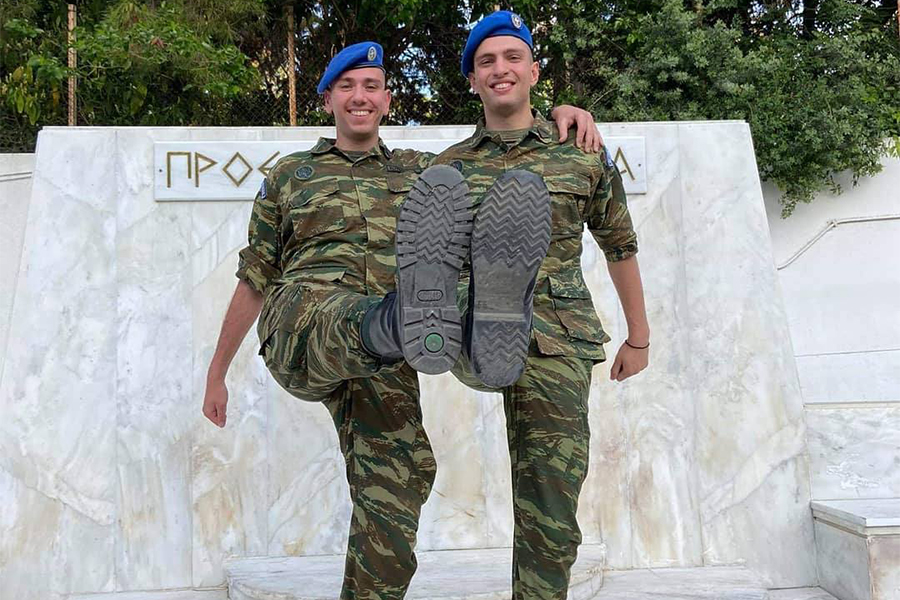 Saying goodbye to my partner, imitating the founta, one of the most distinct phases of the Evzone ritual at the Tomb of the Unknown Soldier ©Sarantis Kouvousis

What was the easiest?

The easiest part was falling asleep. The moment your head makes contact with the pillow, you’re in deep sleep because of the exhaustion. 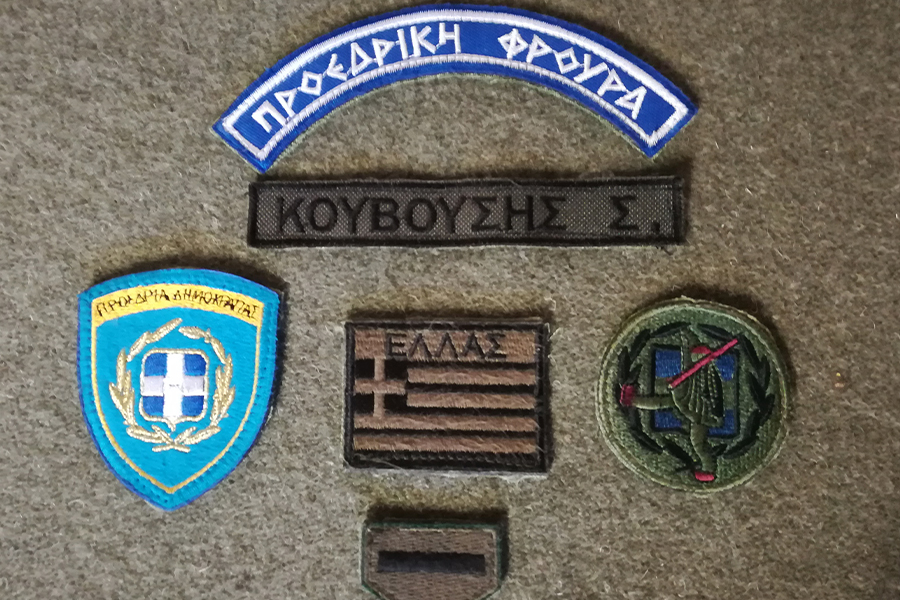 «Patches I wore on my Army uniform. » ©Sarantis Kouvousis

What do you revere the most about the whole experience?

First and foremost: The bonds you create with your fellow Evzones.

Secondly, having the honor to be the official change of the Guard on the ceremony for the first female Greek President on 25 March 2020. In the midst of the pandemic, my partner and I stood still in front of the Tomb of the Unknown Soldier, on the almost empty Syntagma Square due to COVID-19, while the national anthem played and military aircraft were soaring above. I remember thinking how hectic our routines had become. I appreciated the fact that freedom is not guaranteed. I have never felt more honoured to be Greek than in that moment.

Have tourists bothered you?

They often tried to make me laugh or look at them, but to no effect. If they ever became particularly obnoxious, an Evzone wearing a regular army uniform known as the “observer” or paratiritis, would resolve the issue with speed and tact.

Why did you want to be an Evzone?

Watching the Evzones’ eerie stillness and imposing aura always made me look up to them. 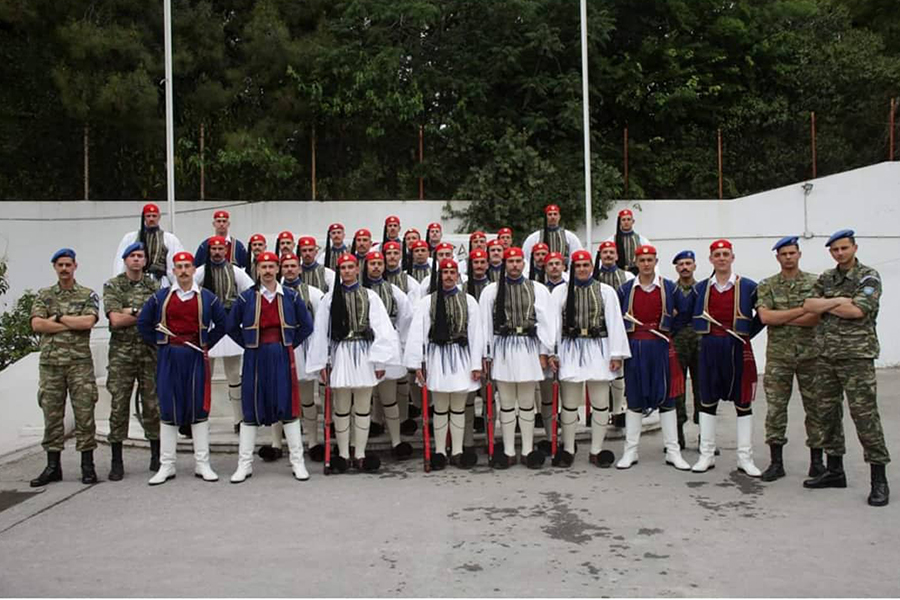 363 Δ’ ΕΣΣΟ 2019. With the batch of Evzones who trained, laughed, cried, endured pain and experienced this together. ©Sarantis Kouvousis

What do you recommend for those wanting to join the Evzones?

If you really think you want to become one, think again. If you thought “nothing can stop me from becoming one, no matter what he says” while reading the above: you are ready to attempt becoming one. Willpower. Vision. Tenacity. Discipline. And remember, “Στα εύκολα να θυμάσαι ότι είσαι άνθρωπος. Στα δύσκολα να θυμάσαι ότι είσαι Εύζωνας”. Which roughly translates to: When times are easy, remember you’re human. When times get tough, remember, you’re an Evzone. 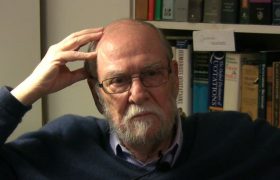 The Fall is Upon Us