Menu
Home | News | On Top of the World

On Top of the World 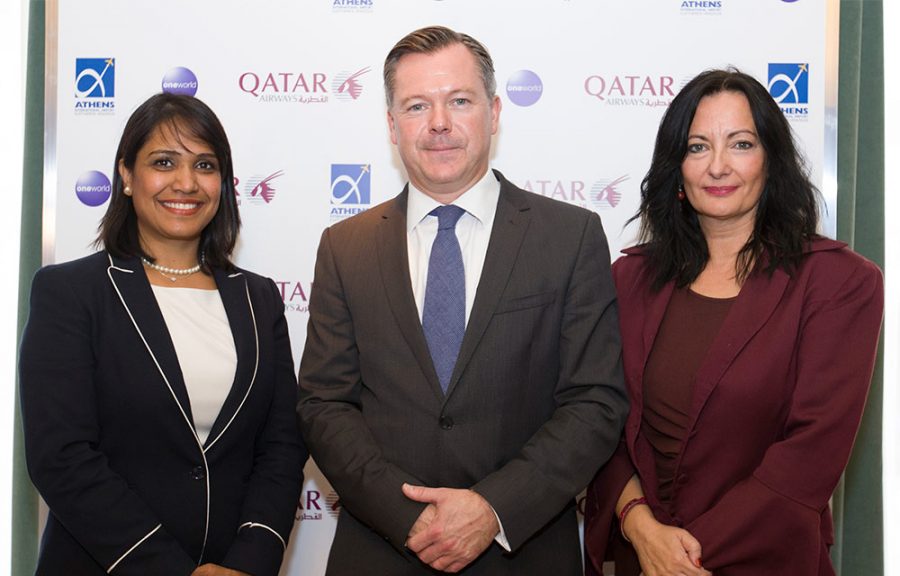 In the international airline carrier business, one minute you’re up; the next you’re down, so to speak.

If it isn’t fluctuating fuel costs or price wars, it’s geopolitics or shifting consumer trends. But in an age where more and more of us want to transect the globe; travelling farther and more frequently than ever before – and in ever more comfort – one airline, Qatar Airways, has achieved an apparently unbreachable strike rate when it comes to staying at the top of the game.

Qatar Airways’ status as “the darling of the high-end passenger” is the envy of its premium peers. At this year’s International Paris Air Show, the Doha-based carrier was once again named the World’s Best Airline (it’s the fourth time since 2011), against a backdrop of 20 percent growth in passenger numbers year-on-year and forecast-busting financial results over recent quarters.

Launched in 1997, Qatar Airways is the world’s fastest growing airline.  Over the past decade, they have more than tripled annual traffic to 32 million passengers and now fly 200 aircraft to more than 150 destinations on all six continents; including Athens, which has become an important and rapidly-growing market.

‘We are the only airline to fly three times daily to Athens,’ says Qatar Airways’ Senior Vice President for Europe, Mr. Jonathan Harding. ‘Greece is of great strategic importance to us.’

It’s an allegiance that Qatar Airways put into practice in 2015 by adding their third daily service, at more or less the exact moment that capital controls arrived.

Meanwhile, in the intense battle to fill seats, the airline has recently debuted a revolutionary new premium business class offering, QSuite, described memorably by Bloomberg as “business class on steroids”. 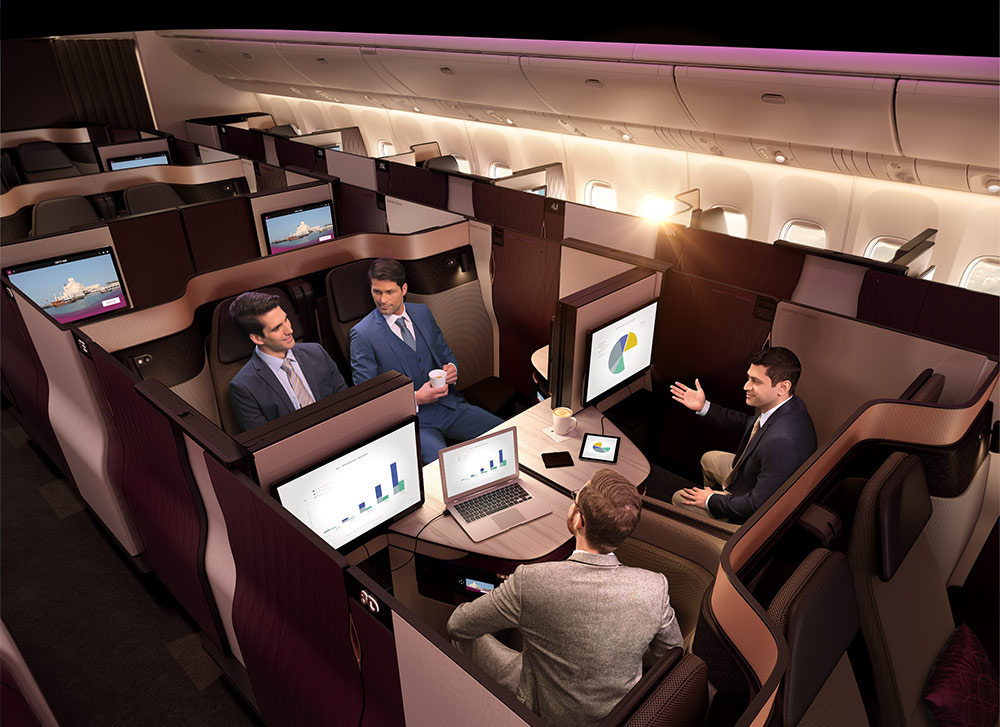 Receiving rave industry reviews, Qsuite is a flexible seating configuration which offers the first double-bed in business class and the option of creating private suites for colleagues, families, individuals or couples. The innovative system has been billed as the future of premium travel and according to Mr. Harding, will soon become commonplace across Qatar’s fleet of 194 Airbus and Boeing jets.

Even so, it’s been a year of mixed fortunes for the prosperous carrier. In early June, Qatar’s neighbours, Saudi Arabia, Bahrain, Egypt and the United Arab Emirates imposed an embargo on trade and transport after accusing the Qatari government of funding terrorism. The ongoing blockade, which was endorsed by American president Donald Trump, has resulted in Qatar Airways having to scrap several of its short-haul flights and re-reroute many intercontinental services throughout the region.

On his recent visit from London, Insider sat down with Mr. Harding for lunch at Zonars to discuss the airline’s current state of play.

Qatar got off the tarmac to near-perfect conditions in 2017: your financial results for the first two-quarters of 2016 exceeded expectations; your passenger numbers soared by 20.1 percent year on year; and Qatar Airways was voted the World’s Best Airline 2017 for the fourth time by ratings group Skytrax.

We’ve been privileged to receive that award on a number of occasions but there is a big responsibility that comes with that; in ensuring that we discharge our responsibility to our customers, whether they are business or leisure travellers, and in delivering high standards. That’s our main focus. We’ve had a very strong year last year and a very strong first half of this year.

But – to continue the metaphor – Qatar then encountered serious unexpected turbulence over the summer due to the blockade and your falling out with American Airlines Group Inc. over your code share agreement to the crucial U.S. market. Can you ever be prepared for such an overnight unravelling of best-laid plans?

The reality of the blockade which started in June is that, yes, it’s affected a small part of our network. But we fly to over 150 destinations. So we’re very keen to emphasise that it’s business as usual for us and that, yes, while we are in this political situation, we will leave the politics to the politicians and the diplomacy to the diplomats and focus on what we passionately believe in – which is delivering exceptional customer service.

As a consequence of the ongoing blockade, are you bracing yourselves for a tough landing when it comes to Qatar’s year-end results?

Look, it’s a challenging industry whoever you are and we need to ensure that we are working very hard with our customers to understand what they want. We’re optimistic. We’ve had some great numbers across the network, including Greece, so we’re very, very positive.

What lessons did you learn at the corporate level as a result of the events of the summer and how did you go about rebuilding consumer confidence – especially with regards to the Greek market which was particularly affected?

We learned to keep focused on the business of running an airline and on our responsibility to do that to the very best of our ability. We restored consumer confidence by constantly working on product innovation – initiatives like Qsuite – and through the expansion of our network. We are the fastest growing airline in the world. We’re launching 26 new destinations.

So coming back to the “business as usual” message, we said we’d launch these destinations on specific dates and we did just that, or even accelerated the process. We launched Nice earlier this year and over the summer, we launched a number of destinations in Eastern Europe. We just added Kiev. Dublin and Cardiff will come next year. We’re just about to launch Sarajevo. It’s not just new routes either; it’s additional frequencies. So this is a hugely exciting period.

What main trends have you observed in consumer travel?

The flight itself is becoming a more and more vital part of the travel experience. There is an ever-increasing desire to travel in comfort and within the leisure market, to explore new destinations.

From a corporate point of view, it’s very much about convenience and time. Corporate customers want to get to where they want to be in comfort, quickly and conveniently, and to be the recipient of a high level of service. That’s what we aspire to. 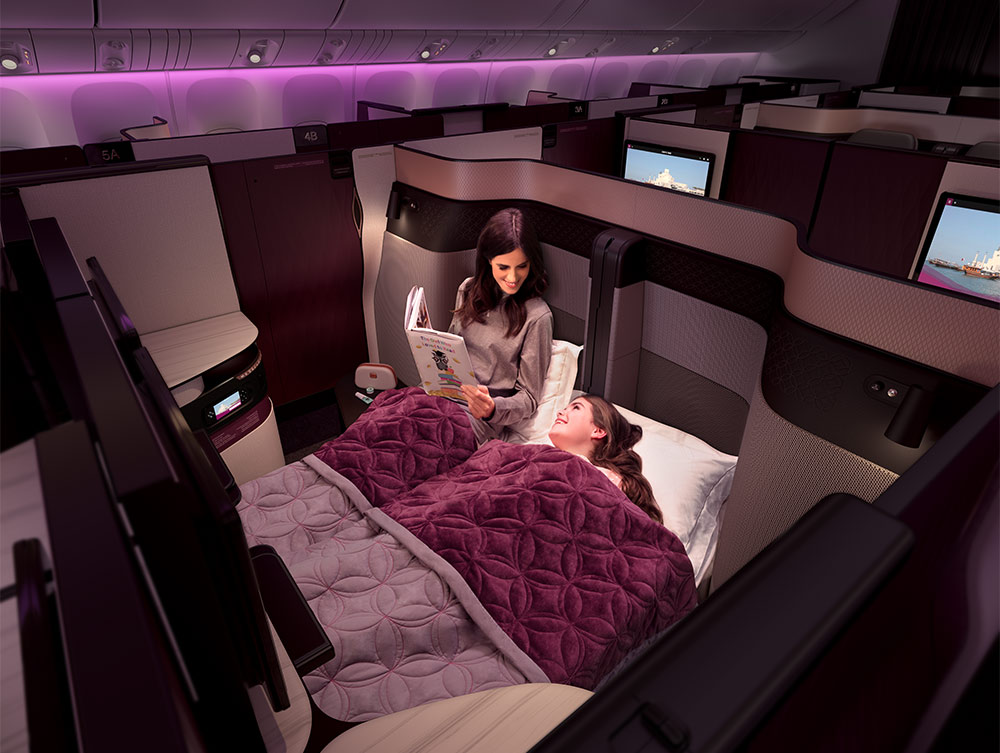 In a hugely-competitive field, Qatar Airways has always placed a high premium on its business class offerings. Your Qsuite design is the envy of other carriers.  Do you worry about copycats and about staying ahead of the game?

There are some strong airlines with strong products but Qsuite is a game changer for the industry and it’s very special. It feels and looks like a first-class product in a business-class environment (in fact, it’s the first double bed in business class). It looks amazing. A big part of its appeal is that it’s very flexible. It can accommodate a family of four or a group of colleagues.

If you’re travelling by yourself, or as a couple, you can close off your section, providing more privacy. We have launched Qsuites for London and Paris and are due to launch for New York very soon. The aim is to roll it out right across our fleet as quickly as we can. Copycats? We’ll see. We’re keen always to innovate with different products and to understand how to meet our passengers’ expectations.

Greece has had a record number of tourists visiting in 2017 with projections of around 30 million tourists expected in 2018. Is Qatar planning any new routes or services to capitalize on Greece’s popularity as a holiday destination? There’s speculation about new routes to Mykonos and Thessaloniki…

Greece is a massive market for us. Within Europe, Greece occupies a hugely important place (alongside the UK, France, Germany and Italy). We introduced our third service to Athens in June of 2015 just when capital controls came in. Other airlines were pulling back, but we decided that it was important to go ahead and show confidence in the market and we were thrilled to see the uptake of that.

Our expansion in Greece has already been substantial and there is speculation about new routes to Mykonos and Thessaloniki. . I don’t have anything concrete to tell you about Mykonos yet. As soon as I know something I’ll certainly share it with you! But I can tell you that from March 2018, there will be four new weekly flights to Thessaloniki, offering Greece-based passengers a new gateway to a wealth of overseas destinations.

Does Athens have the potential to become a strategic European hub for Qatar Airways?

Greece is hugely important to us – both for the business and leisure market, and the long-haul market: people traveling to China or South-East Asia and the inbound route from this region too is in more and more demand. The fact that we’re triple daily to Athens is a huge commitment. Our competitors don’t offer the same volume.

Finally, what kind of traveler are you?

I’ve been lucky enough to live and work in many different parts of the world: Australia, Japan, China. I lived in Athens for two-and-a-half very happy years back in 1999 when I was working for Virgin Atlantic. I absolutely love engaging with different cultures and learning about them. This morning, as I walked around the streets of Athens, experiencing again the very special charm and the climate here, it brought back many very fond memories.

Greece (finally) Fights for its Yoghurt!

This could be the start of Something Big