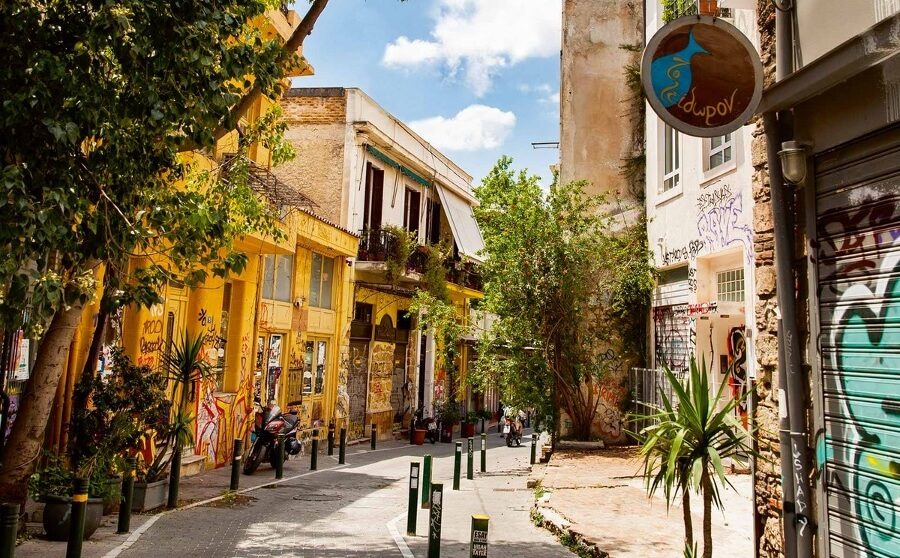 Psyrri Insider Nicholas Pisaris has the ultimate guide on the storied Athens neighborhood and reveals the charms and quirks of this underappreciated area.

I purchased my flat in 2001, and Psyrri has changed a great deal since then.  I likened it to TriBeCa in NY; it had light industrial and some retail by day, but it was a section of Athens where Greeks came to party at night and on weekends.  The only quiet evenings were on Mondays.  At the time Gazi was developing, and many art galleries were moving there as rents had increased in Psyrri.  During the crisis years, Psyrri was dead even on weekends and it became a ghost town. With the great increase of tourists in Greece and the opening of new bars, lounges, restaurants and business in the past couple of years, the neighborhood has undergone a post-crisis renewal.

I would recommend Psyrri over other central neighborhoods for many reasons: cost wise, it is less pricey than Plaka or Kolonaki. It’s also livelier than other central Athens neighborhoods; the community is vibrant and tight-knit, and it’s not uncommon for the nightlife to carry on until the early hours of the next morning. My neighbours are owners of bars, restaurants, and tavernas, and are a friendly lot who are eager to help you in every way possible.

Partly due to its ghost-town past, Psyrri is less touristic than other central Athens neighborhoods such as Plaka and Monastiraki. Despite this, Pysrri is indubitably in the heart of Athens, and its central location has huge benefits. The proximity of the Central Athens meat, fish, vegetable and fruit markets is one, not to mention the weekly flea market that takes place on Ermou Street through the Abyssinian Square to lower Adrianou Street. The proximity of the Abyssinian Square makes buying used or antique furniture in off-the-beaten-path shops and basements an adventure. 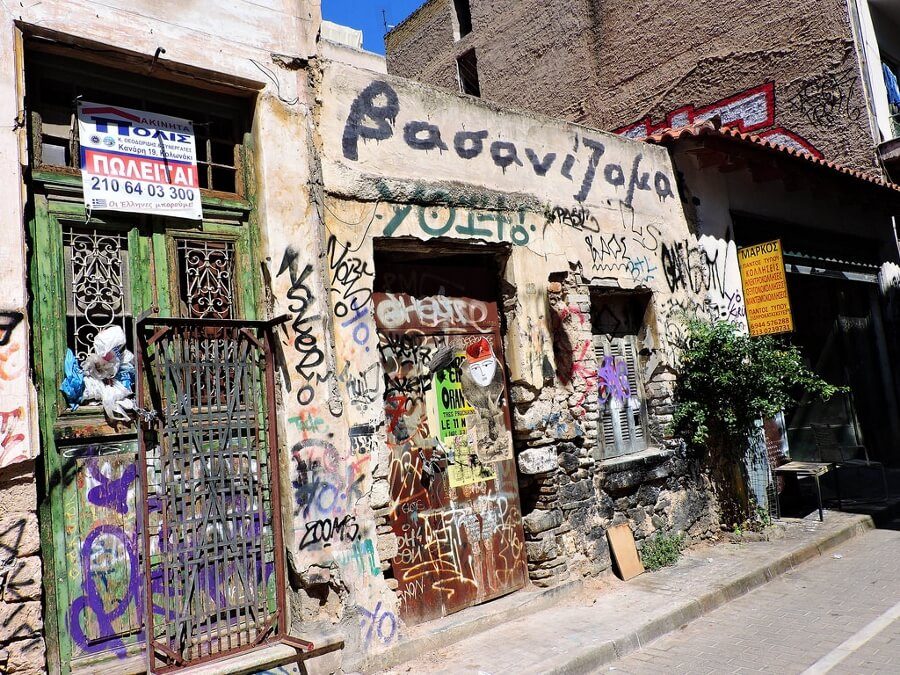 There is a plethora of them in Psyrri. The one I recommend is Cinque Wine Bar which also serves food.  It is owned by Gregory and Evangeline Prassas, whose son, Nikita, a graduate of the American Farm School, is currently studying oenology.  The Prassas family are most knowledgeable about wines and can recommend wines for all palates.  Cinque is considered #1 Wine Bar in Athens by TripAdvisor and is located at Agatharhou 15, in a building on the corner of Agatharhou and Lepeniotou. Reservations are definitely recommended as it is packed; open from 6 p.m. to midnight.

Although there are many in Psyrri and it seems that many have opened on Apostolou Navarhou, my favourites are the following:

Oineas, on Aisopou, a narrow lane between Taki and Kateskaki Streets where the decor includes a bar, brightly lit behind the bottles on its shelves creating a lovely panorama of colors together with vintage advertising posters on its walls.  Dining is both inside and outside with a friendly staff and delicious food.  A unique starter is the cheese pie (tiropita), not wrapped in the tradition phyllo dough, but wrapped in cadaifi dough. Three to an order and large enough to be shared.

Lithos, also on Aisopou on the corner of Navarhou Apostolou and Lepeniotou where dining is primarily outside except during the winter — also terrific food and friendly staff.

I Taverna Tou Psyrri (Tavern of Psyrri) on Aghios Demetrios Street off of Iroon Plateia, a good, old fashioned taverna where the daily specialities are encased behind a glass wall and each dish is explained by the staff.  Dining is both inside and out in a quiet garden accessed by the rear door of the tavern.

Po Boy on the corner of Agatharhou and Lepeniotou Streets with traditional southern cooking, owned by the same owner as Mama Roux in Aghia Irini.

Little Kook’s Café, a most unique establishment on Kateskaki Street near Aisopou Street, it serves wine, teas, ice creams and cakes and is decorated in over the top fashion.  Its Halloween and Christmas decorations are splendiferous and Greek natives plus tourists descend on the area taking photos of the exterior decor. 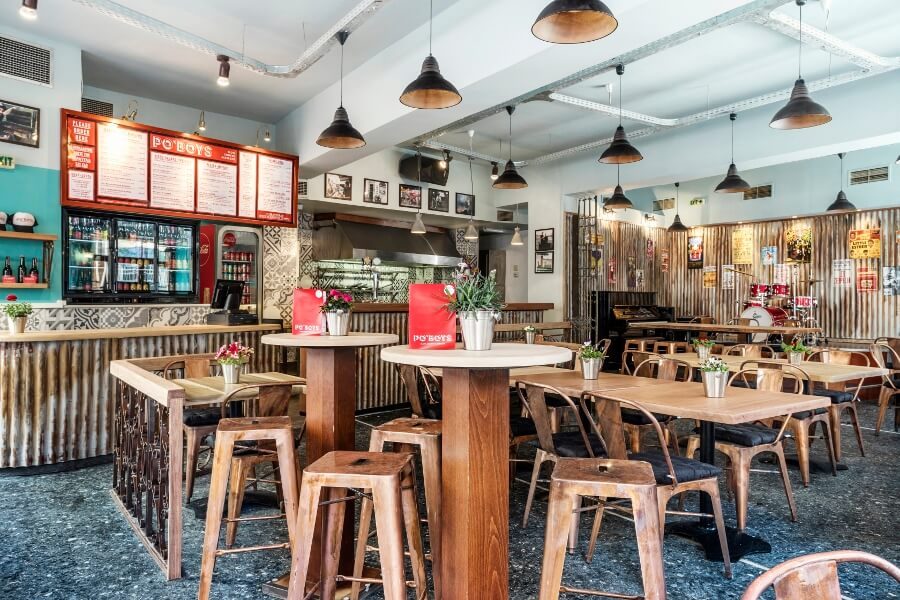 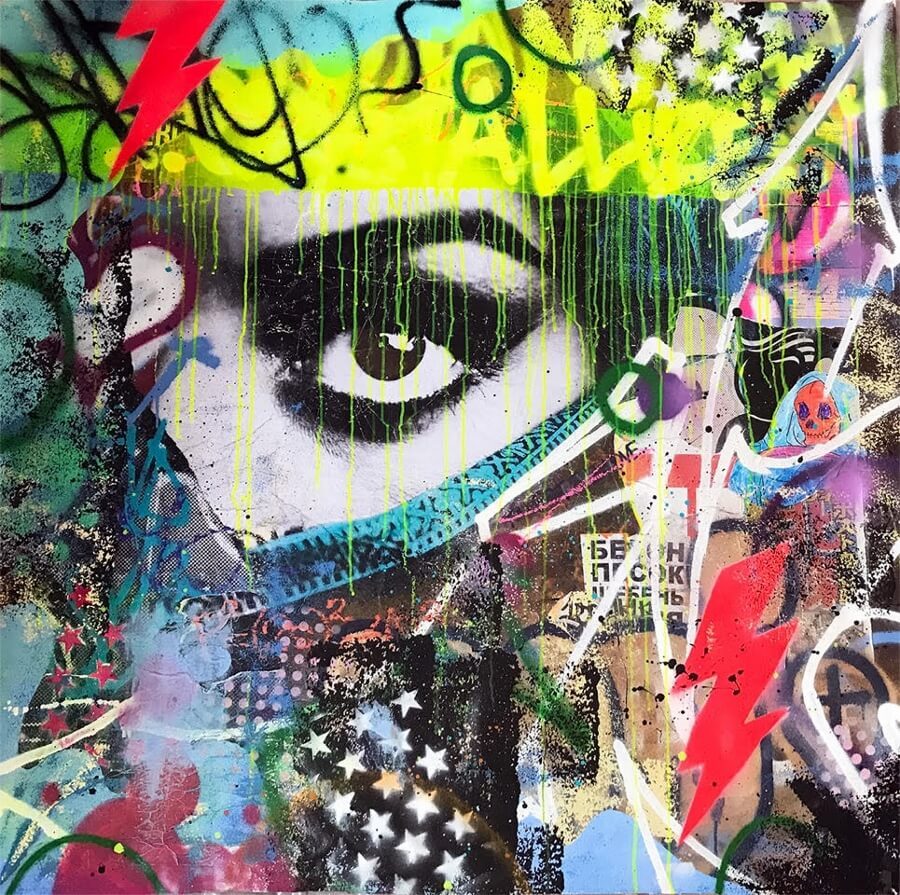 While some may still exist in Psyrri (most moved to Gazi when rents were raised in the early part of this century), the Alibi Gallery on Sari 12 Features street art and emerging artists is well worth a visit.  Tel. No. is 6978 173 554.

The adjectives I would use to best sum up Psyrri’s unique spirit are original, creative, entrepreneurial and definitely different and fun.  I cannot think of living in any other part of Athens and am so glad I ended up here.  In Psyrri, as in many other neighborhoods in Athens, your best security are your neighbors as they know who belongs there and who doesn’t.  You might lose a bit of privacy, but it is a security measure whether you want it or not, and I relish it.

What to do in Athens this December