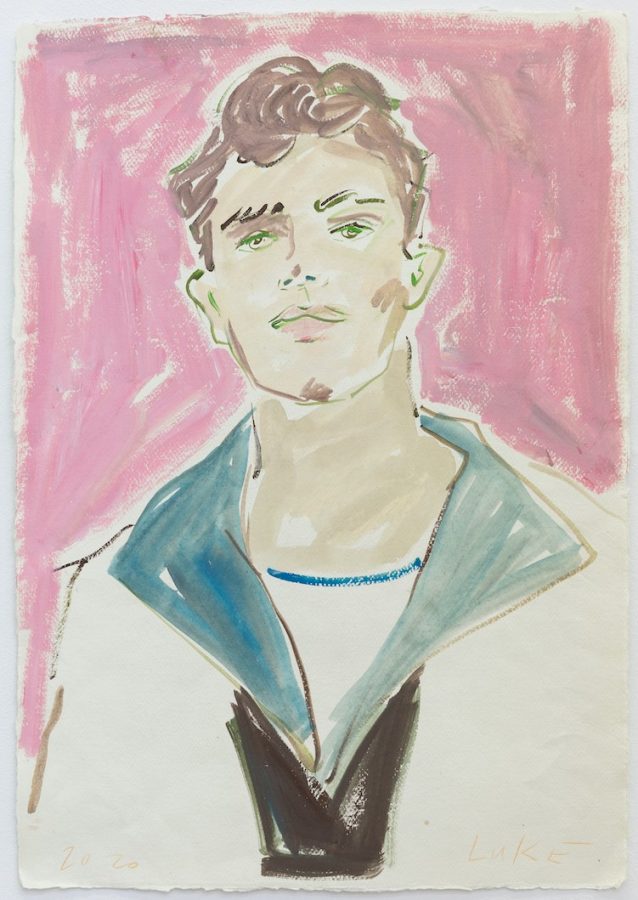 WHAT: Figs and Honey and Sailing. The Breeder presents Luke Edward Hall’s first solo exhibition in Athens with new works on paper alongside paintings and ceramics. The exhibition furthers the artist’s explorations around existing interests which include but are not limited to Greek mythology, art history, interior design, fashion and antiquity.

Much of what Hall attempts to evoke in his drawings is a time and place, one that relates to his experiences but takes on an otherworldly aura in memory. In his new body of work, he is wittingly mixing history and archetypes, populating his canvases with bucolic Grecian scenes as well as English prototypes of the sailor or the fisherman. Positioning his protagonists in a world filled with colour and his distinctive motifs, Hall’s works seem to narrate open-ended short stories which the viewers are invited to interpret in their own way.

The romantic aesthetic of his works is informed by the past and suffused with various references, from the Bloomsbury Group, who very much believed in blurring the boundary between art and design, to Cecil Beaton and a Wes Anderson sense of colour. He regularly draws his friends, acquaintances and imagined characters in a distinctive, fluid style referencing the eccentric lifestyles of the 1920s and ‘30s. Luke Edward Hall is greatly inspired by Jean Cocteau, whose early- and mid-20th-century line drawings conjure the intimacy of romance, while the occupants of some of his more isolated scenes are imbued with the same emotional ambiguities that appear in the work of Patrick Procktor or John Craxton.

“Dancing sailors, somber princes, rustic gods and lovers. Half men-half wild beasts, lonesome shepherds and lords of mythic islands. Fruit sellers, fishermen, soldiers and ancient statues. Dark eyes, pink cheeks. Flowers and olives and urns and waves and wine. Mountain wilds, craggy shorelines, a bar on a square at midnight and an emerald glade glimpsed through swirling vines. A love letter to beauty and a land. A land I wish I knew better, but one that is truly alive in my imagination”.

Luke Edward Hall has worked on a broad range of commissions, from interior design and fashion projects to murals and illustration work for books, restaurants and hotels. He has collaborated with a variety of companies and institutions including Gant, Burberry, Lanvin, Christie’s, Royal Academy of Arts, Richard Ginori, Svenskt Tenn and Habitat. In September 2020 Luke’s first large interior design project opened in Paris: a thirty-three-bedroom hotel and bistro. He has contributed to a wide range of magazines and in March 2019 he joined the Financial Times as a weekly columnist in FT Weekend, answering readers’ questions on aesthetics, interior design and stylish living. September 2019 saw the release of his first book, Greco Disco: The Art & Design of Luke Edward Hall, published by teNeues.