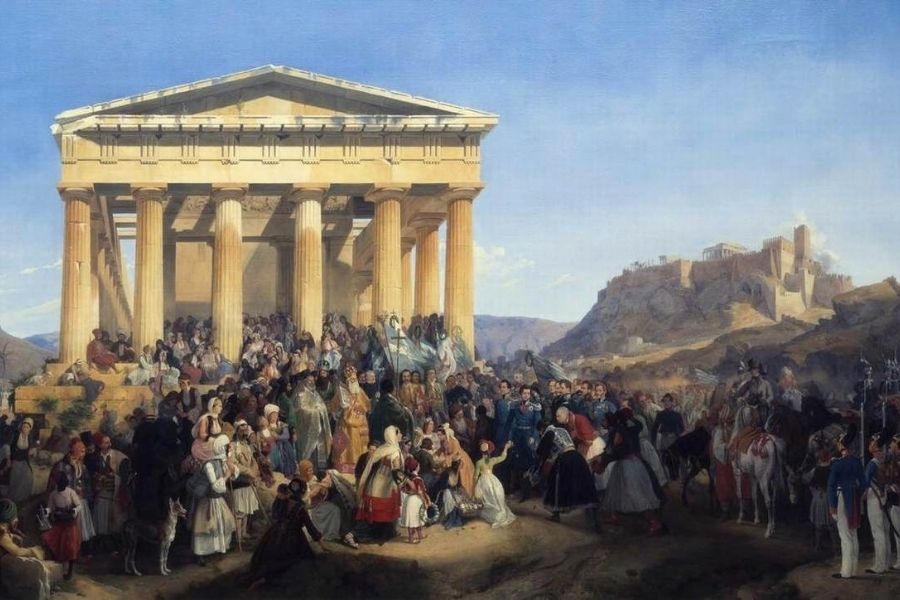 A young 17-year old monarch ascends the throne. An overwhelming majority of Greeks embrace their German sovereign, who dreamy–eyed from ancient Greek glories and heroic acts during the 1821 Revolution against the Ottoman Empire arrived to build a new state. King Otto of the Bavarian royal house of Wittelsbach was at first received with unremitting joy as a saviour to heal and lead the country; he and his Queen returned the affection to their adopted country. But the new kingdom was severely handicapped by the policy interests of Britain, France and Russia. From that initial euphoria to his expulsion in 1862 after a turbulent thirty-year reign, Otto’s legacy was never fully examined.

Greece is Given a King

After eight years of war and losing a naval battle at Navarino, against France, England and Russia, the Ottoman Empire finally conceded the independence of Greece. Shortly after, the great powers granted the country a king on 27 May 1832. Otto Friedrich Ludwig (born 1 June 1815 – 26 July 1867) was a Bavarian prince who ruled as King of Greece from the establishment of the monarchy on 27 May 1832, under the Convention of London, until he was deposed on 23 October 1862. The second son of King Ludwig I of Bavaria, Otto ascended the newly created throne of Greece while still a minor. His government was initially run by a three-man regency council made up of Bavarian court officials. 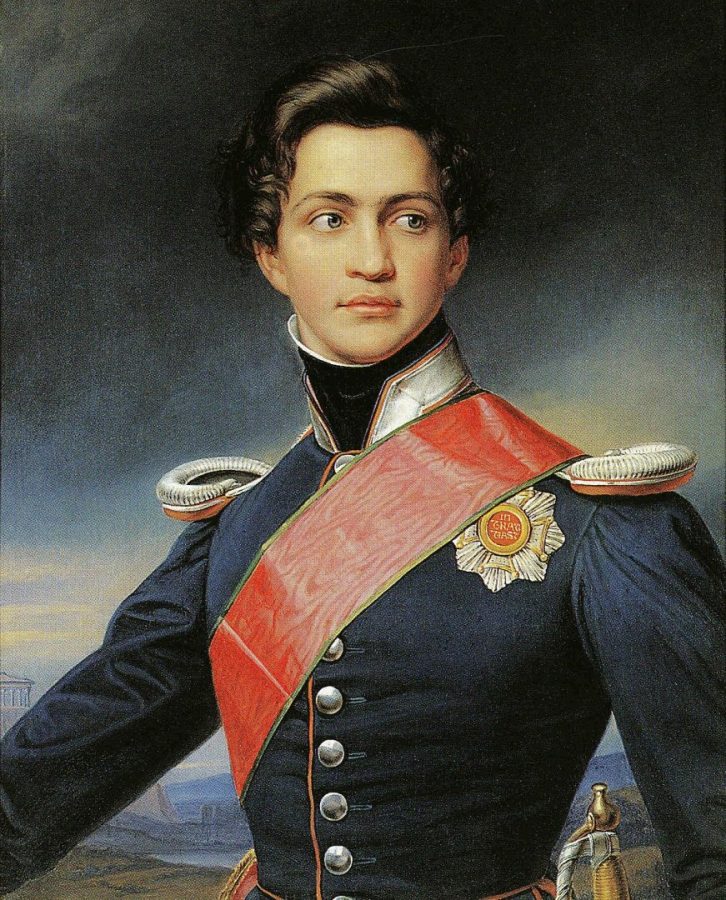 Prinz Octavius of Bavaria, King of Greece, by Joseph Stieler

In ancient times, Attica had legendary rulers, but no one remembers the names of Cecrops or Erichthonios, except maybe the Philhellenes. They worked hard for the heroic cause of the Greeks; raising funds and sending weapons to freedom fighters and took part in the rebel army, like Lord Byron in Messolonghi.

Otto I, just like his father, was a passionate philhellene. (Ludwig had at one time ‘purchased’ Greek slaves after the Chios massacre in 1822 and then provided for the education of their children). Notably, it was King Otto who decided to move the capital of his newly acquired kingdom from Nafplio to Athens. 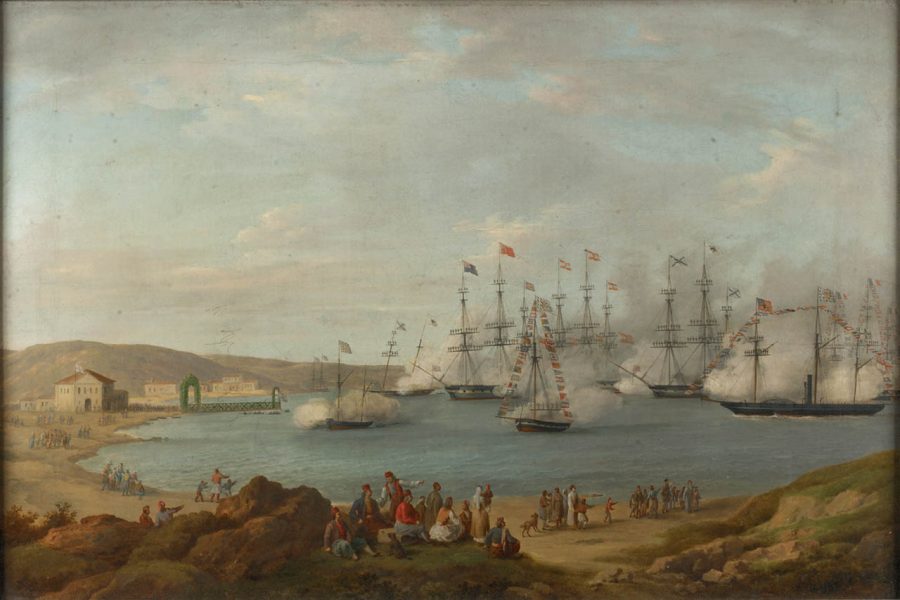 The international squadron carrying Prince Otto of Bavaria to become King of Greece firing a salute off Nafplio, February 1833 by Giovanni Schranz

The young monarch entered the capital at the lead of an unusual convoy that traveled from Piraeus to Athens under the astonished gaze of its inhabitants. Mules were loaded with armchairs; donkeys laden with pedestal tables; horses carried archives and camels held the trunks. Various carriages, a French omnibus and even a borrowed Neapolitan corricolo were following one after the other. They were heading to a rich and freshly built merchant’s residence requisitioned to accommodate the newly appointed King Otto I.

Any structure still standing in Athens, like houses, churches, mosques, hammams, stables, courts, or shops, was to house the royal administration and the court. Bavarian architects were already at work drawing the broad outlines of an urban plan which took into account spaces reserved for archaeological excavations that the young King revered and held dear.

However, at the time, Athens suffered from a lack of accessible water. The pipes and sewers were old and often out of order. The aqueduct had to be restored, and only some of the wells and fountains still functioned. The Athenians could not appreciate how their new sovereign could prioritize the excavation and preservation of archaeological columns or friezes, statues or bas-reliefs. Nor were they convinced that the construction of a palace was an urgent matter. They believed their new monarch and his entourage were placing more emphasis on the glorious past of Greece, then that of their daily living standards in a devastated city. Discontent erupted when the first expropriations come into effect. As such, the Council of Regency (appointed to govern until Otto became absolute), suspended the requisitions and King Ludwig I selected a new architect from Bavaria. Leo von Klenze drew up a new plan for the city of Athens that reduced the surface area of the excavations and designed a new section in the northeast.

A Hard-Working but Hesitant King

Upon reaching his majority, Otto removed the regents when they proved unpopular with the people, and he ruled as an absolute monarch.  In 1835, Otto was declared the absolute monarch of Greece, and while he was assiduous in his work and full of good intentions, he often hesitated to make decisions. Like other Wittelsbachs, he was prone to anxiety attacks and even neurasthenia. There was unrest at his coronation when he refused to convert to orthodoxy. The Holy Synod of Greece did not conceive of consecrating a “schismatic.”

Upon an injunction issued by his father, Otto left Greece so that he could find a suitable bride. He returned in 1837 with his wife, Amélie d’Oldenbourg. The couple eventually settled in the royal palace with its sizeable neoclassical style. By this time, the city of Athens had a theatre, inns, restaurants, an archaeological society, and circular bandstands that played waltzes for onlookers. More importantly, the aqueduct was working as the pipes had been repaired. 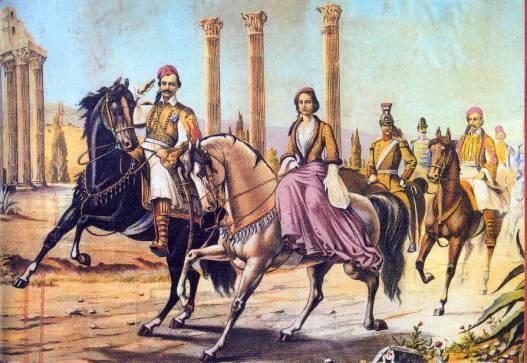 Nevertheless, the Athenians still whispered in discontent. They felt even less support for their King with the decree that German should be the second official language of the kingdom. Eventually, his subjects’ demands for a Constitution proved overwhelming, and in the face of an armed (but bloodless) insurrection, Otto granted a constitution in 1843.

The first revolt broke out in 1843 and Otto was faced with an undeniable fact: Greece wanted to become a constitutional monarchy. At first, the King hesitated to accept the restriction of his prerogatives, but then bowed to the will of his people. From then on, he wore a ‘fustanella’, the traditional pleated skirt-like garment, although this gesture did nothing to ingratiate the respect of the Athenians.

Further, Otto and Amélie had no children, which was also taken by their subjects to mean the monarchy had no future.

Otto was treading a thin line as he was exercising both a constitutional and a political role, not only being the head of the state but also actively involved in government while unwilling to share power with groups strong enough to challenge him.

Being childless and of a minority religious denomination, he also confronted a severe successor’s dilemma that he never resolved. At the same time monarchy in Greece lacked two essential elements that were pivotal for its endurance in contemporary European kingdoms: It lacked both a pre–existing popular tradition that would have made it acceptable to the nation and a local aristocratic class with strong links to the royal family.

The institution of monarchy was new and had not had enough time to form the sentimental bond between the king and the people that advocates of monarchy consider as vital for the legitimacy of the dynasty. 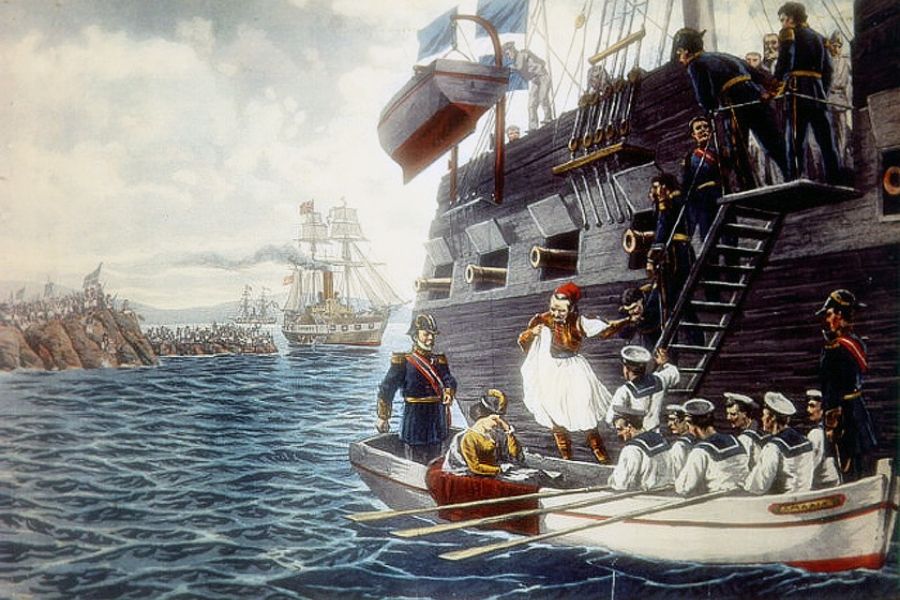 The expulsion of Otto in 1862, unknown author

On 23 October 1862, while the royal couple was visiting the Peloponnese, a new coup deposed the King, and a provisional government was set up. Otto and Amélie were forced to exile back to Bavaria.

Throughout his reign, Otto was unable to resolve Greece’s poverty and prevent economic meddling from outside. Greek politics in this era were based on affiliations with the three Great Powers that had guaranteed Greece’s independence, Britain, France and Russia, and Otto’s ability to maintain the support of the powers was key to his remaining in power.

King Otto had loved Greece, or at least the one of his imagination. However, he could not understand or appreciate that Athenians and the people of Greece, needed a ruler and not just a guardian of its great past.

Adopt a stray and change two lives: its and yours