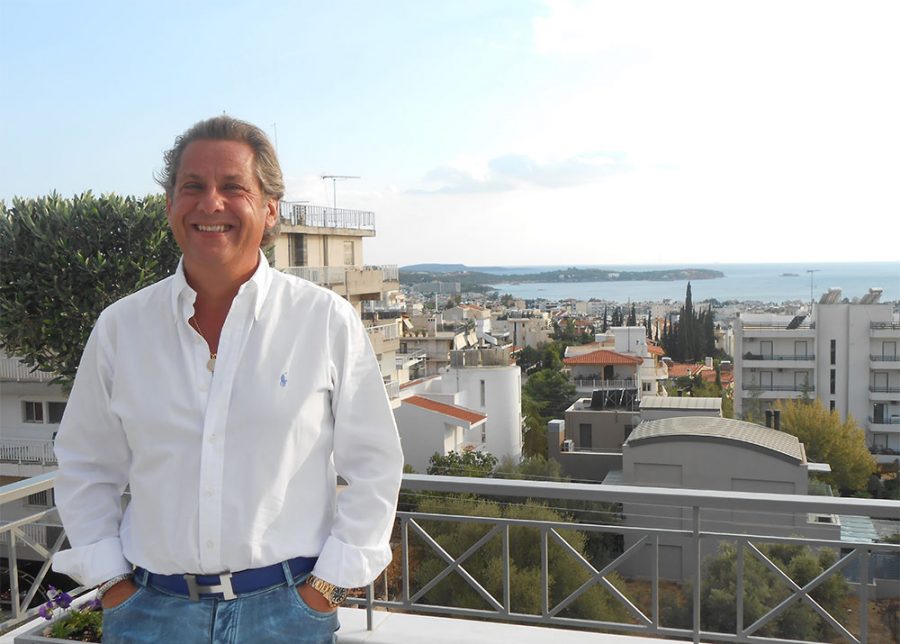 World-famous concert pianist Alain Lefèvre invites Insider’s Amanda Dardanis into his new Athenian home to discuss his latest Philhellenic album; why he moved to Greece – and a few of his pet hates.

As muses go, the epic Athens Riviera panorama which greets you the moment you enter Alain Lefèvre’s coolly-elegant penthouse in Voula, must take some beating.

I’m a little early and Alain is fine-tuning some phrasings from one of his new compositions ahead of his forthcoming Canadian tour (which he’s due to depart for the next day). Arguably, the glossy black Yahama enjoys the best vantage point of all in his spacious CD-lined salon. As well it should. For Lefèvre, the instrument been his passport to fortune, favour and a stellar international career that’s seen the 54-year-old become one of Canada’s foremost virtuosos.

Awarded Canada’s second highest honour, Officer of the Order of Canada, Lefèvre has released some 30 CDs and has garnered particular acclaim for reviving and championing the music of the prodigious composer and pianist Andre Mathieu, known as the “Canadian Mozart”.

Lefèvre’s heated Hellenic affair began two decades ago. Now – after making a change-of-life pact on his 50th birthday while on the island of Samos – he has fulfilled his dream of finally moving to Greece. He and his French partner Johanne Martineau left Montreal and set up home in Athens’ southern suburbs last summer. Since then, Lefèvre has harnessed the “relaxed ambience” of Riviera Life to stir his creative output.

The result is Lefèvre’s forthcoming sixth album of compositions “Sas Agapo”, to be released in mid-October, as a dedication to his adopted home. Most of the album, confesses the affable Canadian, was penned right here in this apartment with its majestic sweeping views.

‘When I am in Greece, I am in contact with something that inspires me,’ the French-born pianist admits.

A year into his new Mediterranean existence, Alain Lefèvre sports both an unshakeable tan and the inner glow of a man who has discovered his personal Eden.

Your new album, Sas Agapo, is quite literally a love-letter to Greece?

My decision to release this new album, which showcases pieces I have composed since moving here, is first and foremost a tribute to the Greek people, not just Greece. Greeks are generous and warm and free-spirited and I cannot recall having one bad experience with anything here in Greece. I think that what’s happened for the past 6 or 7 years is very humiliating for the Greek people. So this album is me saying, very modestly as a musician, to the Greek people that I do love you and I’m very proud of you. When I told my English CD label that my CD would simply be called Sas Agapo they said: “Yes but you will have to translate it.” I said, “You don’t translate that.”

You moved to Athens about 6 weeks before capital controls arrived. Any second thoughts at the time?

I had 8 people working here for me and suddenly someone said to me, “Alain, your money is locked”. But I did not worry. The world we are living in is somewhere where people like to be afraid.

So what drove your decision to stay?

Coming to Greece wasn’t for me a career choice. Because I can do what I do anywhere. I am 54 and there’s a time in life when you don’t want to spend one second losing any of it. You see something good, you take it.  And this is something good that I have found in Greece. In Greece, you are living your life more intensely. When you get old in Canada, no one wants to see you anymore. Go to the cinema and check the age of the people there and you’ll see what I mean!

When did you Greece first claim you?

I’m lucky. I’ve travelled a lot. It’s very rare for me to go to a country and not like it. But there’s something different about Greece. The Greek spirit is something else.

I’ve been coming to Greece for 20 years. I fell under the spell of Samos 15 years ago when they had their worst fire. I was supposed to do a concert there. I saw 10 enormous buses taking all the tourists to the airport to get out. Everyone was leaving. They asked me if I wanted to go too, but I stayed. (Lefèvre later staged a charity concert for victims of the blaze).

You become very protective when speaking of Greece. How do you feel when you read negative media reports about this country?

I can’t bear to listen to clichés about Greek people. We have the mainstream news telling us a lot of lies. For example, that Greek people are lazy and do not like to not pay their taxes. I travel all over the world and I know that the number one sport in the world is avoiding tax. The French government has just asked the UBS to hand over the name of 40,000 account holders in Switzerland who don’t pay tax. The Lancet in London in 2014 said that Greek people are working 20 percent more than any other European country.

How is your lifestyle here better than in Canada?

The fact is that I’m travelling and touring most of the year. So for the couple of months in between when I’m not, instead of freezing my balls off in Canada, I’m here looking at this.  Here, I can swim every day, even in December. Each day, you can find the perfect beach, depending on the wind or the sun. My first Athens winter was a milestone!

Which local landmarks have inspired you creatively?

I go to Kavouri a lot. There’s a very beautiful spot that I walk to past the restaurants: a little place where there are lots of rocks and then this little creek where there are always about 8 people swimming every day no matter what. I also like the swimming in front of En Plo (in Vouliagmeni). I’ve got a friend who swims there and she’s 84 and I kiss her every day and everything is so alive.

I also love the mood of Island (in Varkiza); Moorings (in Vouliagmeni) for the view. And there’s a little sushi place in Voula called Borocay that I love. When I adopt a restaurant, I bring everyone I know there.

Will Athens audiences hear you play this year?

On October 15, I’m performing a few pieces from Sas Agapo along with some other bits and pieces at a special concert at the Megaron for the Dionysia Trust.

Do you feel that classical music gets enough air-time? I read that you took President Obama to task for releasing a list of his favourite iPod tracks without one classical song among them…

Pop music is becoming an enormous problem. The whole mentality of the mainstream Hollywood-fueled pop industry selling their stupid movies and stupid singers. Greece is not exempt from that problem, it’s a world problem. Then you see a president of “the most powerful country” and this country has five of the best orchestras in the world; and probably 25-30 of the world’s best classical artists. And this guy didn’t even stop to think… or even ask someone in his office: “Maybe you should say that you like listening to Philip Aaberg or some other classical artist”. This is clearly traumatic. I never got a reply but I did what I had to do.

Has living in Greece changed your nature?

One day I was with some Greek people and one of them said: “Alain, you’re not Canadian, you’re Greek because you laugh and you’re loud and you’re relaxed. It’s because I’m happy here. So now I’m touring and I’m trying to make the tour as short as possible to be back here!

What is your favourite musical venue to perform at here?

The Megaron is very special in my heart.  When I first came to Greece many years ago I was very lucky to be under the protection of Christos Lambrakis who founded the Megaron. It’s one of the most beautiful concert halls in Europe.

What music do you listen to yourself to relax?

I listen to every music. But I’m a big fan of blues and jazz. And with no shame at all, I can tell you that I love Julio Iglesias and Barry White.

What do you get asked most at dinner parties?

When I’m invited to dine at someone’s place in New York or L.A. or Chicago, I will always be asked to play piano for them by the end of the evening. I will pay for my dinner.

That’s a bit cheeky. Do you mind?

I do mind actually. And I’ll tell you something, it has never once happened to me here in Greece. People here have a lot of respect. They would love me to play but they do not ask. And because of the fact that they do not ask, I do play. But you shouldn’t have to sing for your supper.

How is your Greek?

I have zero talent for Greek. I’m bad. I have a few words but they’re not maybe the best!

Which places in Greece have stirred you the most?

When I visited the tomb of Philipos (King Phillip II of Macedonia), it moved me to tears. Because I’m a big fan of Alexander the Great. I wish the Greek people would remember more where they came from. That would be my only wish.

What do you see from your balcony?

I see Paradise from up here.

Sas Agapo is available in Greece from October 28, but can also be purchased from www.analekta.com