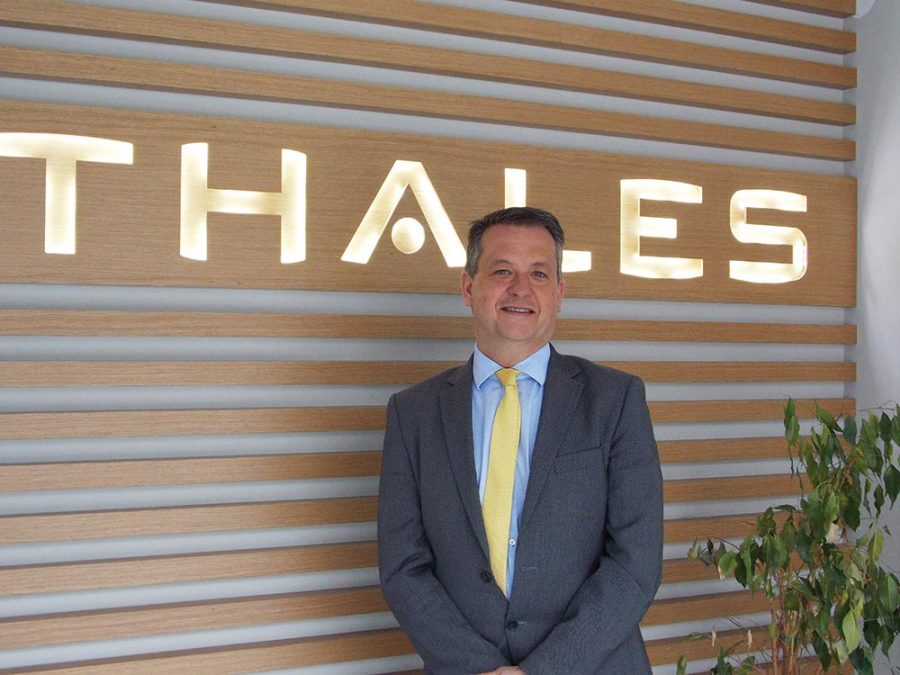 Greece Gets a Piece of the Sky

Speaking to Mr. Cyrille Dupont, CEO of Thales Greece, proves revelatory.  On the face of it, few have heard of Thales and even fewer know what a company like Thales does. When in fact, it is an invisible (and essential) presence in most aspects of our daily routines: Thales provides the signaling and train supervision system while you’re waiting to get into the Athens metro to go to work. It is at play when you make a bank transfer, when you board a plane … even when all you want to do is check the weather! In an exclusive interview with Athens Insider, Mr. Dupont touches on the exciting new phase of Greece’s fledgling space programme, cyber-security challenges and his belief in Greece’s unique positioning as a hub for international businesses.

You’ve just come back from a visit to Thales’ facilities in Cannes with the Greek Minister for Digital Media and Telecommunications, Mr. Nikos Pappas to inspect the progress of the new Greek satellite Hellas Sat 3, currently under construction. Could you tell us a bit more about Greece’s space programme and how it would translate into tangible benefits for Greek citizens?

Indeed. We are very excited to be part of Greece’s space programme. Mr Nikos Papas hopes to take Greece into a new era with the formation of the Greek National Space Agency and the launch of the new Greek satellite, Hellas Sat 3, which is in the final stages of production. The satellite has been built jointly with the London-based satellite phone company Immarsat but it will be controlled at Hellas Sat’s centre in Koropi, Attica and will be launched off the French Guyana coast on June 28.

This satellite is a telecommunications satellite, which aims to increase the data transmission capacity of Greece and its neighbouring countries.

Thales Hellas has an important role to ensure that technology transfers are promoted in the field of space technology, knowing that the European Space Agency operates on the so-called Geo-return model. In other words, if Greece invests 20 million euros into the European Space Agency, it must recover 20 million euros of activity (or the georeturns) and for that Thales has a real added value to make the Greek funds reinvested in the Greek economy.

The potential applications opened up by the new satellite include better surveillance systems for the army, advanced weather forecasting, flood prevention, surveillance of borders and monitoring wildfires. The Greek satellite will also offer an important new service to travellers, since it will be the only satellite providing internet access to airplanes in Europe.

Thales has supplied much of the country’s air traffic control systems as well as signalling systems for the mainline rail network and supervision and communication systems for the Athens metro. What new infrastructure projects is Thales working on at the moment?

Thales is one of the major players in railway signaling and railway telecommunication. Thales is currently installing two signalling systems – which will increase both the safety of high speed trains and the commercial speed at which these trains operate. Thales will be equipping the line from Kiato to Rododafni, near Patras and another line from Athens to the Bulgarian border in Promachonas. We hope to connect Corinth to Patras within 2 hours. This is in addition to the train supervision system of Line 1 of the Athens Metro.

Thales will upgrade signalling and telecommunications on a 73 km section of the Athens Patras line.

Thales’s integrated solutions will allow trains to travel at 200 km/h.

Thales has deployed signalling, communications and supervision solutions extensively both in Europe and elsewhere in the world, having equipped 30% of the world’s railway tracks.

How critical is Thales’ role in a world threatened by security issues and cyber-terrorism in particular?

We live in an interconnected world where information systems and the Internet play an increasingly important role in government, business and the everyday activities of private individuals. At the same time, persistent, targeted cyber attacks of growing sophistication have proven their potential to wreak havoc on our economies and threaten the integrity of our organisations. To address these new threats, ensure business continuity and safeguard our social fabric, cyberspace needs to be protected. Thales is in the business of data protection for decades.

We are the world leader in providing security systems for bank transactions. Around 80% of the world’s banking systems are equipped with Thales systems so hacking and cyber-security breaches are an aspect we are acutely aware of and something that we manage quite well. Thales stays ahead of the game by developing solutions that anticipate and counter these threats. We also are in constant contact with labs, research institutes and centres of learning, Thales also recently acquired Vormetric, a US company that is the global leader in cyber security.

Unfortunately cyber criminality is something we have to contend with. The target of these nefarious activities are either state governments or the media such as the attack onTV5 Monde a couple of years ago or companies such as Sony, the theft of industrial secrets, or high-risk facilities such as the electricity grid or nuclear power stations, airports, or trains – so you have to look at all the possibilities. I don’t want to sound too catastrophic but we have to prepare for every possible threat.  Our expertise spans every aspect of cybersecurity, from cryptology to intrusion testing, from risk analysis to security audits. It includes network security, operating system security and database security, security architectures, configuration and implementation of business applications as well as training and rapid response forces.

Thales has been consistently investing in young Greek talent. How fruitful has this strategy been for Thales Hellas?

Thales has been in Greece for the past 30 years but with a dedicated engineering unit devoted to the maintenance of Mirage only since 2000. We have been training highly-educated young Greek engineers with Thales methodologies and standards. We have a core group of highly qualified engineers who are responsible not just for Greece but also for our neighbouring countries Cyprus, Albania, Romania, FYROM and Kosovo. We believe that Greece offers a highly-skilled, motivated work force when you provide them with a conducive work environment. In the case of Thales for example, since 2015, we have also been responsible for all 22 of NATO’s sites in Europe and our Greek engineers who monitor these sites are referred to as ‘flying doctors’. So our initial investment in training these young engineers has paid off and we are now a skills-hub for all of Europe.

You wear many hats – you are the head of the French Trade Advisors in Greece and of the French-Greek Chamber of Commerce. How difficult is it to run a business in Greece?

Running a business is challenging and I don’t think being a CEO in Greece is significantly more difficult than elsewhere. My observation – in my role as a representative of French business interest in Greece has been that all French companies who were present here  – have furthered their investments and presence here. Except for the banking sector, all the key French companies have demonstrated their faith in Greece.

Always hire people who are aware of their weaknesses before those who claim to know it all.

Greece: All it can Be!