Menu
Home | Travel | Get Captured by the Castle in Methoni

Get Captured by the Castle in Methoni 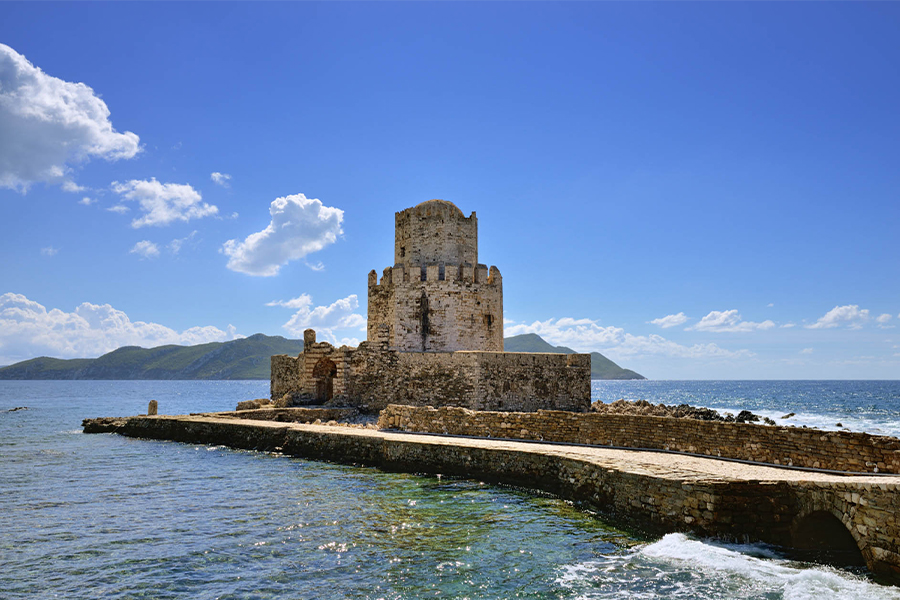 The more things change, the more we cherish those that stand still. Sherri Moshman Paganos visits Methoni again after 20 years and finds an unpretentious and lovely castle town by the sea that has resisted the tides of change. 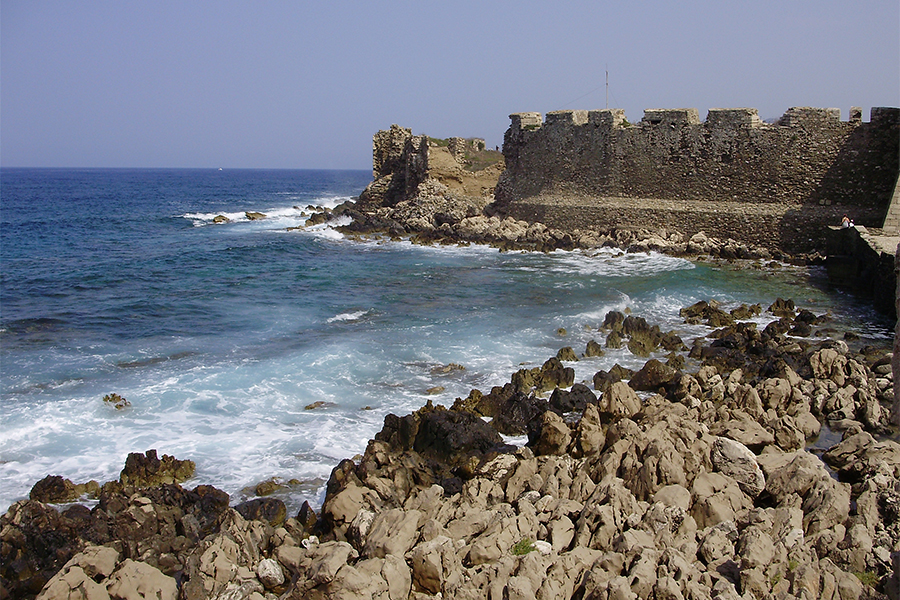 Methoni wears her beauty simply, effortlessly.  A long sandy beach, shade from the tamarisk trees, a sea always calm and crystalline, little yachts moored out to sea and nearby mountains, make Methoni a feast for the eyes. Relaxing and laid-back, this Messinian town on the Ionian Sea in the southwest corner of the Peloponese _about four hours’ drive from Athens) has hardly changed since when I first went there 20 years ago.  Blessed like many Greek seaside towns, Methoni nevertheless offers something special, a reminder of her Venetian past, with one of the largest Venetian fortresses in Greece.

Fortresses, writes Nikos Kazantzakis in Journeys to the Morea, “exert a mysterious fascination on man’s soul.”  Gazing at the castle complex from the beach, it is hard not to feel this fascination.  We are used to looking up to castles on hills, such as in Koroni, Methoni’s sister city (together they were known as the «eyes of Venice»), Pylos or the impressive Palamidi in Nafplion.  The castle in Methoni, however, extends from the town itself, on part of a rocky promontory, surrounded by the sea on three sides.  Although the western side is rocky and the sea always rough, making it unapproachable, the calm sea on the eastern side made fortification necessary. 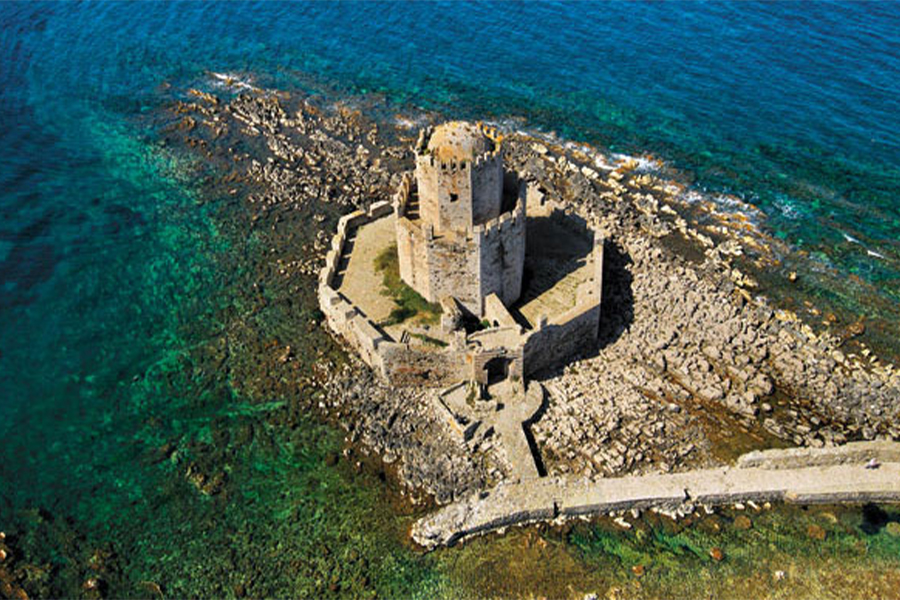 The original entranceway into the fortress across the moat was a wooden bridge, used until 1829, when it was replaced by the one used today, that has 14 arches. When you enter through the gate with its Corinthian columns, you step into the world of the 13th century, the early Venetian period.  As usual, the Venetians built on top of existing Byzantine structures, and the Byzantines of course used the top of ancient ruins. As far back as the 7th century B.C. Methoni had been fortified. In ancient times the town was called Pedasus, and Homer referred to it in the Iliad, as one of the cities (“vine-rich…near sandy Pylos”) offered by Agamemnon to Achilles to subdue his rage.  Pausaunus, the indefatigable 2nd century traveler, refers to it as Mothoni in his travels, named for “mothona”, a mythical rock.

Venice had its eye on Methoni from the 12th century, as the town was a well-known stopping point on the route between Europe and the Holy Land.  The Venetians finally conquered the town in 1209, ushering in the 1st Venetian Period, until 1500, when the castle prospered and reached its peak. On a hot sunny day in August, crickets singing incessantly, sweat pouring down my face, I walk through, exploring the intricate passageways littered with cannonballs, until I find myself in the interior, the large area called the Piazza Grande d’Armi, which at the time had been a paved market street, a bustling commercial area full of merchants, vendors, shops and wooden houses for the Venetian lords.  Still left in the area is a huge purple granite column found in a shipwreck, brought there in 1493.  At the top of the column, you can make out the winged lion of St. Mark, the patron saint of the Venetians. 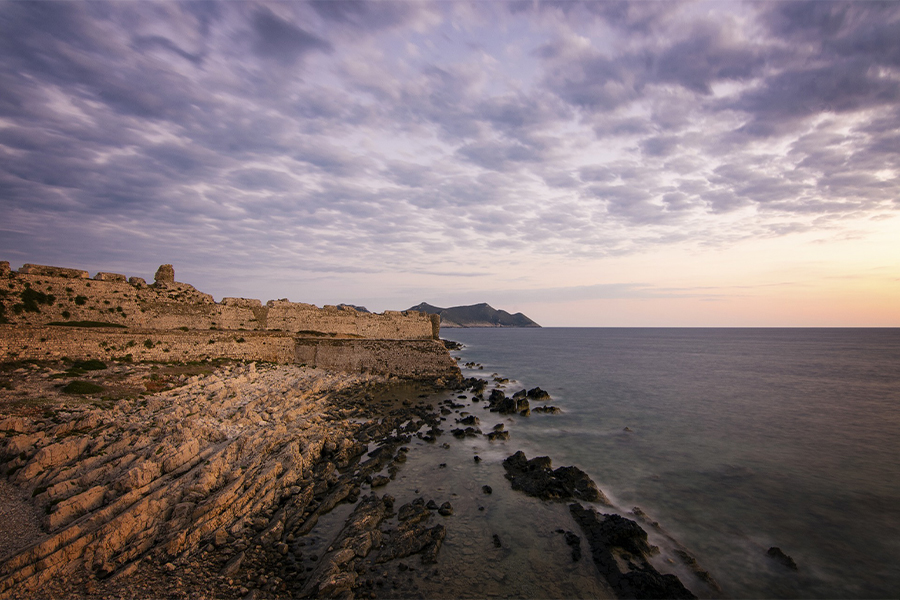 A small walkway leads you to a tiny rocky islet where you see the octagonal Bourtzi tower, built around the same time as the one in Nafplio, in the early 1500’s. At this time, the Ottomans had seized the fortress from the Venetians and gave the name Bourtzi to the tower (after Turkish “burz” meaning “fort”). The Ottomans held the fortress until 1685, when the Venetians recaptured it until they lost it again to the Ottomans in 1715. The tower had various uses: as a seat for the guards who were watching the fortress, as a lighthouse, a shelter in times of siege, but mainly as a prison and torture ground. During the winter when gusts of wind blow and high waves crash against the rocks of the western side, it is said that the sound is the moaning of unjustly killed prisoners of Bourtzi. 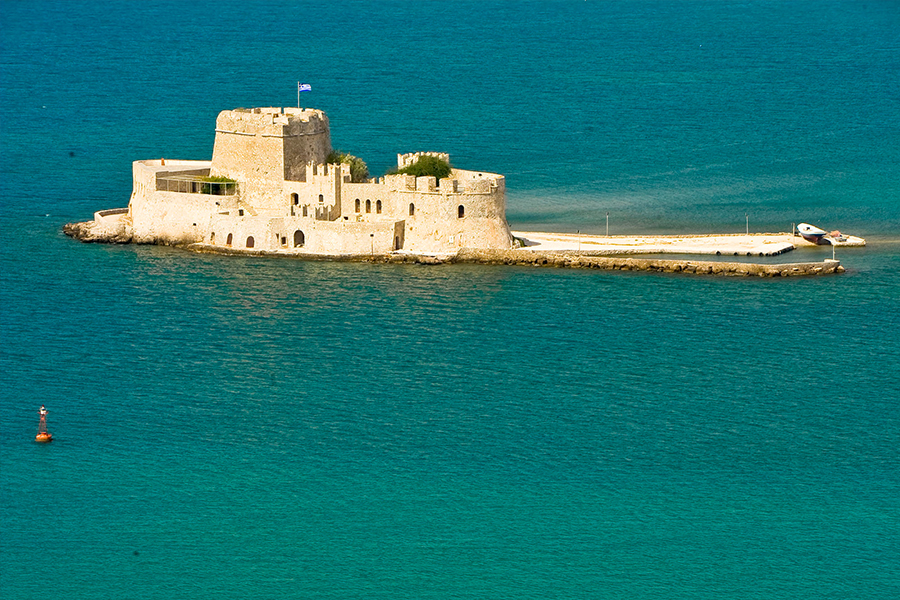 Even on a hot summer day, a walk through the fortress is a must (entrance ticket to the castle is 2 euros and it is open from 8:00 to 15:00, closed on Monday), knowing your “reward” afterwards is to enjoy a swim and rest in the shade, as most visitors do. When you visit a place after many years, it is natural to look for evidence of change – it’s inevitable – I notice the Methoni Beach Hotel has put up umbrellas in the place where there used to be pedal boats and canoes, but as far as I can see, that’s the only difference. The volleyball net seems exactly in the same place, in front of the Rex Taverna, parents are putting suntan lotion and floppy hats on their toddlers, happily digging by the water.  Besides Greek, families are calling to each other in French and Italian.

The pre-dinner activity is to watch the sunset fall into the Ionian sea from the cliff across from the castle and then have dinner in one of the tavernas like Klimataria, which has been serving delicious food for over 20 years (I could still remember the taste of the tomatokeftedes that they served) and other very good tavernas such as Nikos and Palia Istoria.  There’s Rex, where you can see the last stragglers out of the sea, and if you want to be as close to the water as you can get without actually being in it, Akroyiali, next to the castle, has two entrances, one from the beach, and the other from the sea.  This is to let you order lunch and take a swim while you wait. I had dinner there one night where you could look down and see fish in the water, which complemented perfectly our htapodakia, kalamaraki, sardellas and garides with ouzo. 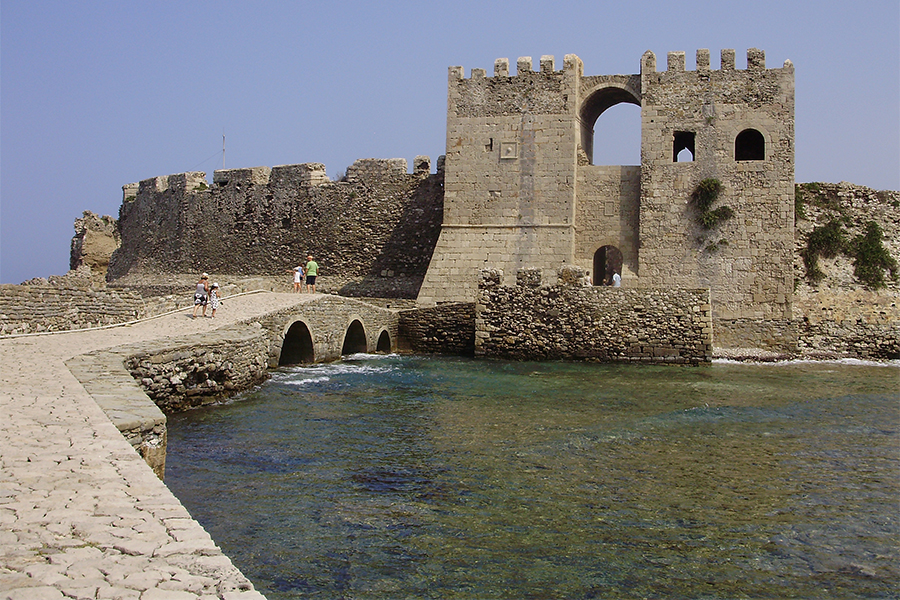 Besides the Methoni Beach Hotel, right on the beach, next to the old moat, there is also the Achilles, and many other small hotels, including older hotels like the Alex– with large balconies in front, looking off to the water, and the Aris, on the square with a large Venetian well, preserved from the 15th century.  Mr. Aris, who has been running the hotel for 28 years, agreed that he likes the quietness of Methoni and the way it has stayed – “peaceful, not like Finicounda”.

“Not like Finicounda”– that’s what you hear a lot. Eleven km from Methoni, Finicounda is an example of a resort that has changed.  Larger, and more built up, with bars cafeterias and nightlife, and organized umbrellas and seabeds, Finicounda has become touristic in every way Methoni has not. But the sea there is still gorgeous and crystal clear.  And both Methoni and Finicounda cater very much to families. They both also have organized camping, full of trailers from Greece and abroad.

The loveliest and most unusual beach in the area is “Voidokilia” beyond Pylos, next to Costa Navarino (and about 27km from Methoni).  Laid out in the shape of a Greek omega, not a tree in sight, Voidokilia is breathtakingly beautiful with its white sands and green sparkling sea, but if you go without an umbrella and plenty of water, you won’t last more than a few minutes out of the sea.

After Voidokilia, I had planned to end our trip with a last swim near Pylos, and then take the inland road toward Kalamata, but Methoni beckoned for me to return for one last swim, as I gazed with wonder and fascination at the castle just down the beach in this unpretentious lovely seaside town.