Menu
Home | People | Adventures in Greece’s Past, and Present, in the British School at Athens

Adventures in Greece’s Past, and Present, in the British School at Athens 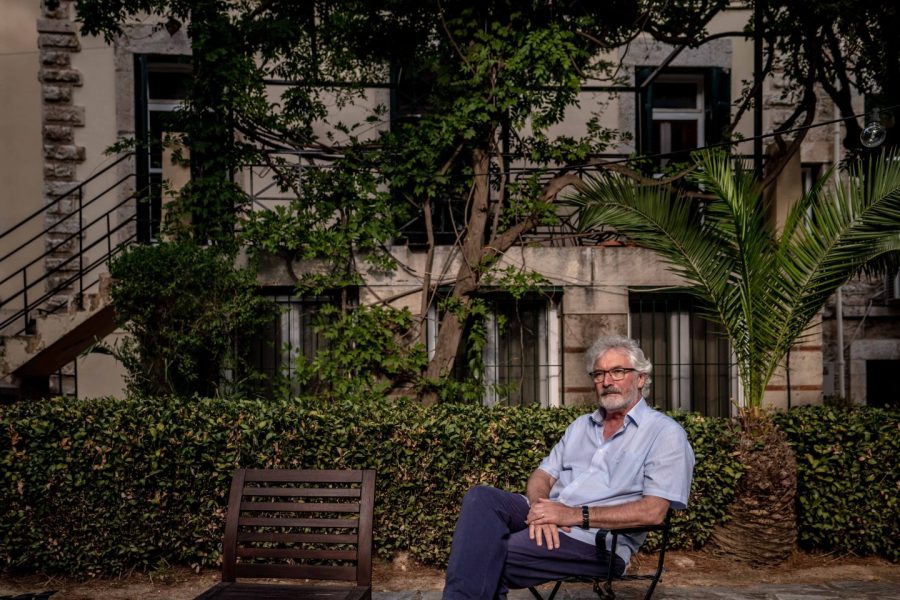 Ranbir Sidhu in conversation with John Bennet, the Director of the British School at Athens, on the fascinating world of archaeology and the insights it offers into the way societies lived, interacted and evolved.

When John Bennet first arrived at the British School at Athens in 1981 for a two week stay, he had no idea that over forty years later he’d be back there, but now as the School’s director. At the time, he was preparing for a research trip to Crete. “Those are among my happiest memories,” he says, speaking of those first, youthful days in Athens and his summer in Crete. He was a young doctoral student in archaeology, studying at Cambridge University, and would go on to complete a doctoral dissertation examining the island’s history in the last centuries of the second millennium BCE through archaeology and the Linear B tablets excavated at Knossos. During his initial time on the island, in the years 1981 to 82, he worked on excavations at Knossos focusing on the Minoan civilization, which ended around 1,200 BCE. 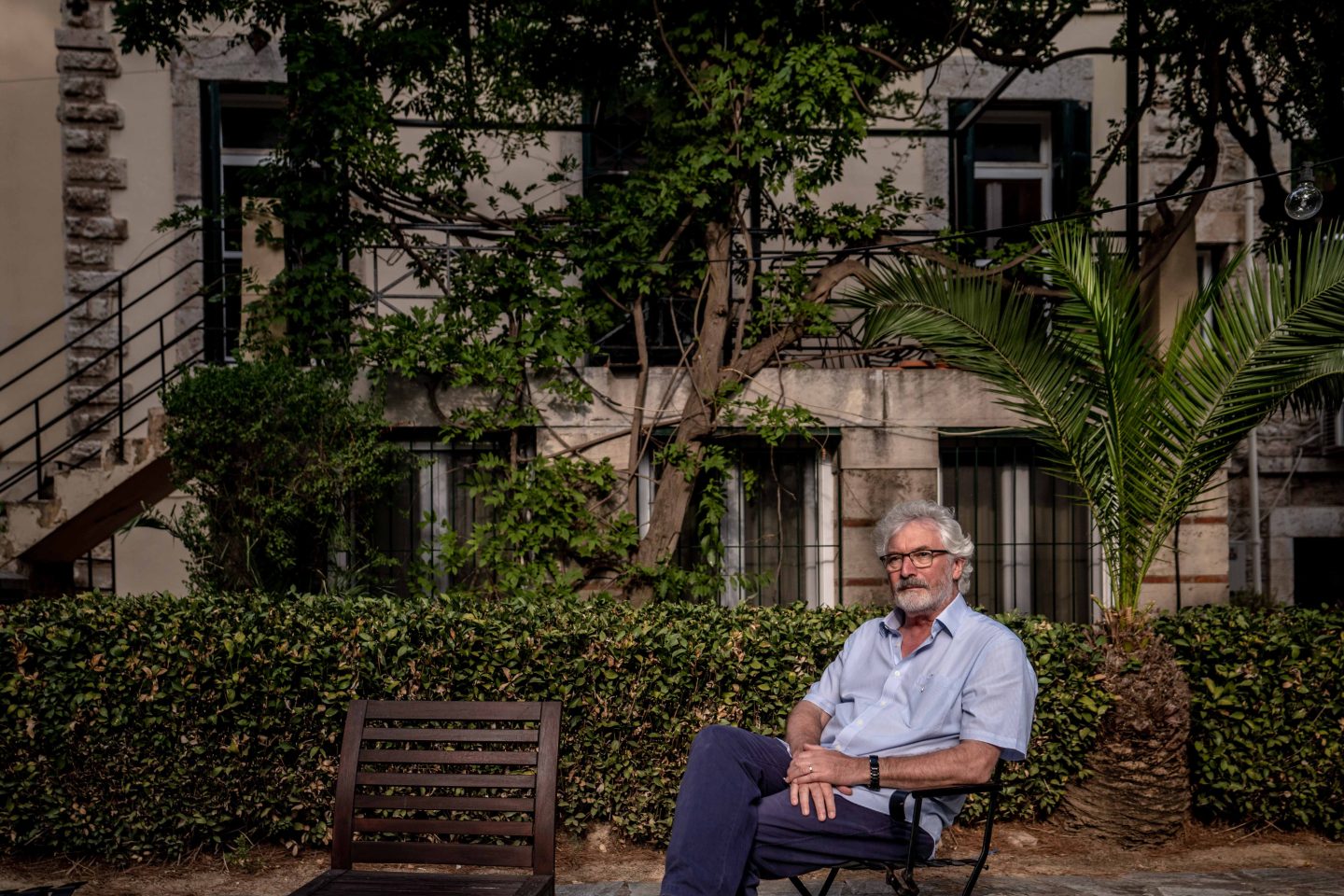 John Bennet at the British School at Athens ©Nikos Karanikolas

We talk in the gardens of the British School, or the BSA, sitting on what is known as the Finlay Terrace, named for George Finlay, a noted Scottish philhellene whose extensive library and papers came to the BSA in 1899.

Even entering from the relative calm of the Kolonaki neighborhood it sits in, the grounds feel like another world. Gone is the city’s chaos, and you can almost sense the generations of scholars who passed through here to work not only on Greek antiquity, but also the modern nation’s rich history.

The garden, dotted with palm and olive trees, is threaded with stone paths, and above us, a grand old wisteria with its lilac flowers in bloom shades us from the afternoon sun. 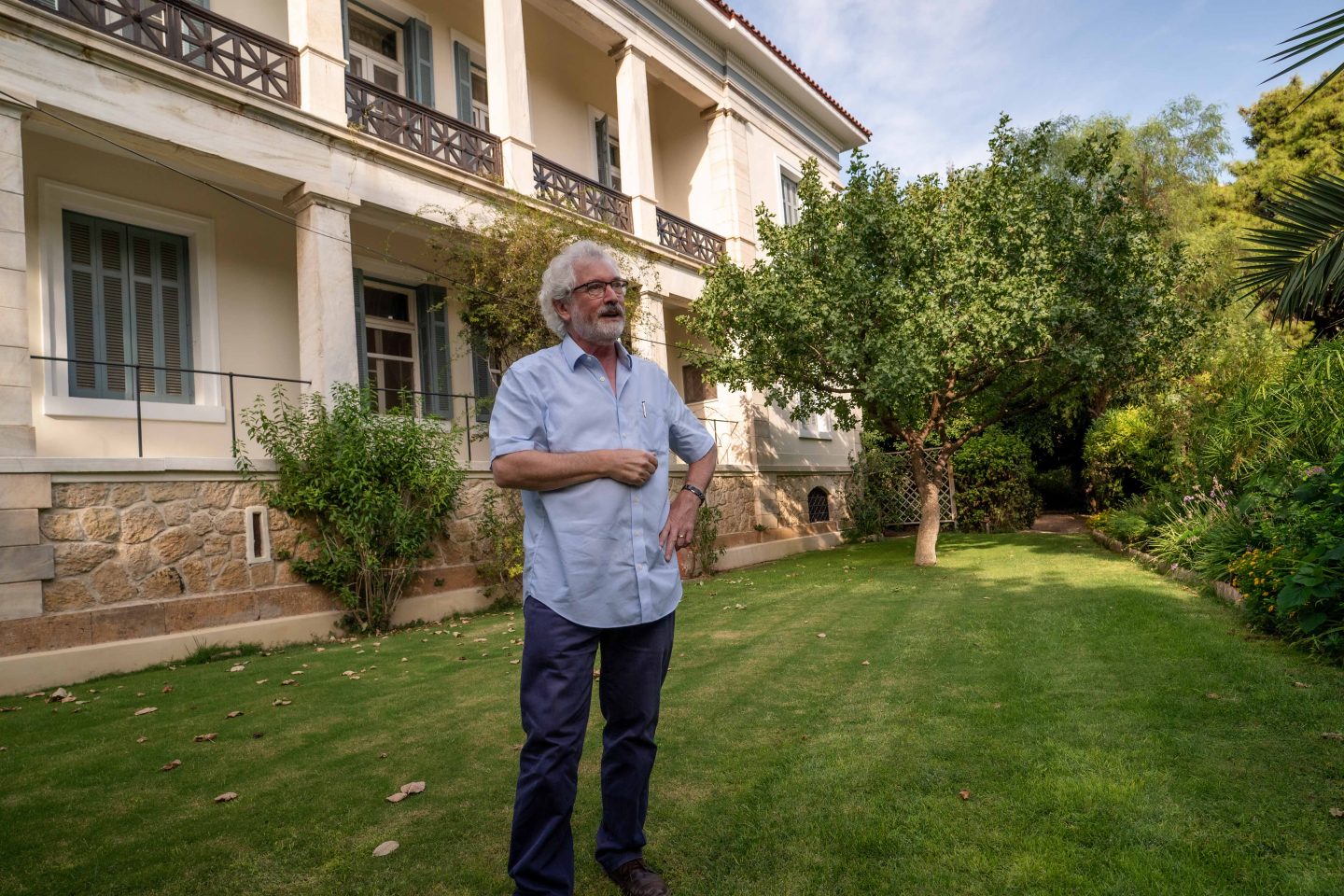 Founded in 1886 by Francis Penrose, an architect who conducted important early research on the Parthenon, the BSA was the last of the original four foreign schools to find a home in Athens in the 19th century. It shares grounds with the American School of Classical Studies, whose work has focused on the Agora in Athens and ancient Corinth. One of the prime movers in the early days was Richard Jebb, who oversaw the donation of the land the British and American schools are built on, which has given the BSA the stability it needs over the decades to regularly expand its activities. 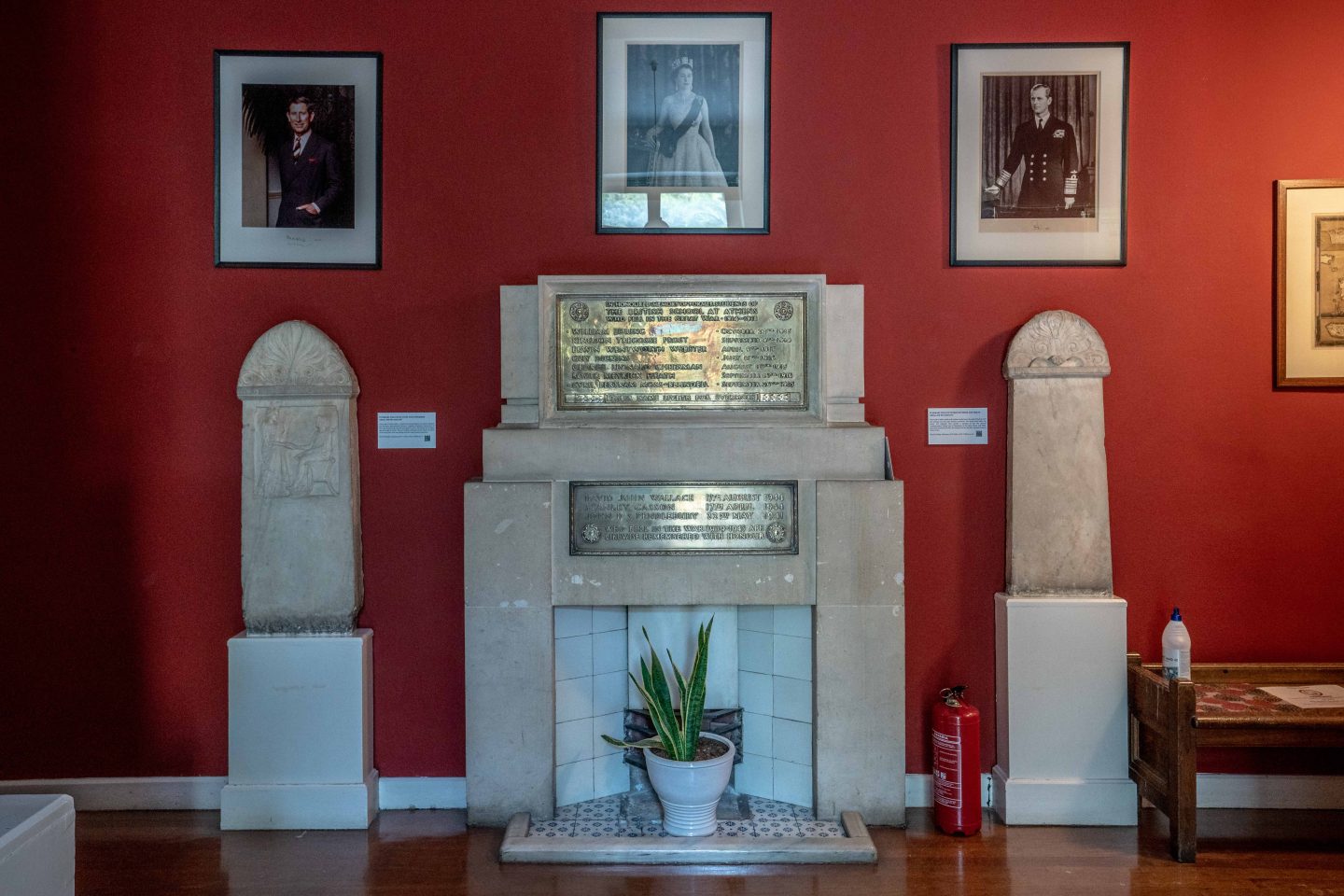 The library at the British School at Athens

The first schools, the French and German, carved out their own niches, as did the other schools later in what Bennet says some have described as a kind of “crypto-colonialism.” The Germans worked at Olympia, while the French concentrated on Delos and Delphi.

After independence, Bennet tells me that Greece was a pioneer in enacting a formal antiquities law in 1834, in an effort to prevent damage to and unauthorized removal of antiquties.

Initially lacking funds, the BSA was able to expand its archaeological projects in 1895 when it received a five hundred pound grant from the British government, which allowed it to begin its first large-scale excavations on the island of Milos. “From then we quickly expanded our focus to Knossos in 1900,” Bennet explains, “and to the beginnings of a long-term research involvement in Sparta in 1906.” At Sparta, their excavations included the Sanctuary of Artemis Orthia and the theatre, and they would go on, in the 1920s, to significantly extend their work around the theatre. 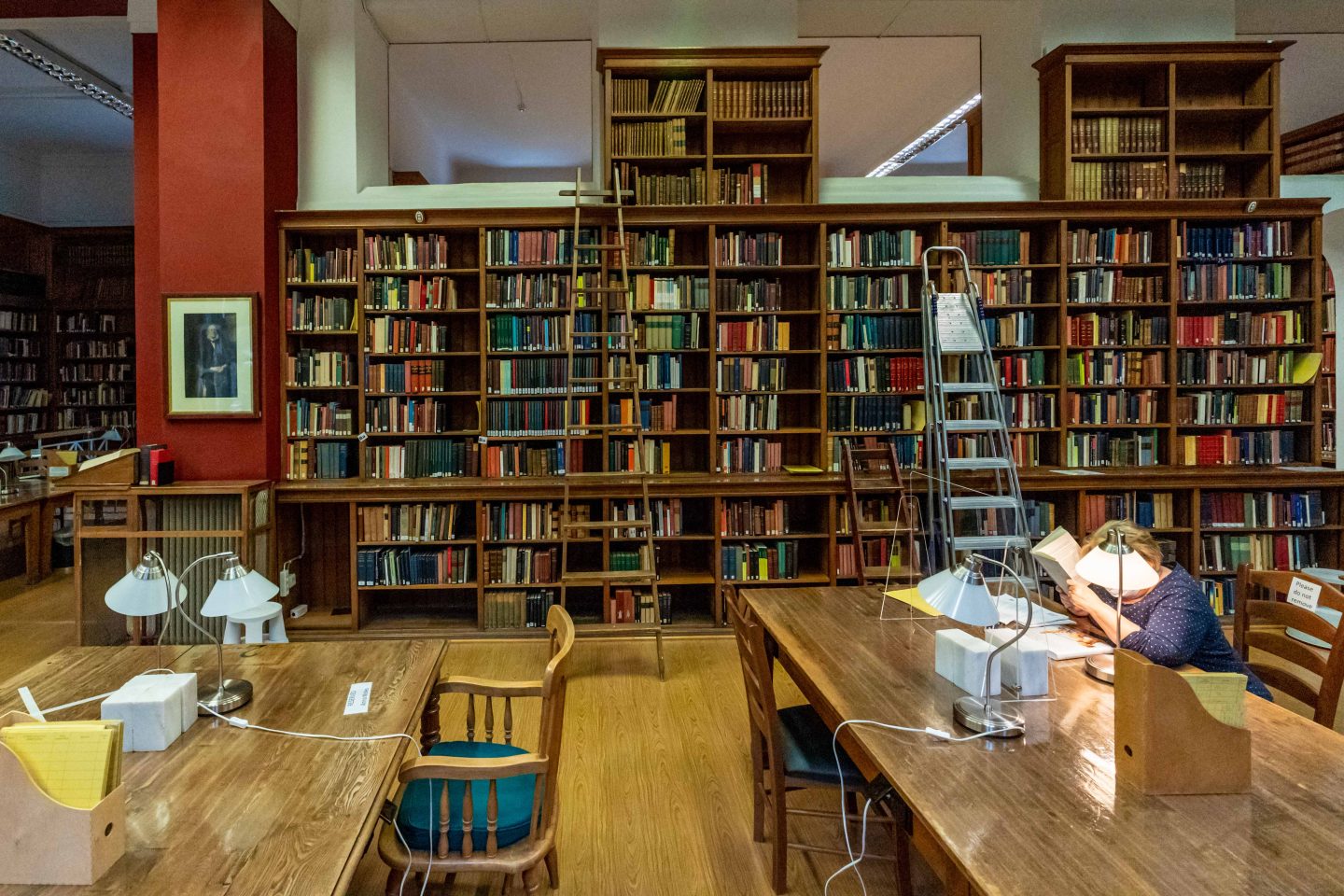 The library at the British School at Athens

These two areas remain at the heart of the BSA’s mission in Greece, and it continues to maintain a research facility at Knossos. Recent projects at Knossos include an archaeological survey of the entire ancient city, followed by a geophysical survey of the Roman era site in an attempt to understand the urban layout from that period, and a detailed environmental investigation studying patterns of consumption and the role of agriculture in the Bronze Age.

Today, the BSA comprises a series of neoclassical and more recent buildings, the earliest designed by Penrose himself. Two of the buildings housed the Swiss and Swedish offices of the Red Cross in WWII, and now form the heart of the BSA’s Fitch Laboratory and part of its visitor housing. The Fitch is a state-of-the-art facility specializing in petrographic and chemical analysis of inorganic materials especially pottery, but also supporting other areas of science-based archaeology. “For example,” Bennet says, “it allows us to trace the movements of pots in the ancient world. This doesn’t always correlate with the movements of people, but it can help us understand how societies interacted.” 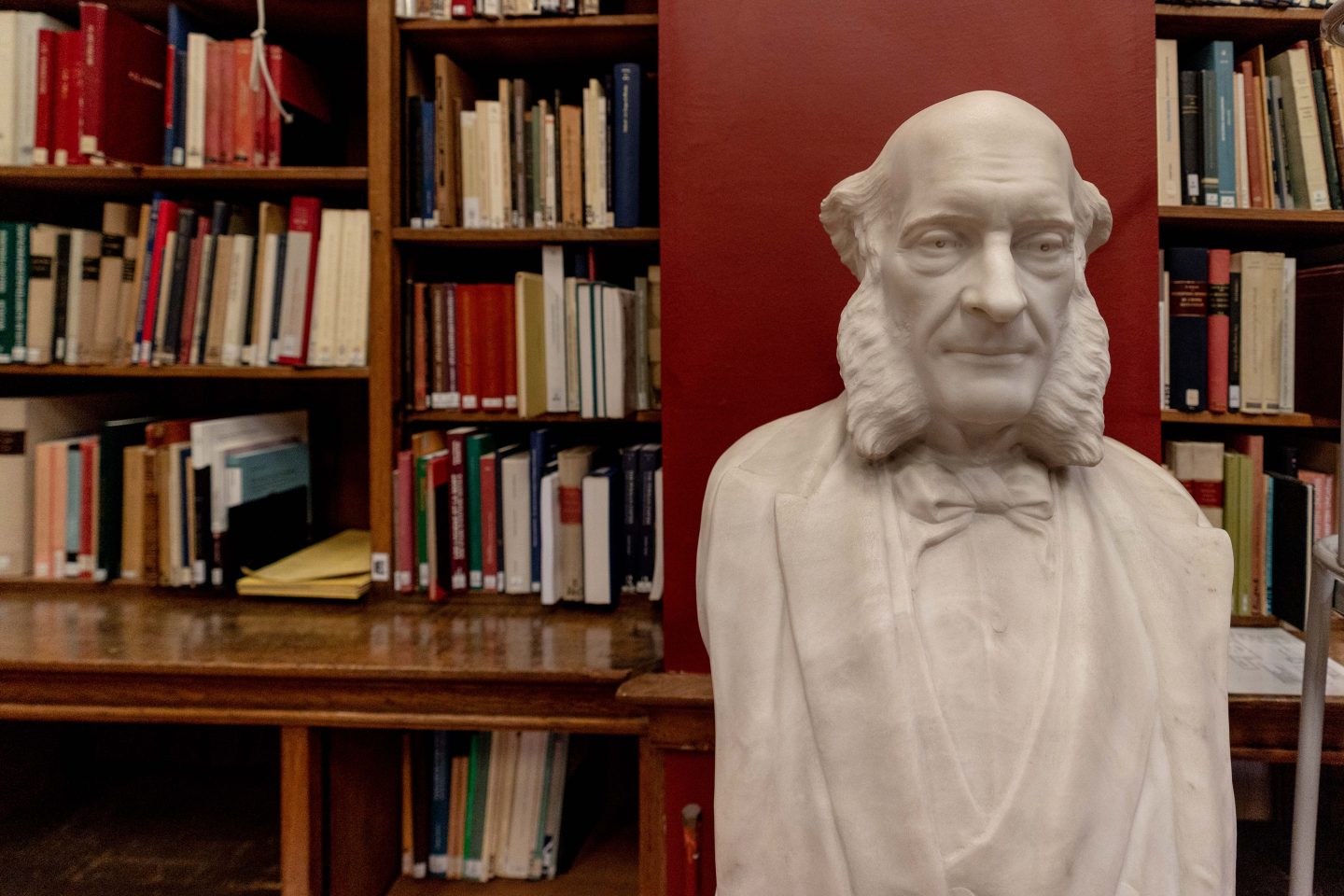 One way to look at movement in the ancient world, and the world today, is to look at how techniques for the production of material culture move through space. The Fitch houses a large database on the clay-composition of amphorae in the ancient world. It has been used, among other things, to examine links between the Aegean and the western Mediterranean. “Pots are not people,” Bennet asserts, “but by looking at how techniques move, we can see how ideas move.” This interest in technique is informed by an interest in modern potters and how techniques pass from one generation to the next. “When looking at the ways techniques are passed on, I wouldn’t necessarily call it oral transmission, but tactile transmission. One potter teaches another with his or her hands.” Therefore, the anthropology of modern-day artisans has become a vital interest in the BSA’s attempts to understand the ancient world.

The question of migration, and how not only peoples but also ideas move, remains an important research focus of the BSA. On the island of Kythira, the BSA team was able to show that at after 2000 BCE the island potters significantly shifted how they made pots. For centuries they had followed mainland manufacturing traditions, but around this time they began to use Cretan, or Minoan, techniques, signalling the expanding influence of Minoan culture north of Crete. The BSA’s interest in migration is not limited to the ancient world. A recent A.G. Leventis Fellow in Hellenic Studies, Eirini Avramopoulou, focused her work on trauma and memory among present-day refugees at the island hotspot on Leros.

The Covid Pandemic has brought many changes to the BSA over the last two years, many of them positive, Bennet tells me. It’s pushed it to speed up a major digitization project begun 11 years ago. The goal is to bring online as many of its documents and holdings as possible, and to make these available to anyone in the world aided by a simple keyword search. “We’ve also developed a map function,” Bennet says, “where you can find materials by clicking on an online map of the region and to identify material that interests you.” These link to specific documents, projects, and images of the locations. “One of the great benefits of digitization is that it allows scholars to examine documents and artifacts without the chance of damaging them.” Like many institutions, it’s also adopted a shift for its lectures and seminars to Zoom, allowing people all over the world to join while storing a record of the event online. 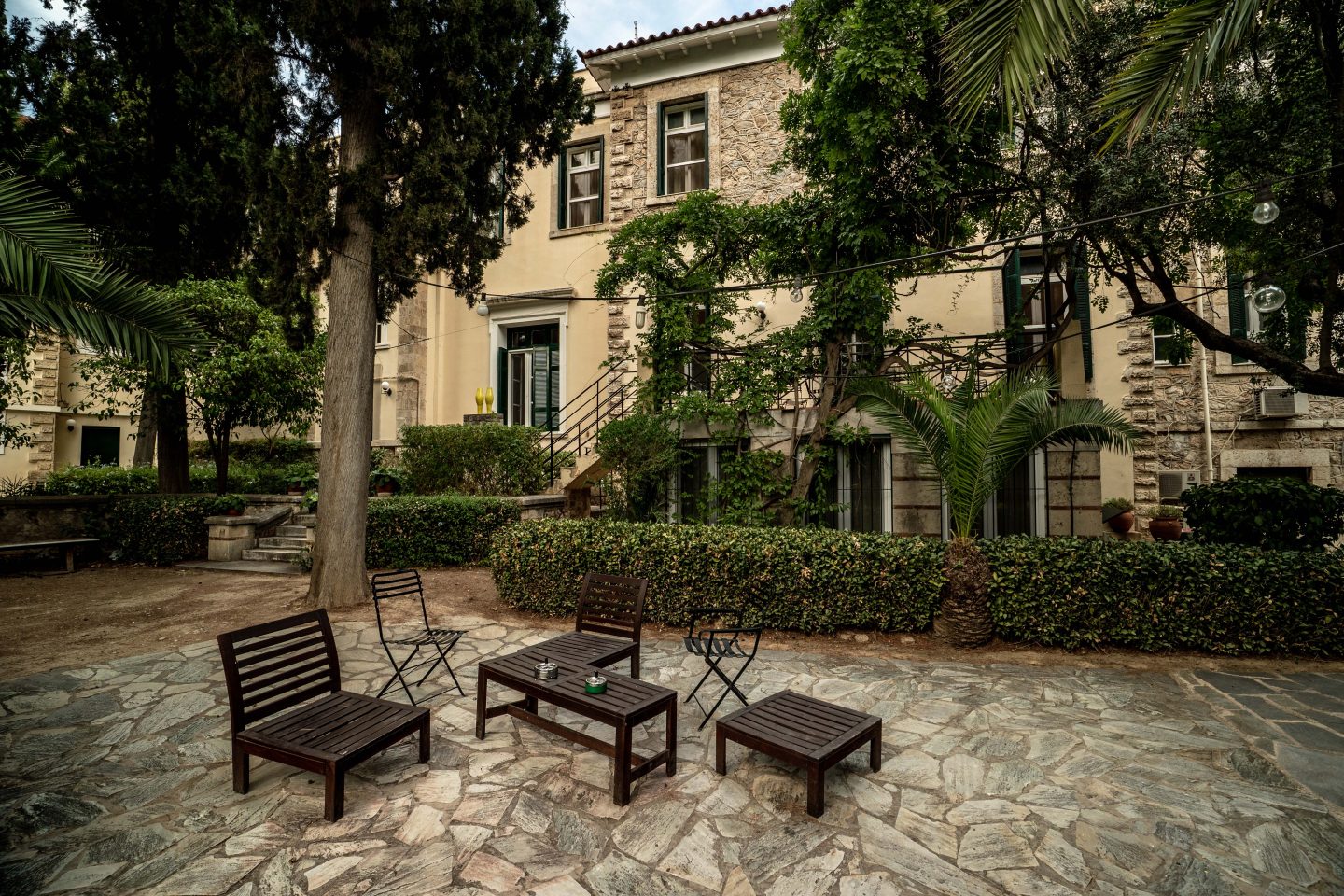 In September, Bennet will leave his position as director after seven years. He’ll be returning to the University of Sheffield, where he holds a Chair in Aegean Archaeology. He also taught at the University of Wisconsin and at Oxford University. In addition to his work at Knossos, he carried out studies on the island of Kea and in south-central Crete. Perhaps what’s he’s most proud of in his professional life, he tells me, is the detailed surface survey project he and colleagues conducted around Mycenaean-era Pylos in the 1990s. Using multiple different techniques and bringing together multiple disparate disciplines (as archaeology often does), the project examined the prehistoric and historic settlement of western Messinia, and has so far resulted in the publication of several major books.

In September, the new director, Rebecca Sweetman, the BSA’s third female director, will formally take over. One of the projects she will be inheriting is a growing interest at the BSA to look at the climate emergency, and ask questions about what archaeology can teach us in terms of dealing with what’s happening in the present. The project remains in its early stages yet, but involves collaborations with the other British International Research Institutes spread throughout the world, with an attempt to look at the anthropology and engineering of water management from the deep past to the present. Another project is to complete a fundraising drive to reimagine the BSA’s Knossos Research Centre and hopefully create opportunities to expand the BSA’s activities and to reach an even wider audience.

Bennet tells me he will miss the “little oasis in central Athens” that is the BSA, and particularly the warmth and hospitality he’s encountered throughout his many travels in Greece. And the extraordinary landscapes and history that are always in such easy reach of any resident of Athens. The sheer depth of history, and the deep knowledge and interest that so many communities have for their own local history has always impressed him. And of course, the weather, he laughs.

A Nomad’s Soul Finds a Home in Greece: the John Craxton exhibition at the Benaki Museum