Menu
Home | Travel | Live the Life that Paddy did

Live the Life that Paddy did 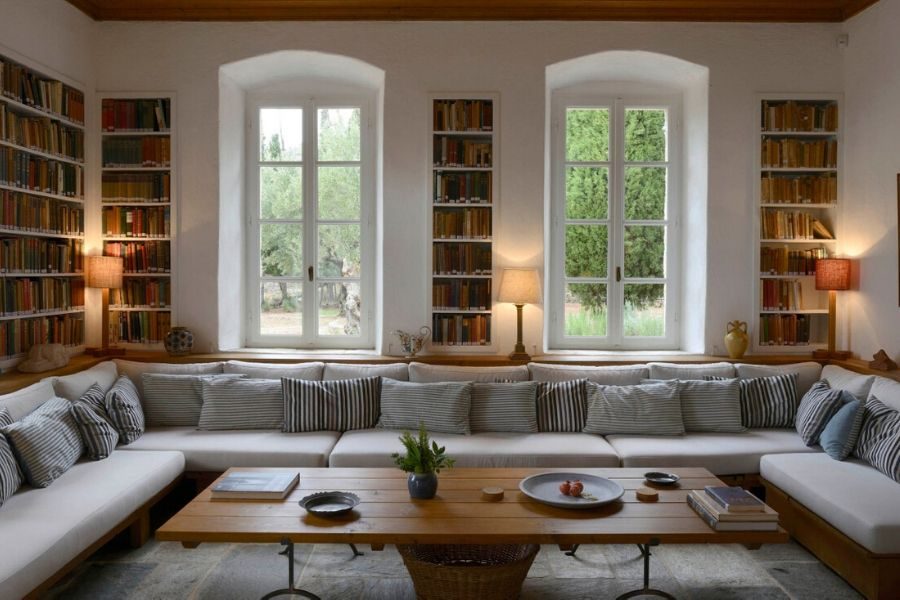 Writer’s retreat, cultural salon, museum showpiece … the charmed life of the Paddy Leigh Fermor House in the Mani is about to embark on one of its most colourful incarnations yet, as it prepares to open its storied doors as a luxury boutique hotel from June 15, writes Amanda Dardanis.

In Greek mythology, the Elysian Fields were a land of perfect happiness that lay at the end of the Earth – a final resting place for the souls of the virtuous and the heroic.

Patrick “Paddy” Leigh Fermor would be the first to admit that his libidinous appetite for life often landed him squarely in unvirtuous terrain. But heroic? Certainly. The decorated British writer, author of cherished travel tomes A Time of Gifts and Roumeli: Travels in Northern Greece, loved to live dangerously. One of his most recounted episodes was disguising himself as a shepherd named Michalis in Crete during the second world war in order to daringly kidnap a German general. 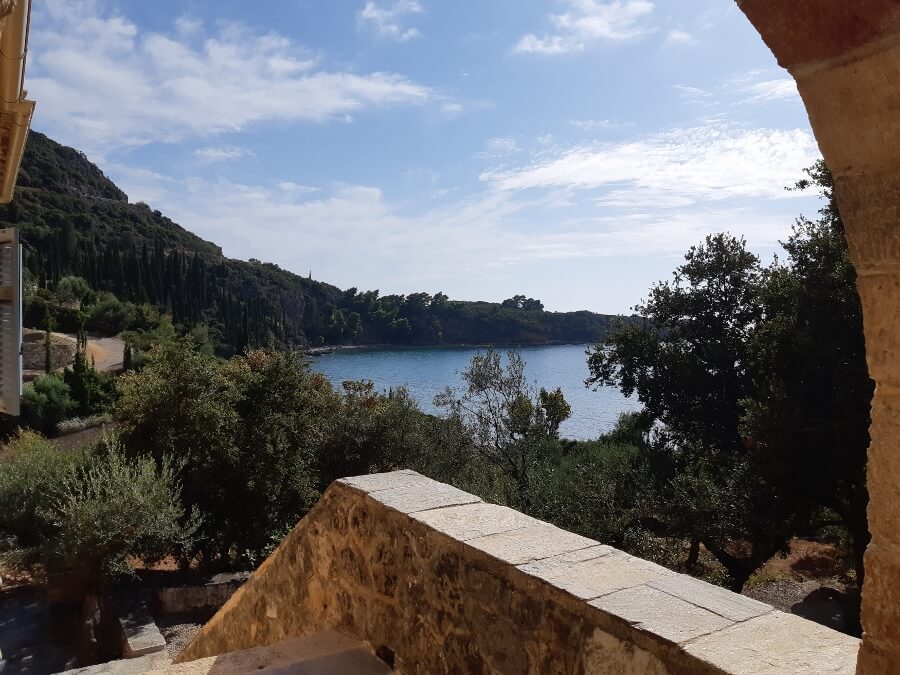 More than anything, Leigh Fermor was a restless romantic with wanderlust in his veins. There’s a perfect Greek word for it. Leventeia. It translates to “charm, generosity, high-spirits, an agility of mind, body and action, a readiness for anything.” But in the end, it was the remote Greek village of Kardamyli, in the southwest Peloponnese, that literally stopped this erudite wanderer in his tracks. It was a coup de foudre. Paddy had found his own Elysian Fields.  And that’s where he stayed almost continuously until his death of cancer in 2011, aged 96.

To Joan, his wife-to-be, an accomplished photographer who remained by his side until her own passing in 2003, he wrote of “crescent-shaped beaches” and “a world of utmost magical beauty … thick with magnificent olive trees”. Later, in his definitive Mani: Travels in the Peloponnese, he would wax of green transparent waters and off-duty fishermen sitting under mulberry trees, watching the sun sink over the monumental mountains that sealed Kardamyli off so tantalizingly from the rest of Greece and gave the village its splendid isolation. (These days you can fly in to Kalamata airport and take a twisty road over the Taygetus range). 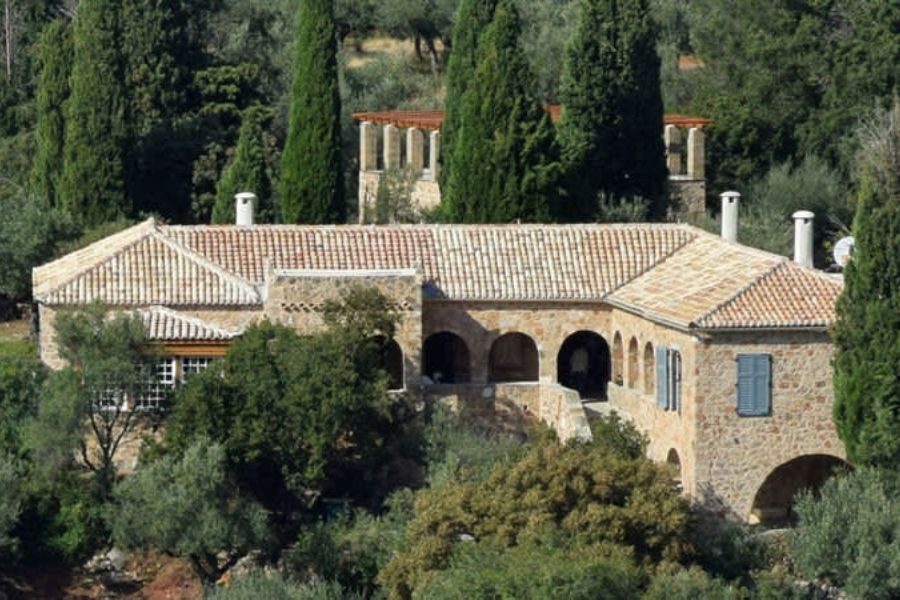 It is through such romantic imagery that Leigh Fermor made both Kardamyli and the untamed Mani peninsula internationally famous. In this reclusive utopia, he and Joan built their dream house on a rugged cliff that tumbled down to a peacock-blue bay, flanked by stone arches, light-filled annexes, olive groves and cypress trees. They fashioned their home from peach and russet-hued limestone, gifted to them by locals who still referred to him fondly as Kyrie Michalis.

It was here that the cultured couple passed countless summer evenings in the swoon of conversation and wine, moonlight and warm air, in the company of the intellectual and artistic elite who happily made the trek to visit them. People like Nobel prize-winning Greek writer George Seferis, Nancy Mitford, the English painter John Craxton and the Prince and Princess of Belgium.

In 1996, Patrick and Joan bequeathed their beloved estate to the Benaki Museum with the express wish that after they’d gone, it would host intellectuals and scholars who sought to work in an inspiring environment, in one of the loveliest properties in Greece. In recent years, members of the public have also been able to take guided cultural tours of the 9-acre residence with its gargantuan library of 5,000-plus books (even the bathrooms have bookshelves) and its fascinating insights into the life of one of the 20th century’s finest and most charismatic travel scribes. 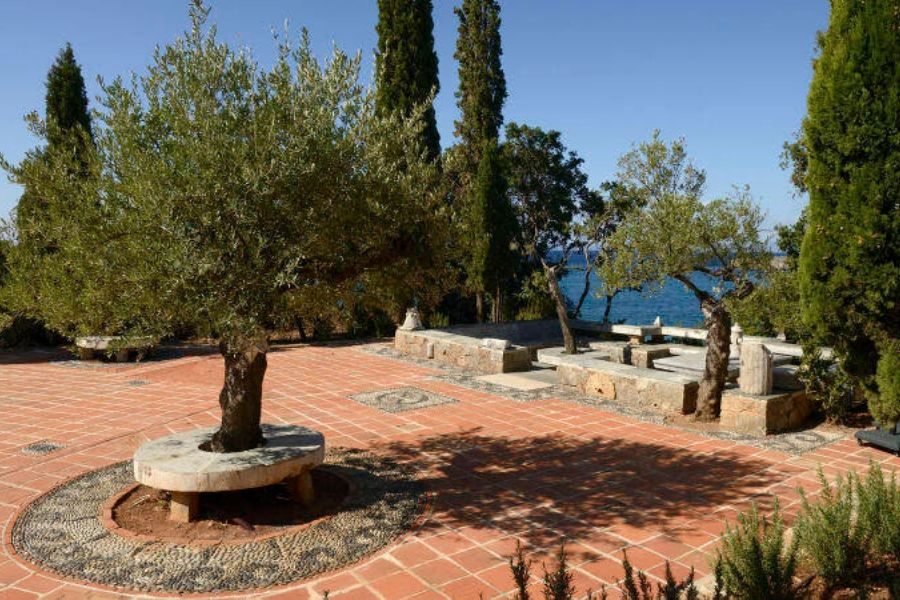 But now in an exciting new chapter, the idyllic Maniot retreat is preparing to open as a luxury boutique hotel for three months of every year. As part of the Leigh Fermor’s bequeath, the Benaki will collaborate with Aria Hotels, a sophisticated hotel and villa company that offers authentic retreats in restored, historic Greek properties.

From 2020, people can rent the villa throughout the summer period in parties of between two to fourteen people. More specifically, there will be five guestrooms, each including a bedroom, an independent workplace (equipped with basic office equipment) and bathroom. Three of the guestrooms will be in the main house where the bedrooms are connected by an arched colonnade, an intentional echo of the Greek monasteries that Leigh Fermor had visited. The fourth guesthouse will be located in the studio where he used to work and write; and the fifth,, at the secondary stone house. To foster sociable interactions in the tradition of the Leigh Fermors, there will be communal spaces such as the main living room that has coffered Ottoman ceilings and ogive fireplaces inspired by Paddy’s Eastern travels. Outdoors, scattered amid the lush gardens, there will also be several scenic sitting areas – some punctuated by serpentine pebbled patterns designed by the great Greek artist Nikos Ghika. (Insider has been told that rates will range from €300 a night for the individual houses – including breakfast, concierge and cleaning, and use of the outdoor pool – and from €2,200 per night for exclusive use of the entire villa.) 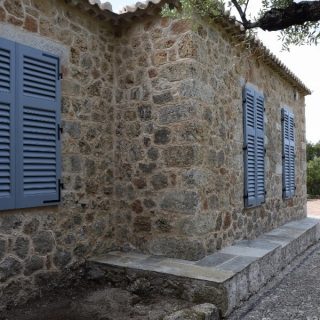 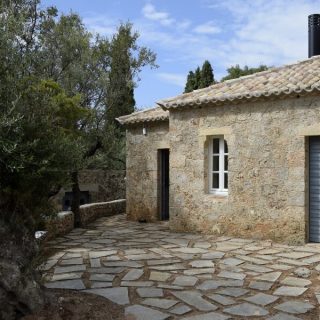 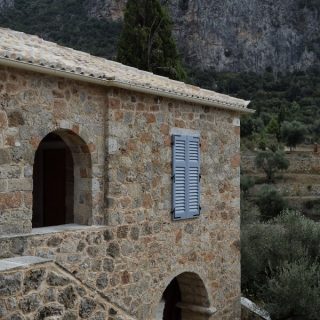 The project allows literary lovers the thrilling prospect of walking in Leigh Fermor’s actual footsteps. Every day, well into his 90s, he would descend the cylindrical staircase that drops down from the garden to a private beach below. From there, he would swim hundreds of metres to the nearest islet, Meropi. Then, after losing himself to his creative endeavours in his studio for several hours, he would fully embrace the Mediterranean siesta to prepare for the late nights that invariably lay ahead:

“The afternoon is the time for real sleep,” he wrote. “Into the abyss one goes to emerge when the colors begin to revive and the world to breathe again about five o’clock, ready once more for the rigors and pleasures of late afternoon, the evening, and the night.” 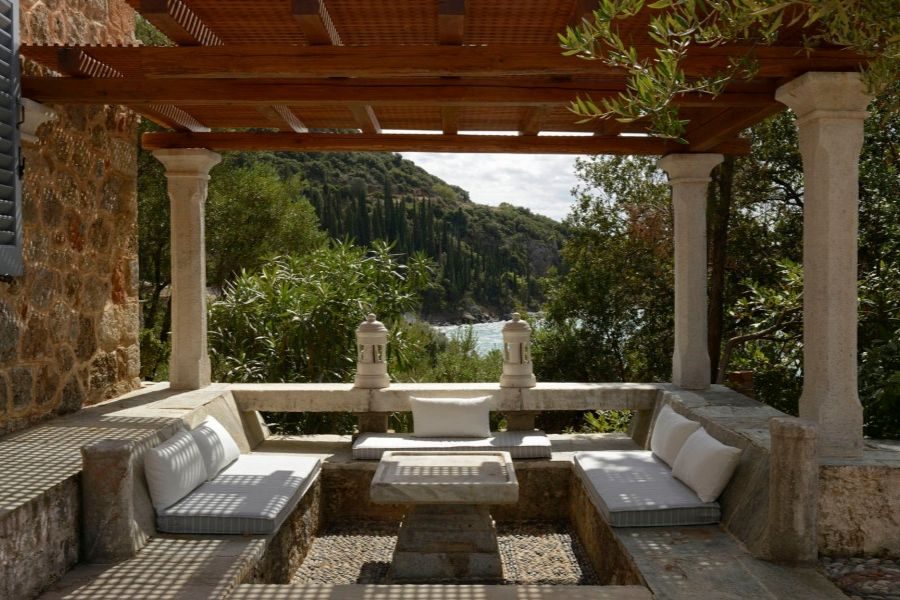 “It doesn’t get more authentic than staying in the preserved and restored home of someone who loved Greece and everything that Greece represented,” says Gareth Zundel, of Aria’s parent company the Libra Group. “He’s iconic both among Greeks and Brits. This house is the embodiment of what an authentic holiday experience should be – because here you can live the life that Paddy did.”

Careful renovations and repairs are well underway. Overseen by the Benaki Museum, architects Maria Kokkinou and Andreas Kourkoulas and electrical engineer Pandelis Argyros (whose father designed the property’s secondary house in 1969) are preparing the notable estate to receive paying guests while still preserving its look, feel and spirit.

Interior walls have been replastered using the same technique as the Leigh Fermors to retain the same rough texture. New roof tiles now lie underneath the original ones (salvaged from Peloponnesian homes destroyed by earthquakes) in order to preserve the distinctive ochre, red and yellow tint. Electrical and plumbing systems have been replaced, and central heating and air-conditioning installed for the first time. Doors, window, shutters, stone lintels and the wooden beams of two pergolas have been supplanted with exact copies of the old ones. Meanwhile, much of the couple’s furniture and other items are being restored by the museum’s conservation department and will be returned to their original place before the opening. And what of Leigh Fermor’s much-envied book trove? It’s currently being catalogued by the Benaki’s library staff who will return a selection to the house to be made available to guests as a small lending library. 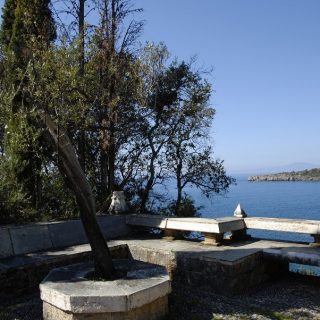 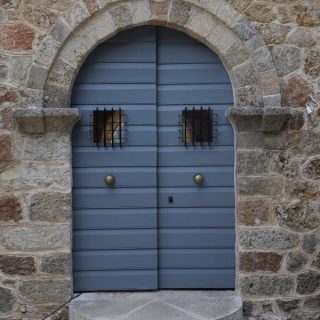 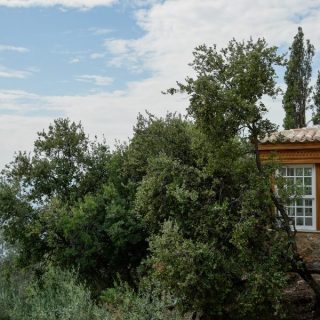 Paddy Leigh Fermor had been searching for two decades to find somewhere in Greece that spoke loudly enough to him, to compel him to settle there. In this magical corner of the world, he finally found a place as magnetic as he was. The stars aligned. Kardamyli had been immortalized in ancient times by his beloved Homer in the Iliad, when Agamemnon offered up the “citadel of Kardamyli” to Achilles. Now, it is Leigh Fermor himself, this unforgettable chronicler and adventurer, who has assured Kardamyli a place in modern history. For those lucky enough to secure a booking at this enchanting bolthole where so many stories still reside within its sun-baked walls, be warned, it may be the start of a very long love affair with the Mani peninsula. In the words of the man who knew it best:

“In order to see its soul you need three lives. One for the sea, one for its mountains and one for its people.”

To enquire into making a booking at the Patrick Leigh Fermor House, visit here  website

How to inject soul and sophistication into a safe design solution