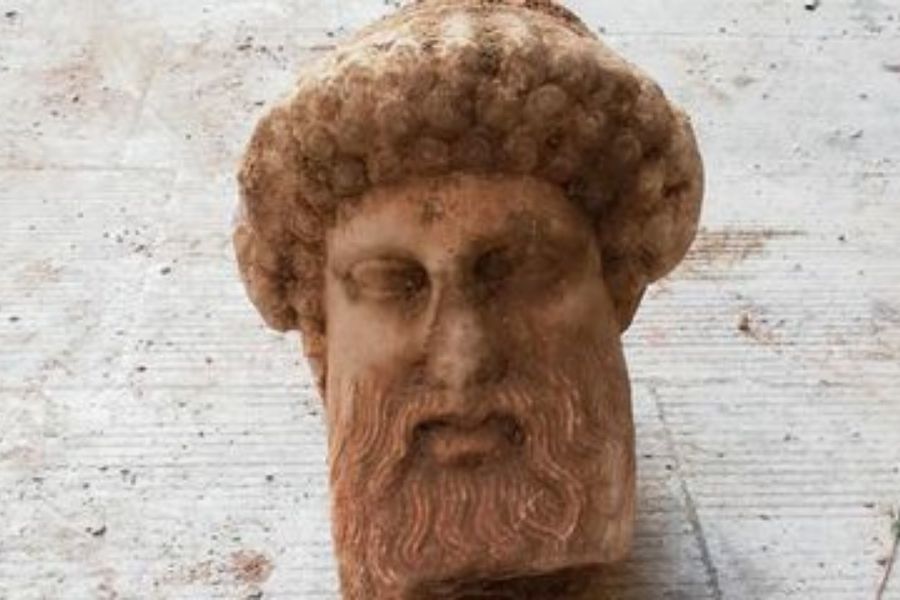 Only in “anything goes” Athens might you expect to bump into a Greek God, lingering outside one of the city’s best-known bar districts on a Friday evening. That’s exactly what happened when the 2,400 year-old head of Hermes rolled into view in Agia Irinis Square.

Only in Athens could you expect to bump into Gods and saints, lurking after-hours outside it’s best known bars on a Friday evening. Ag. Irinis is the city’s de facto bar district – its bars have a reputation that attract millennial instagrammers and regulars and now it seems, even Gods. The head of ancient Greek god Hermes was unearthed during sewer work, on November 12, culture ministry officials announced.

It was a bust that most likely dated back to around 300 B.C, the Associated Press reported. While most depictions of the ancient “winged messenger” god are youthful, this one showed the god, who goes by Mercury in Roman mythology, at “a mature age,” the culture ministry said.

The Greek sculptor Alcamenes was most likely the artist, the AP said, citing the ministry. Alcamenes flourished in the second half of the fifth century B.C., according to Encyclopedia Britannica, renowned for his delicate and finessed details of his works.

Back in his heyday, Hermes was associated with the protection of cattle and sheep, though he became better known via “The Odyssey” as the messenger of the gods (he is famously depicted with winged feet), and the deity who guided the dead to Hades. He was also credited with inventing the lyre.

This particular bust, found at a depth of 1.3m, was at one point probably a street marker, the culture ministry said, and at some point was built into the wall of a drainage duct. And so it was ignominiously interred, until the sewage project brought it to light.

Lockdown Living: Greek Gods show how to thrive in this comic Quarantology series